THE CURRENCY OF COMMUNISM at the British Museum

A fascinating temporary exhibition that looks at aspects of money in Communist-ruled countries. 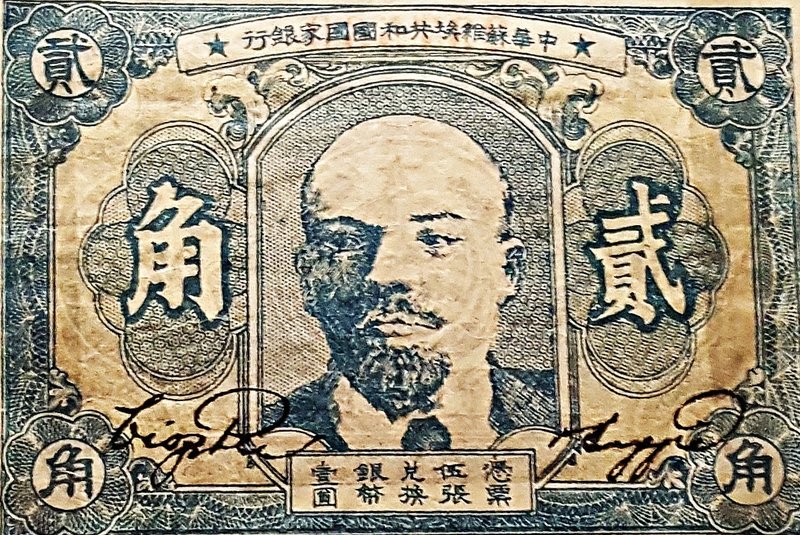 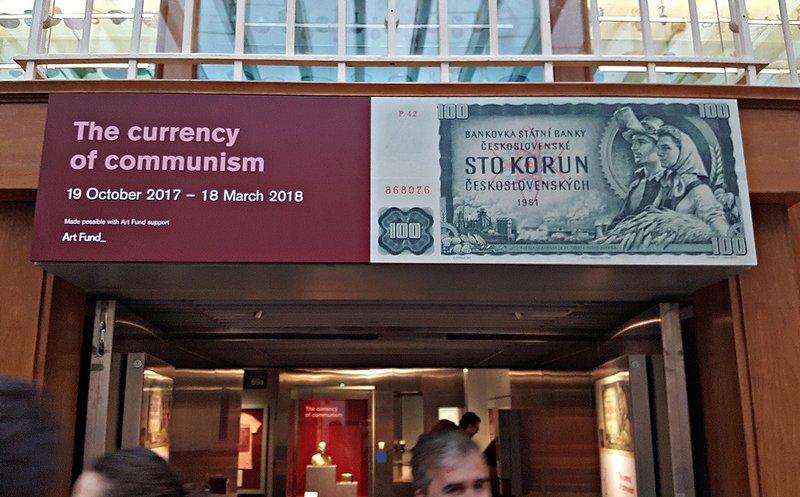 Entrance to room 69a

An article by Michael Harrison, who writes a great deal about Socialist art and culture, attracted me to this small but fascinating temporary exhibition at the British Museum (see: http://michaelharrison.org.uk/2018/01/currency-communism-role-money-socialism/).

The political theorist and philosopher Karl Marx wrote in 1844:
“By possessing the property of buying everything, by possessing the property of appropriating all objects, money is thus the object of eminent possession. The universality of its property is the omnipotence of its being. It is therefore regarded as an omnipotent being. Money is the procurer between man’s need and the object, between his life and his means of life. But that which mediates my life for me, also mediates the existence of other people for me. For me it is the other person.”

The Communist regimes that rose and fell during the twentieth century understood this as well as any other regimes, capitalist or otherwise. They issued coins and banknotes for their people to save and spend. As Stalin said in an interview held in 1952 near the end of his life (see: https://www.wilsoncenter.org/sites/default/files/ACFB07.pdf ):
“Since commodities circulate there has to be money. In capitalist countries, financial institutions, including banks, contribute to the impoverishment of workers, the pauperization of the people and the enrichment of the exploiters. Money and banks in capitalism act as a means of exploitation. Our money economy is not typical, but differs from the capitalist money economy. Here money and the limited money economy act in the strengthening of socialist economy. For us the money economy is an instrument that we take hold of and use in the interests of socialism.” 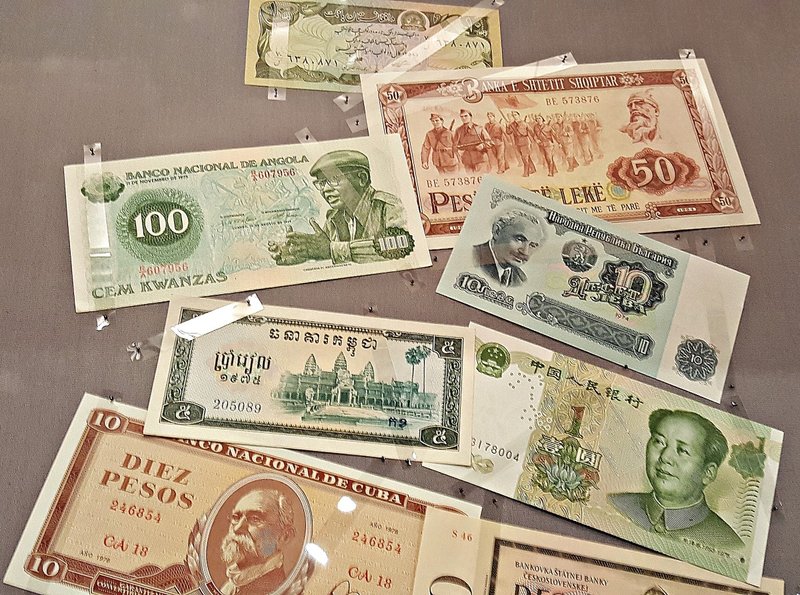 Assorted banknotes including an Albanian one

This exhibition at the British Museum displays examples of currency issued by Socialist governments in many continents. I am not sure that it demonstrates what Stalin meant, but, as with banknotes and coins issued all over the world, it served the governments who issued it as a vehicle for propaganda. Apart from their historical value, many of the banknotes and other exhibits are fine works of art. 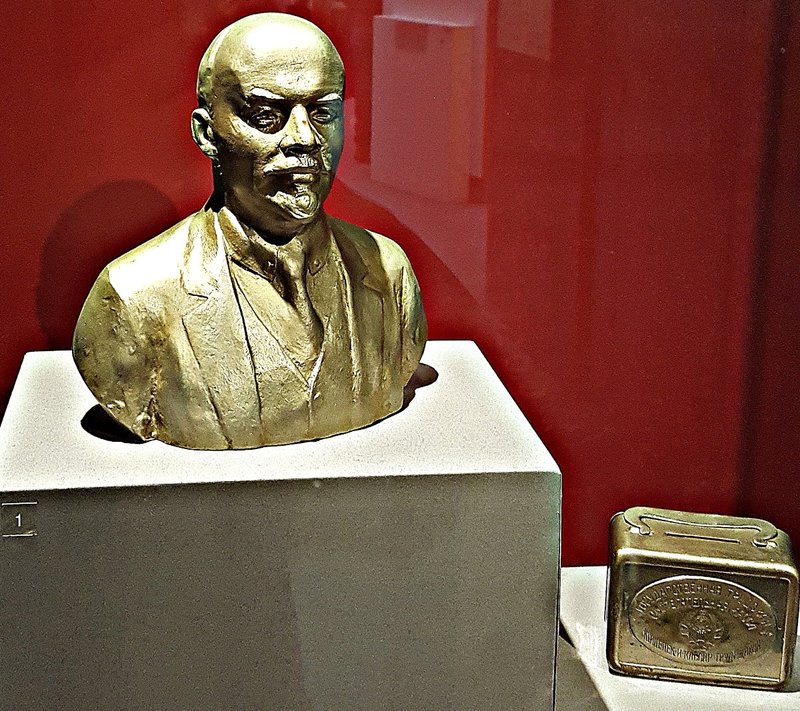 Lenin and a Soviet money box

Immediately opposite the entrance, there is a bust of Lenin alongside a money box embossed with Soviet insignia. The Soviets were keen on getting people to save money, especially in the state-run savings banks. Several colourful posters exhorting people to deposit their money in banks are on display – to save for the future of the USSR was clearly virtuous. There is also a poster discouraging people from corruption and reliance on the ‘black market, in the years between the Russian Revolution and 1939. 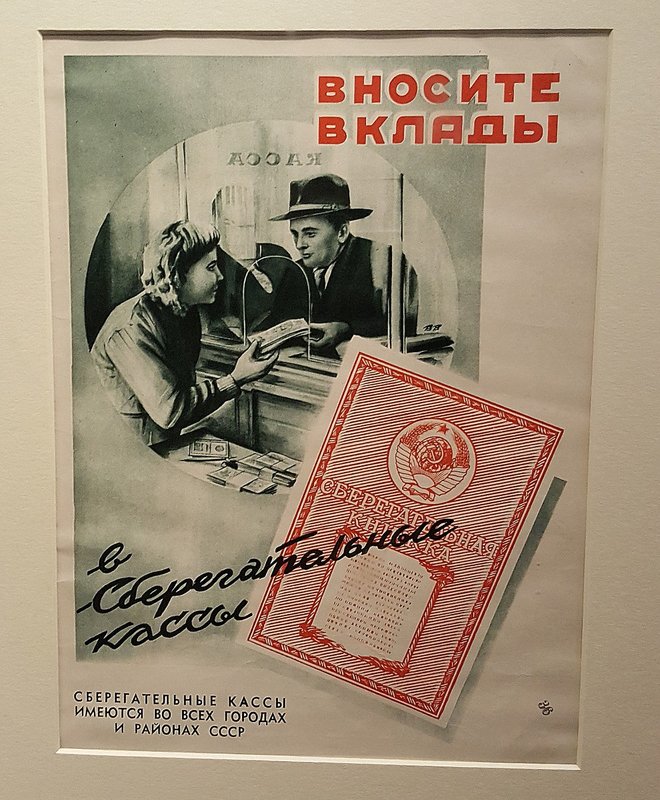 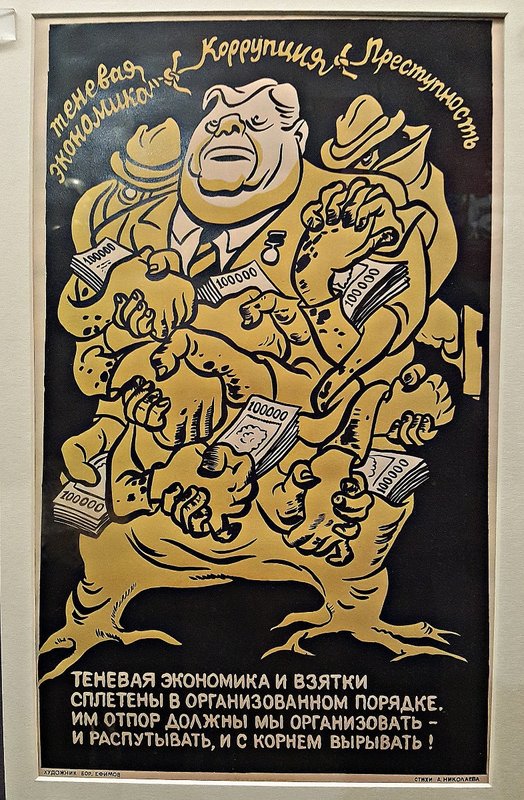 Small in size but very varied in appearance, the ‘stars’ of the show are the banknotes. One exhibit is a collage of banknotes from a wide range of socialist countries. Amongst these, I spotted Mao Tse Tung’s smiling face, the hirsute Friedrich Engels, Lenin, Ho Chi Minh, North Korea’s Kim Il Sung, and Albania’s mediaeval hero George Kastrioti Skanderbeg. Near these, there is an aluminium coin minted in East Germany (the ‘DDR’).

Individual banknotes from former Peoples’ Republics are also on display, grouped together to illustrate various themes illustrated on them. Industrial development was very important to those who ruled the people. 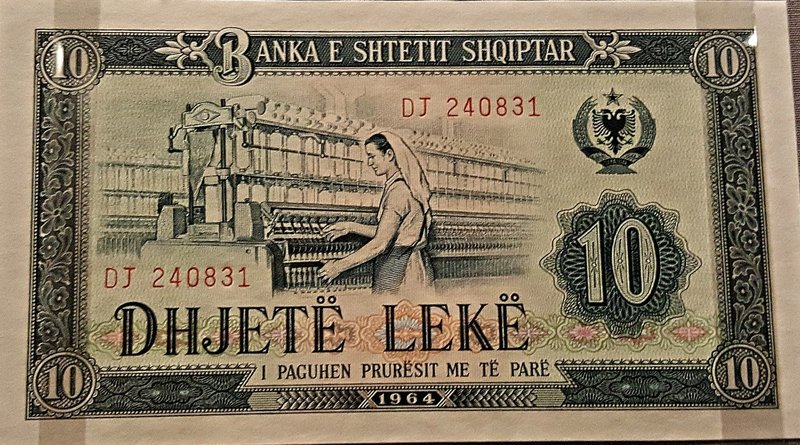 A 25 Lei note issued by the Romanian State Bank is illustrated with a view of chimneys belching smoke and tall buildings – a vision of a modern hell. A 10 Mark note from the DDR shows a tidy modern factory in a pleasant wooded hilly setting. The factory depicted was that of the East German branch of the Carl Zeiss optical firm in Jena. The State Bank of Albania issued a 10 Lek note in 1964, which shows a female worker operating a huge textile spinning machine. I wondered whether this was one of the machines in the (now obsolete) vast Chinese-built textile factory on the edge of Berat. 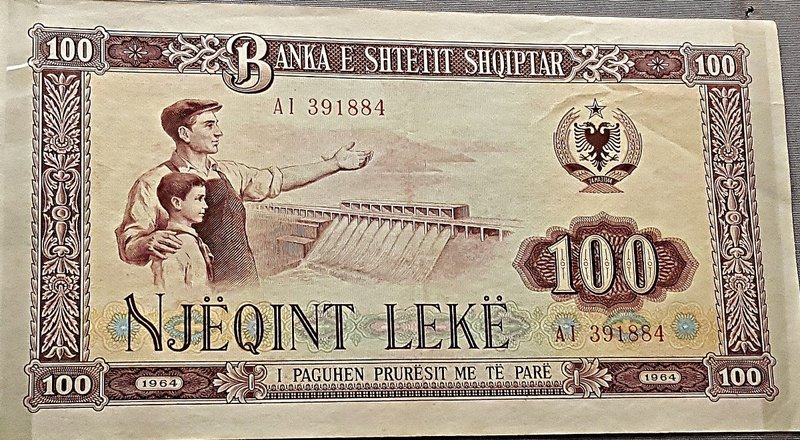 Albanian 100 Lek note with a dam 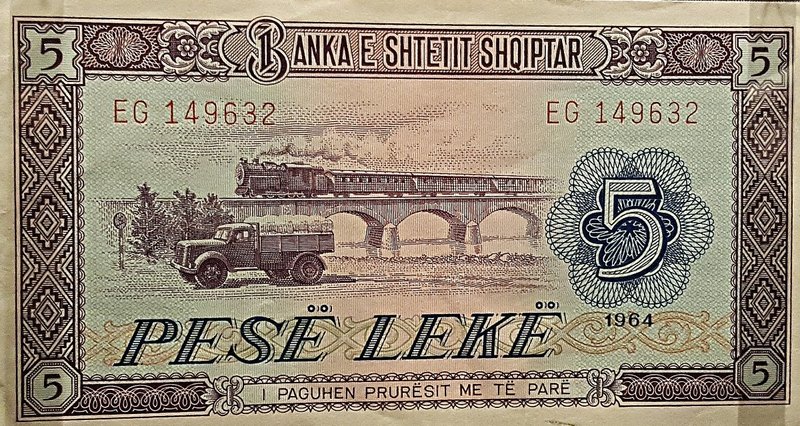 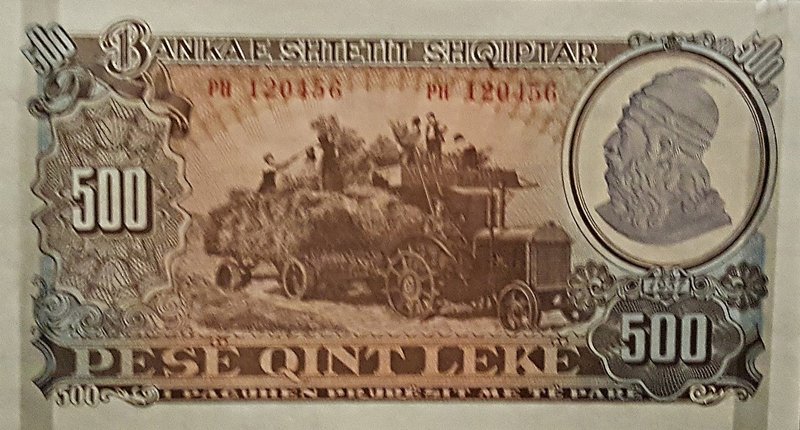 Another note issued in Albania in 1964 shows a man in overalls with his right hand on the right shoulder of a young boy. The man’s left hand is extended towards a hydroelectric dam in the background. This 100 Lek note was displayed close to a 5 Lek note, which shows a fully loaded lorry speeding from right to left. Behind it a steam engine is pulling a passenger train over a viaduct, again from right to left. Of all the Albanian notes on show, the 500 Lek note is really fascinating. It is illustrated with farm workers operating a truly archaic-looking motorised harvesting machine. Given that the Communists only assumed power in 1944, this machine looks like it was built several decades earlier. This high value banknote also bears Skanderbeg’s head in profile.

Albania’s neighbour, the former Yugoslavia, also produced nicely illustrated banknotes, often bearing a portrait of Josip Broz Tito. Two notes, which are exhibited, have an industrial theme. One shows a grinning miner, and the other shows workers doing maintenance on a railway steam engine. 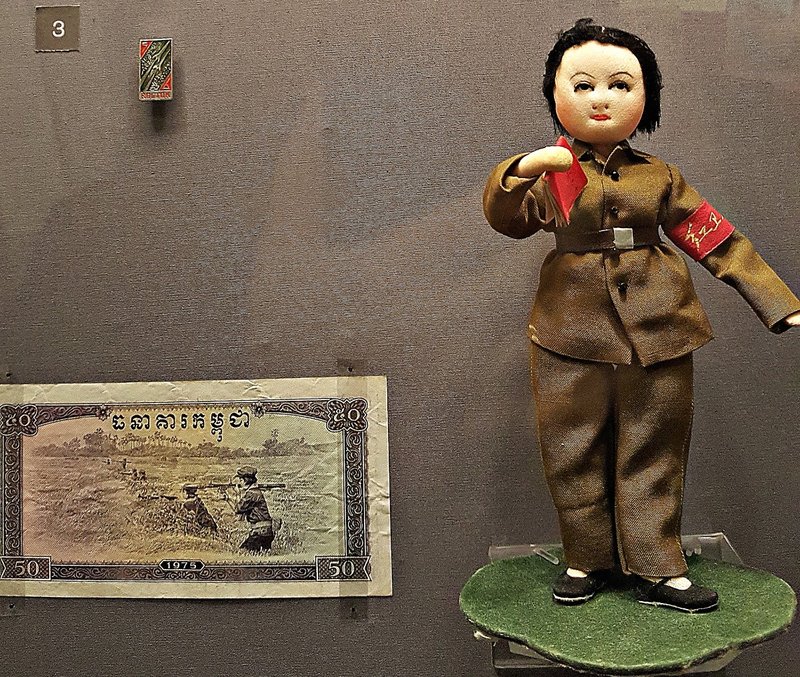 Cambodian note with bazookas and a Chinese doll 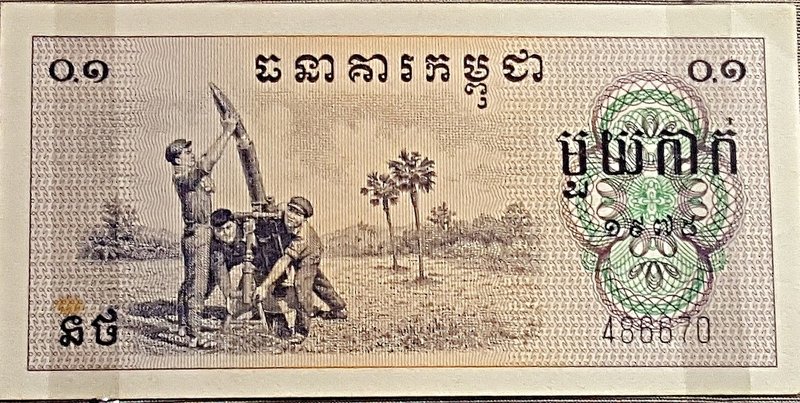 Cambodian note with a bazooka

Many, if not all, of the Peoples’ regimes achieved power with a ‘heroic struggle’. Aspects of the struggles make fine illustrations on some of the exhibited banknotes. A Cambodian note dated 1975 shows a field in which a several people are firing shoulder-borne bazookas. 1975 was the year when Pol Pot and his Khmer Rouge began their genocidal attack on the people of Cambodia. Next to this note, there is a toy doll in a khaki uniform, holding a little red book in her raised right hand. No doubt, this was a copy of Mao’s famous ‘Little Red Book’. Another Cambodian note depicts three men in peaked caps loading a shell into an articulated cannon or bazooka.

A note from Cuba worth 1 Peso shows a glorious scene. Fidel Castro and Che Guevara, along with several other men, stand on a tank entering Havana in 1959. The tank, which is moving from left to right, is surrounded by men wearing wide-brimmed hats. In the background, there are high-rise buildings, some of them draped with the new republic’s flag. 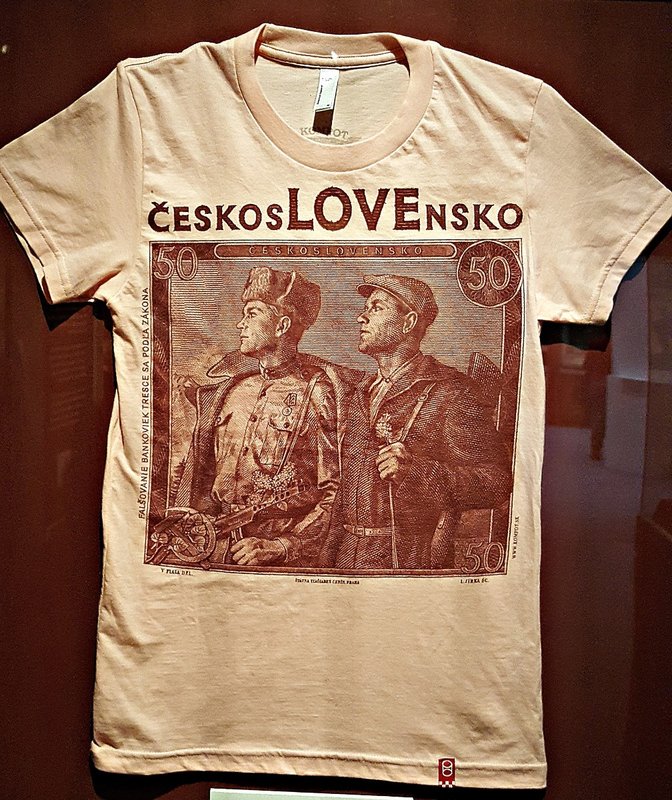 Many of the People’s Republics, especially those in Europe, came to an end soon after the dismantling of the Berlin Wall in 1989, Albania’s being one of the last. In Europe, there is still nostalgia for the ‘good old days’ of Communism. The wonderful German film “Goodbye Lenin” (made in 2003) is a fine example of this. Recently, when in Wrocław (Poland) I visited a restaurant, The Konspira, that specialised in exhibiting reminders of Poland’s decades under Soviet-dominated Communist rule. It includes a small room decorated entirely with furnishings that were available in the Communist years. At the exhibition, there is a contemporary tee-shirt from the Czech Republic decorated with an enlarged print of an old Czechoslovak note showing a soldier with a Russian hat bearing a machine gun. He is standing next to a workman in a peaked cap carrying a rifle over his shoulder. 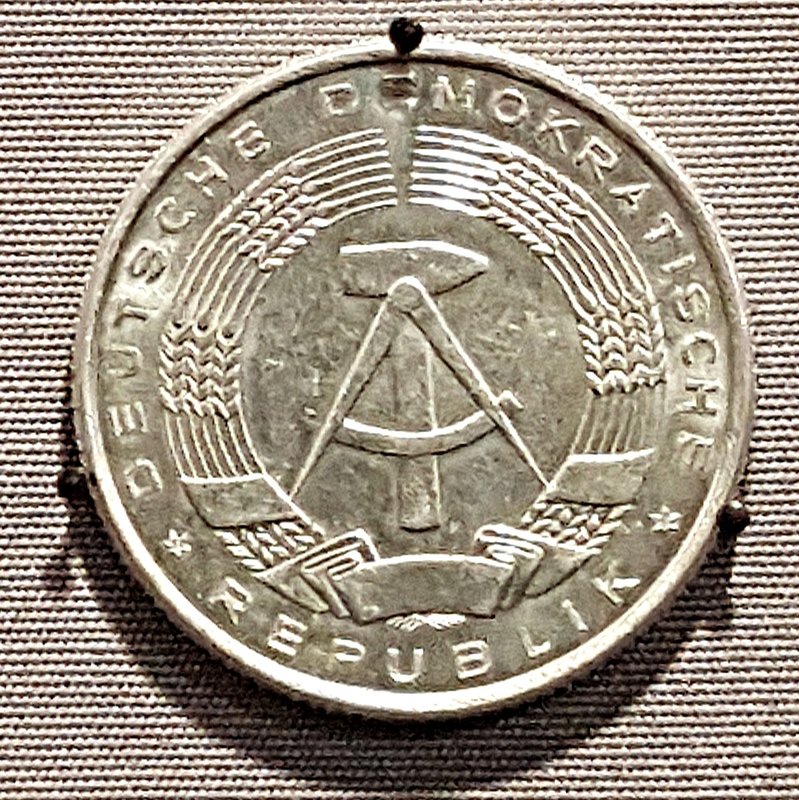 Aluminium coin from the DDR

I hope that this short account captures some of the ‘flavour’ of the exhibits at this small exhibition. It amazed me how much history is preserved in the banknotes, which were once in everyday use. The posters on display as well as the banknotes provided a superb display of that (for me) alluring style of art known as ‘social-realism’. 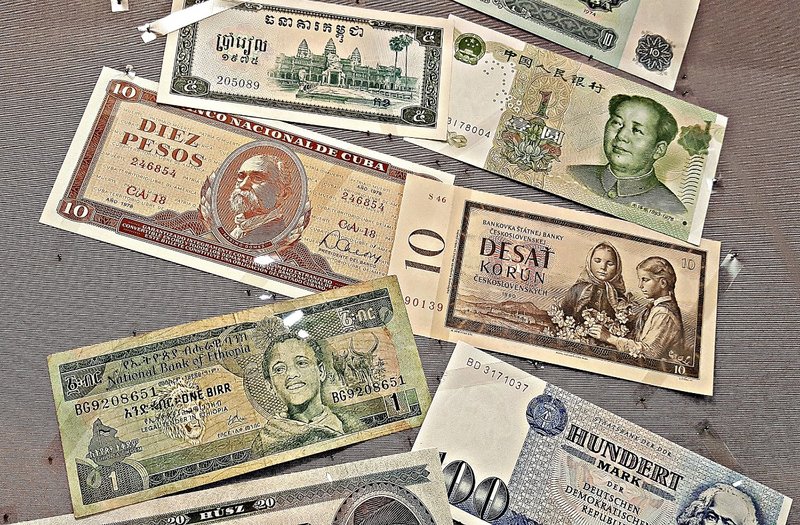 Finally, I must include a joke that was once current in the former USSR, which relates to the money on display, which was often almost valueless outside the country that issued it:
“We pretend to work, and they pretend to pay us!” 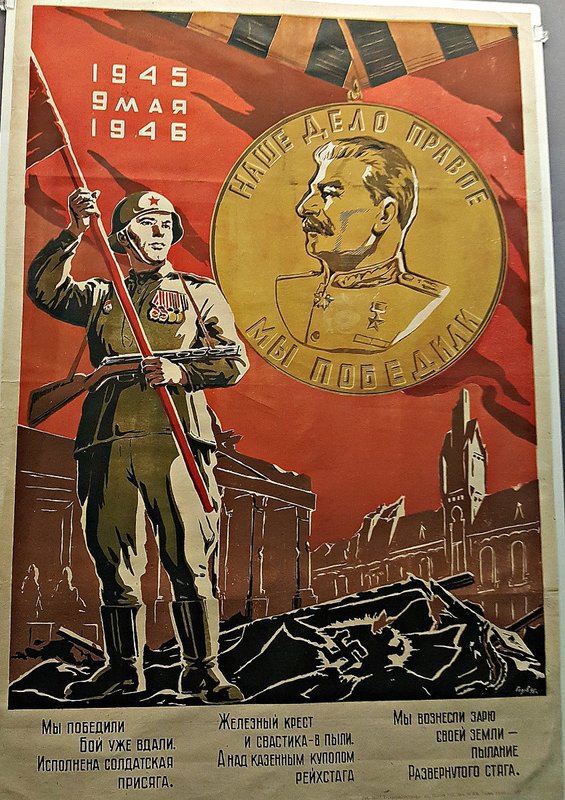