Views from high above London

Since time immemorial, a good view of London could be obtained by climbing up to the top of what is now known as Parliament Hill. Of course, many centuries ago there would have been little or nothing of what is now called London to be seen. As the city developed, various constructions have gone up, whose summits provide good vistas of London from above. 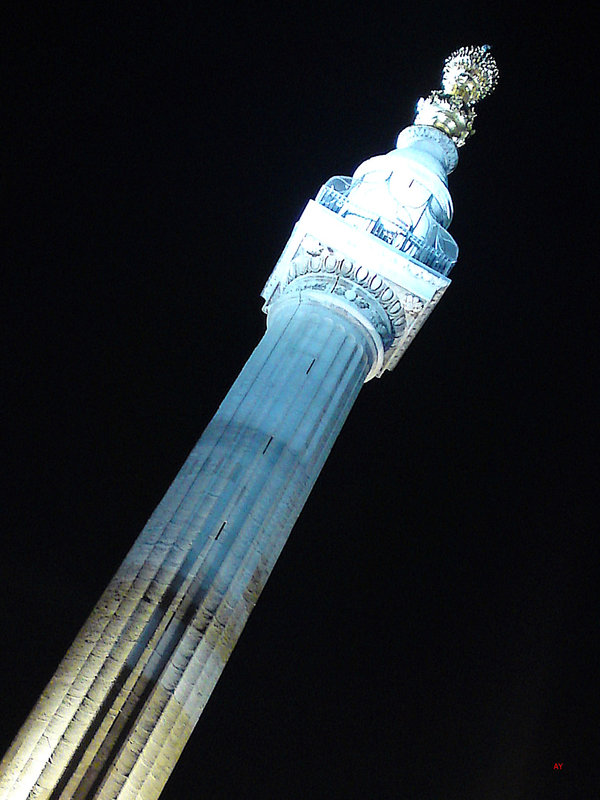 The Monument by night, London

In 1671, the Monument to the Fire of London was constructed. For a small fee (now it is not so small!), the visitor could ascend the spiral staircase, and, on reaching the top, gain a great view of the city beneath. Now, it is still fun to ascend the Monument, but the views have bee wrecked by the tall buildings constructed all around it. At around that time, Christopher Wren's St Pauls Cathedral was built. Those with stamina to ascendt to the top of its dome would have been able to enjoy a great view. I have done this once, but cannot recall the view, only the awful climb! 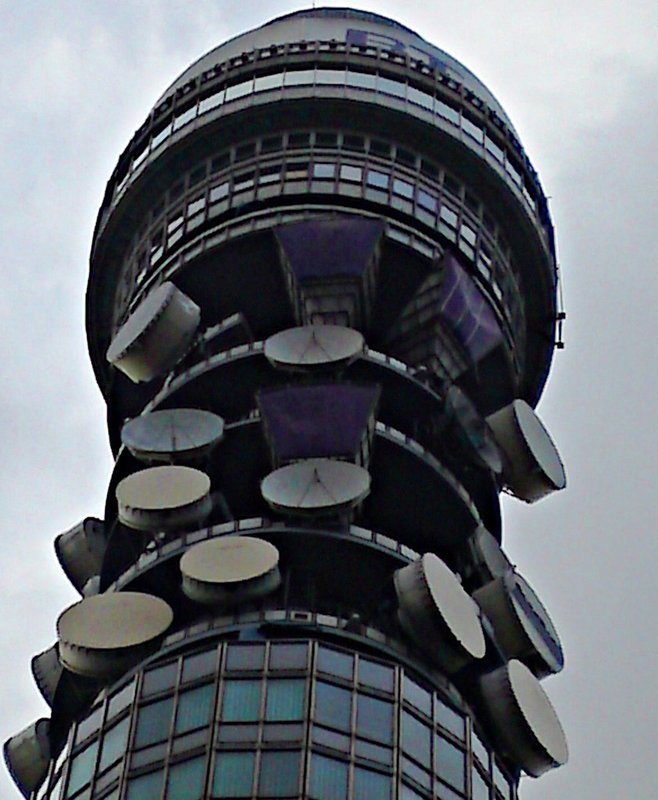 In 1965, when I was just entering secondary school, the construction of the Post Office Tower was completed. For a few years after that, it was possible to take a lift to the viewing platform just beneath the rotating restaurant. If you were feeling particularly well-off, you could enjoy a meal in the dizzying roatating restaurant. Terrorism related to troubles in Northern Ireland were partly responsible for closing the Tower to the public. 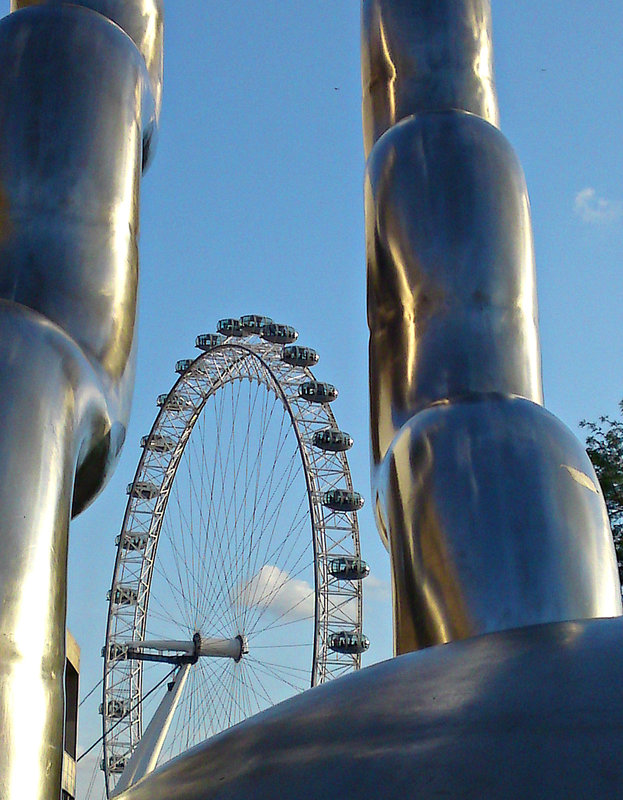 London Eye viewed through a sculpture on the South Bank 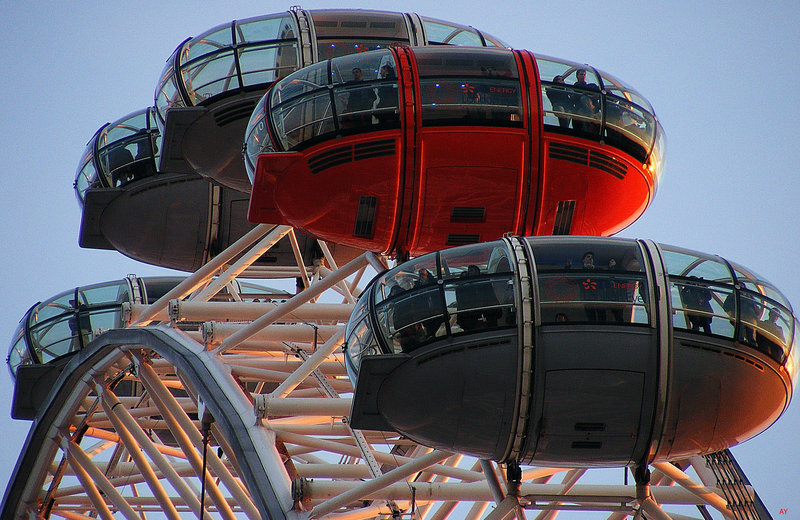 Passenger pods on the London Eye

Coinciding with the arrival of the Millennium in 2000, was the opening of the giant Ferris Wheel called the 'London Eye'. The views from this are, without doubt, fantastic, and worth paying for at least once. 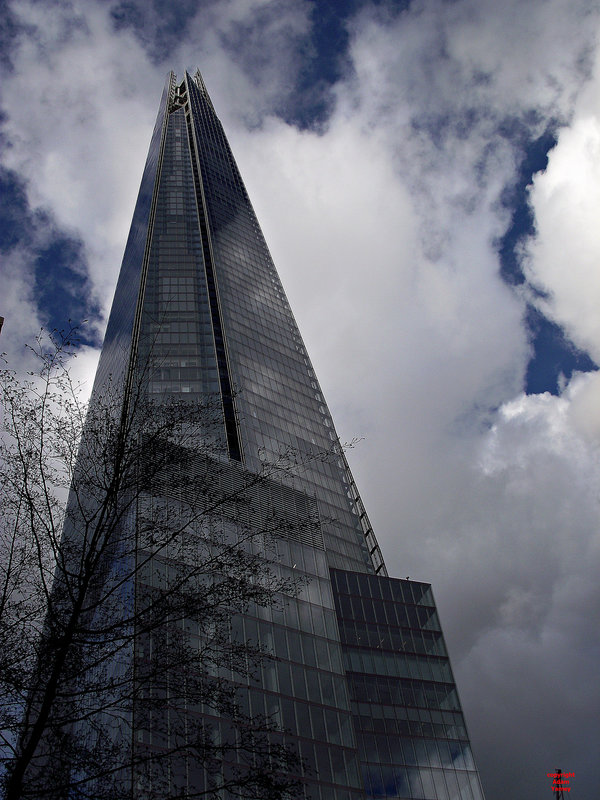 In about 2012, the so- called Shard building near Tower Bridge opened. I have heard that the view from its summit is amazing, as it should be being so high above the ground. 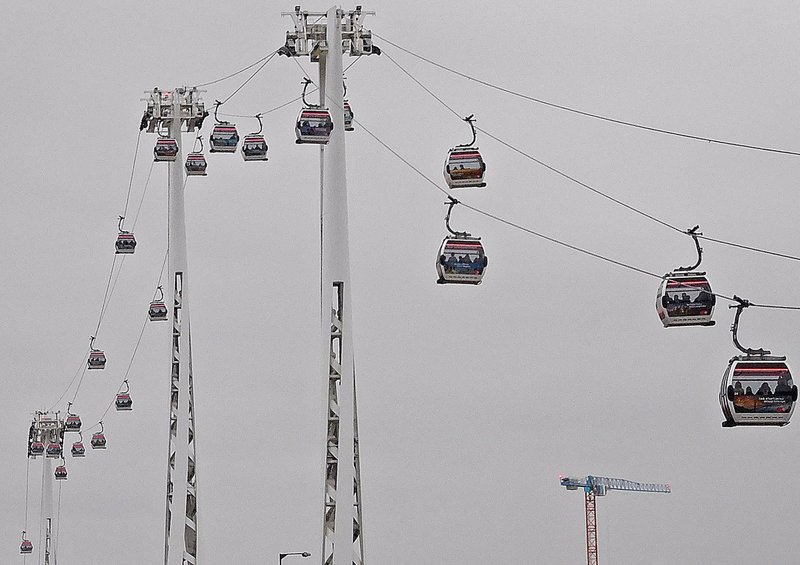 Coinciding with the Olympic Games in London, the Emirates Air Line was opened. This cable car service, which connects North Greenwich (near the O2 - Millennium Dome) with Royal Victoria Dock across the Thames. provides the Emirates Airline Company with excellent publicity as well as providing a much needed additional crossing of the river. In addition, it is a wonderful tourist attraction, which unlike The Shard, is easily affordable. 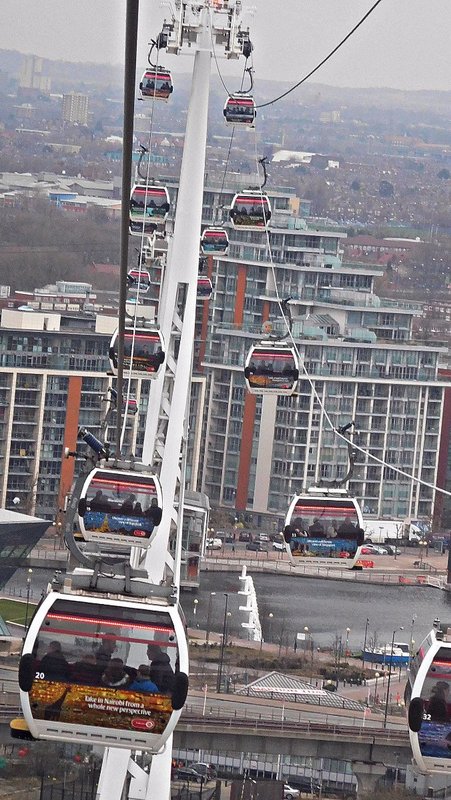 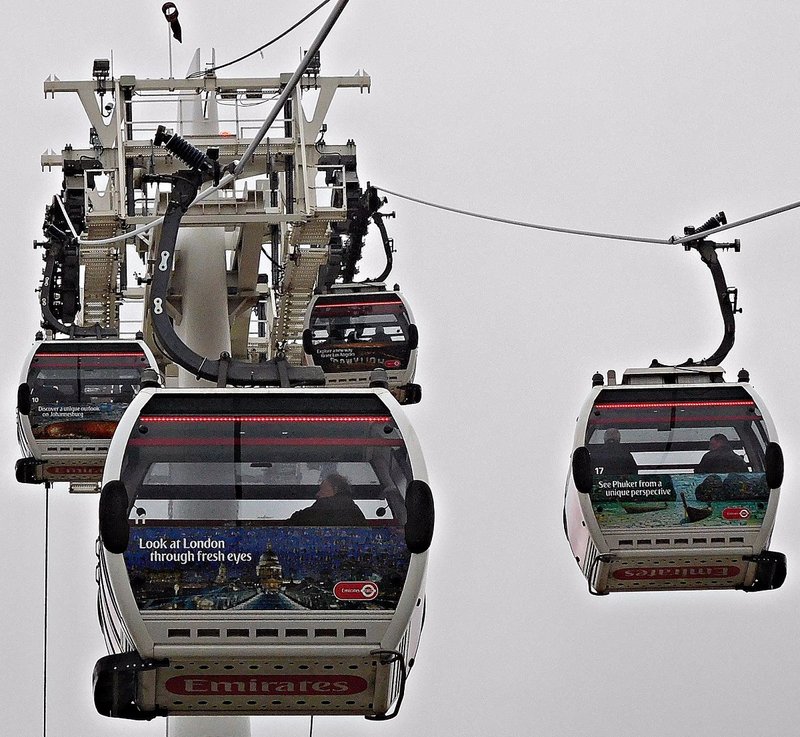 
I have travelled on the cable car three times, always in bad weather. Nevertheless, the views from its small cabins are fabulous. Looking down, one gets great views of the Dockland developments and an unusual view from above the Millennium Dome. Looking out in less of a downward direction, there ar magnificent vistas of the myriads of other cabbins travelling in both directions. 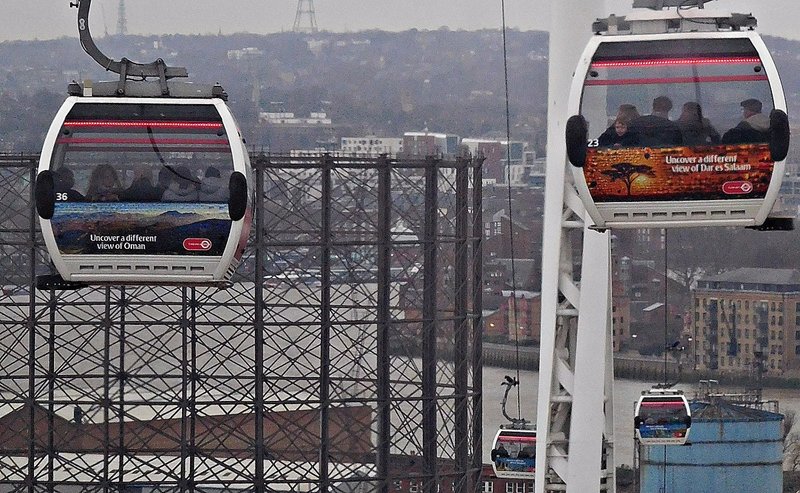 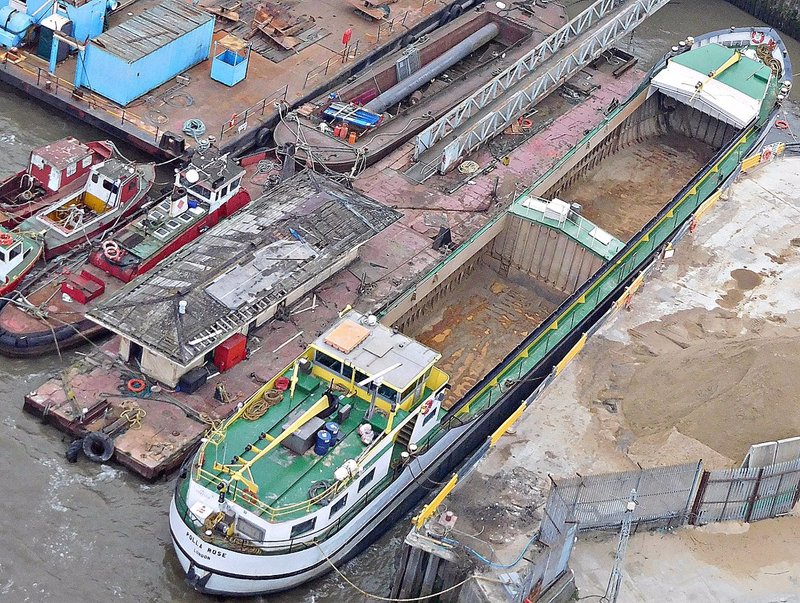 Traversing the river by means of this cable car system takes less than 10 minutes when it is not peak hour, but speeds up during rush hour. 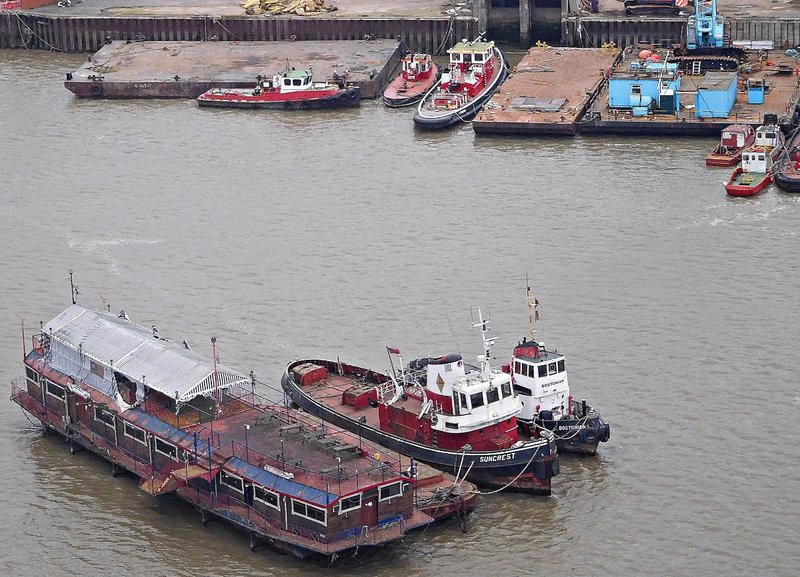 I suppose that those with a fear of heights should avoid this attraction, but judging by what fellow passengers, who claim to be scared of heights, say this is quite manageable. It is an exciting, worthwhile way to see London from the top! 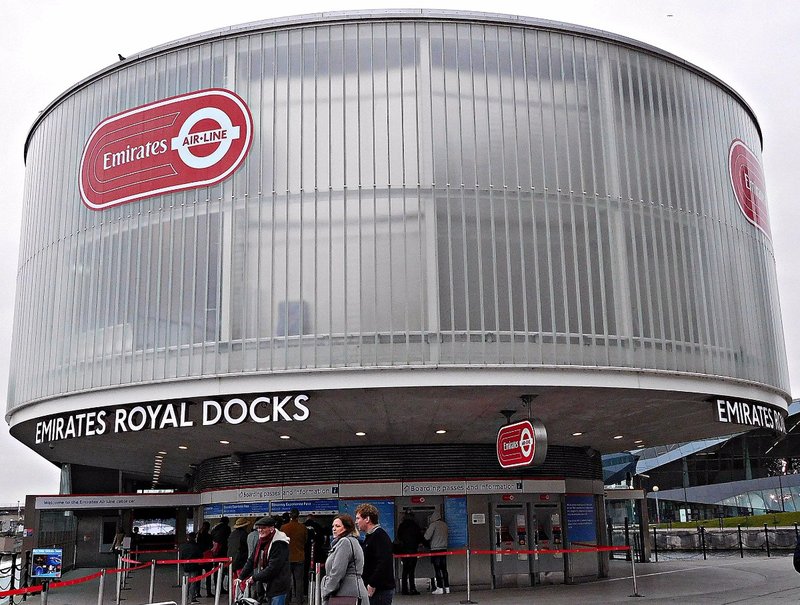 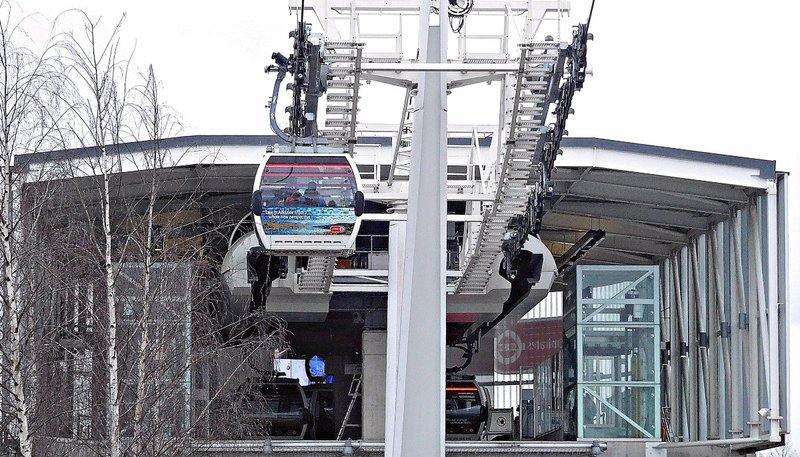 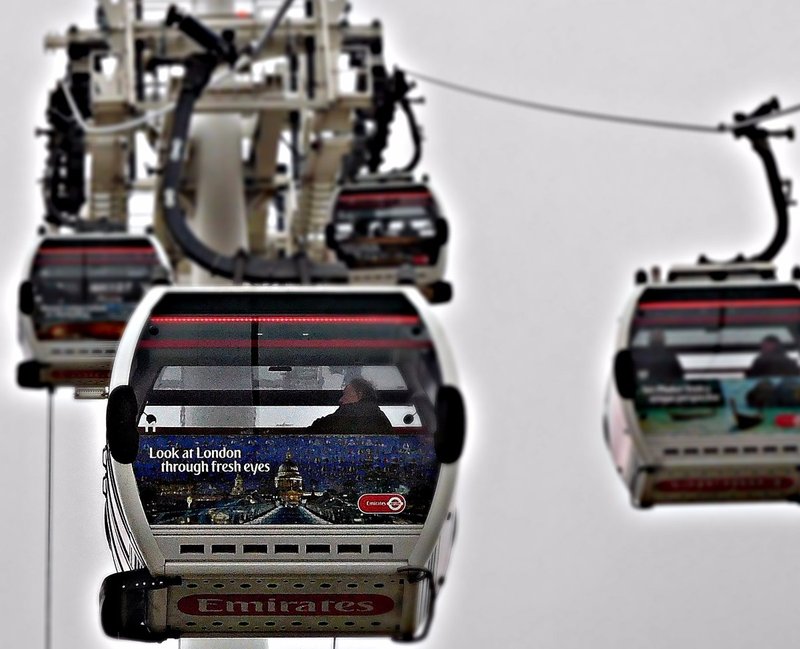 The Emirates Airways gives a great view over the eastern part of London. The London Eye is better for overviewing the West , North, and South. Together, these two attractions provide a great way of seeing London without needing wings! 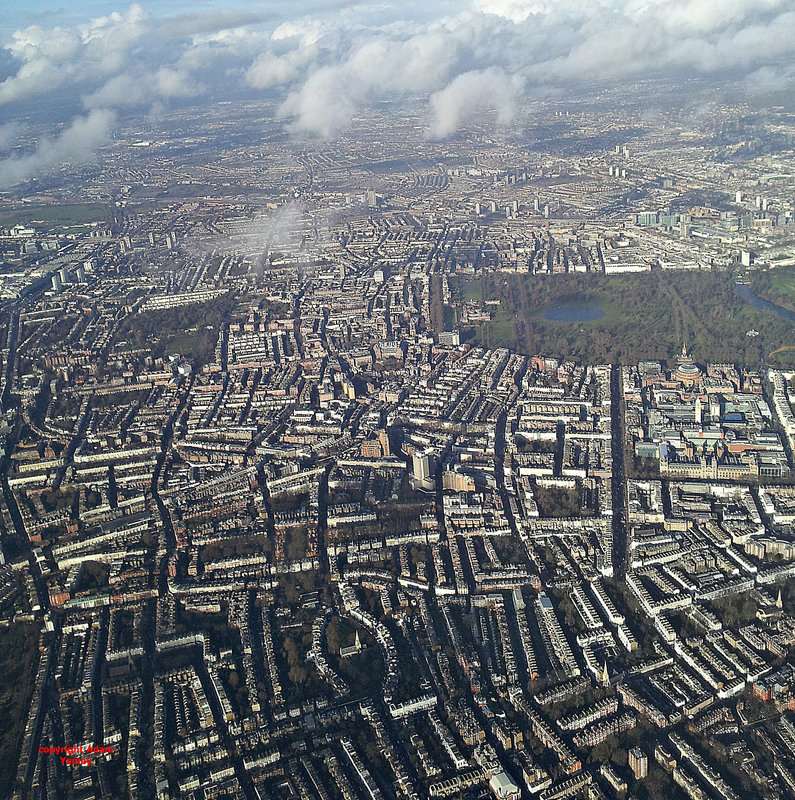 We went up the Shard recently (got a good Groupon deal!) and it's definitely worth doing if you get the chance. Haven't got round to the cable car yet though - must do so! Good idea for a blog :-)

Must try the Shard sometime.