IN THE FOOTSTEPS OF ROMANS

A short historic street in the City of London recalls one of the great roads that the Romans used when they occupied Britain. 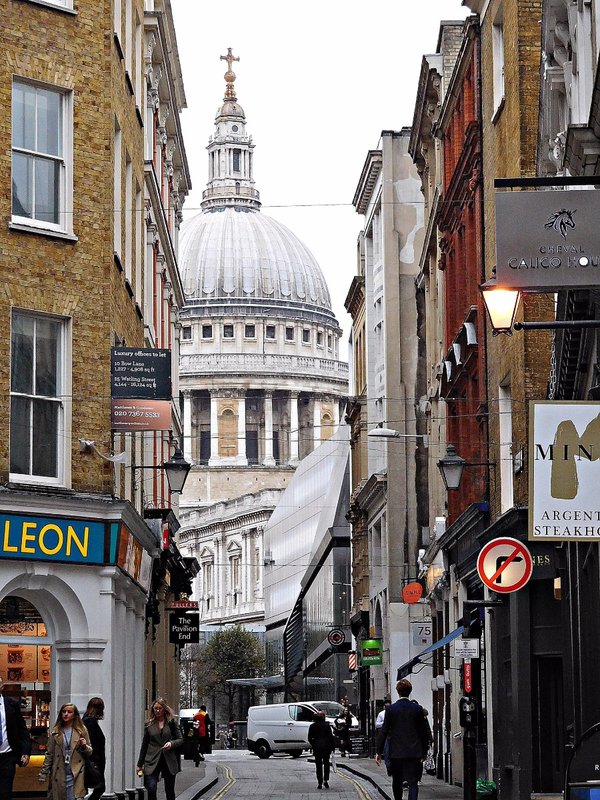 The existence of Watling Street predates its naming. Before the Romans arrived in Britain, the road existed as a track between modern Canterbury and St Albans. It acquired its name after the Roman occupation from the Old English ‘Wæcelinga Stræt’, which means the road of the Waeclingas (an Anglo-Saxon ‘tribe’ that lived in the St Alban’s area after the Romans left Britain in the 5th century AD). This was after the Romans had established it as a major road, improved, and lengthened it.

It is accepted that in Roman times Watling Street ran from places in East Kent (e.g. Richborough, Reculver, Dover, and Lympne) to modern-day Southwark, and then across the Roman London Bridge, through London (‘Londinium’), and onwards via St Albans (‘Verulamium’) to Wroxeter (‘Viroconium’) in Shropshire. Its detailed route through London is uncertain. Archaeological evidence has determined that the Roman Watling Street went through the north of Southwark to the southern end of the Roman London Bridge (see: “London City of the Romans” by R Merrifield, publ. 1983). North of the Thames, the road’s course through London is less well-defined. It is highly likely that the road followed the course taken by today’s Edgware Road (the A5). There is little evidence to define the road’s route between London Bridge and Marble Arch, where the Edgware Road begins.

After the Great Fire of London (1666), a portion of the paved Roman Watling Street was discovered whilst the Church of St Mary-le-Bow was being rebuilt in the early 1670s. Aga’s 1561 map of London (see: http://www.british-history.ac.uk/no-series/london-map-agas/1561) shows a stretch of road named ‘Watling Streat’ running east to west just south of ‘Bowe church’. John Rocque’s 1746 map (see: https://www.locatinglondon.org/) marks the same road, but in greater detail. It ran from Queen Street (which did not exist in 1561) westwards towards St Paul’s Cathedral churchyard. This short stretch of what might be part of the course of Roman Watling Street exists today, and is well-worth exploring.

The present-day Watling Street begins at the point where Queen Street meets Queen Victoria Street, a few yards south-west of the (3rd or 4th century AD) remains of the Roman Temple of Mithras. These used to be visible from the pavement of Queen Victoria Street but now (October 2017) they are hidden below the new Bloomberg Building. Eventually, they will be accessible to the public again. 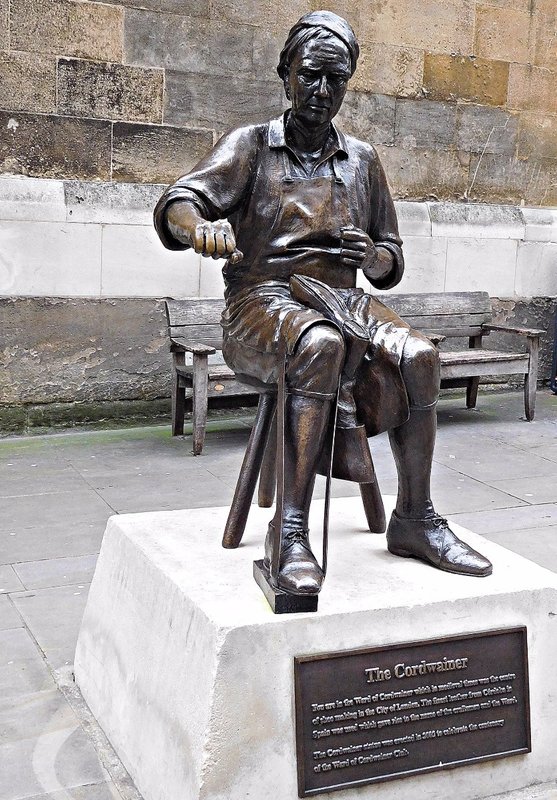 Heading west along Watling Street from Queen Street, there is a sculpture of a seated cordwainer (a shoemaker as opposed to a cobbler, who repairs shoes) at work. The sculpture was made in 2002 by Alma Boyes, who teaches at the University of Brighton. It stands in Cordwainer Ward, an area that was a centre of shoe-making in the mediaeval City of London. The word ‘cordwainer’ is derived from the Spanish city of Cordoba, where some of the finest leather was produced in the Middle Ages.

Across the road, there is a plaque commemorating the fact that the building to which it is attached is on the site of the headquarters of the London Salvage Corps between 1907 and 1960. This organization, whose job it was to reduce the loss and damage following fires, was founded in 1865 by the insurance ‘industry’. In 1984, the Corps was disbanded. Then, it became incorporated into the London Fire Brigade. 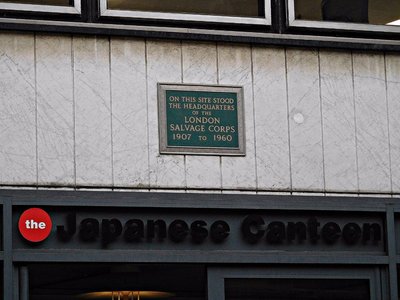 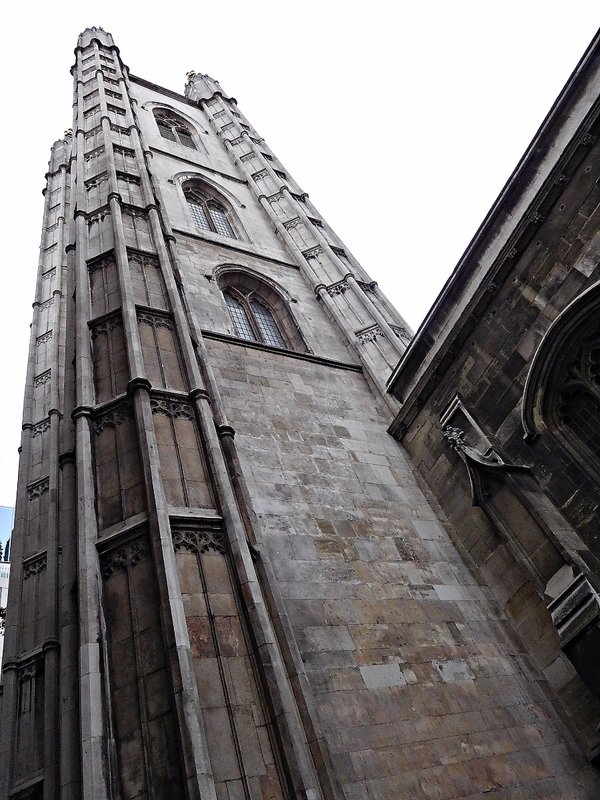 Bow Lane leads south from Watling Street to St Mary Aldermary church, a lovely gothic building with a tall tower, also adorned with gothic decoration. There has been a church on this spot since before 1080. It was rebuilt in 1511, but not completed until about 1629. The lower bit of the tower of the present church is a part of the 1511 church, but the rest was rebuilt in 1682 after The Great Fire to the designs of Christopher Wren (1632-1723). 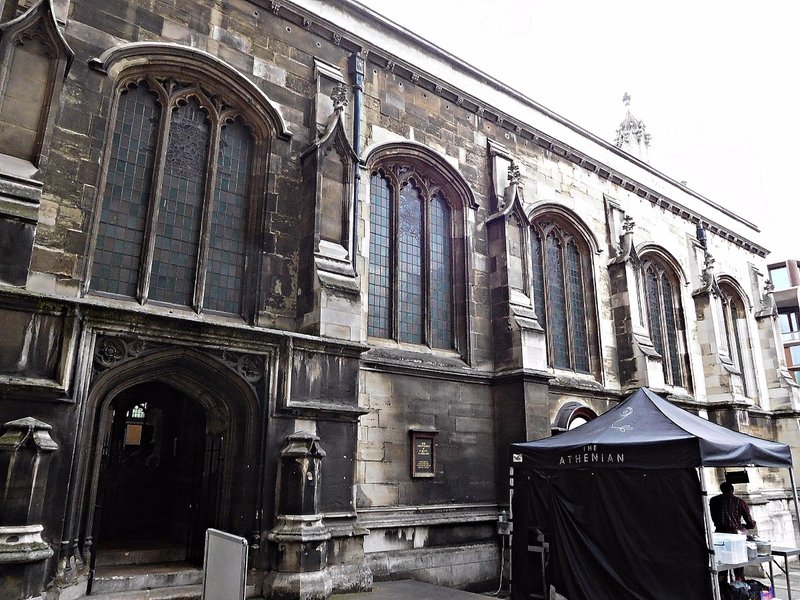 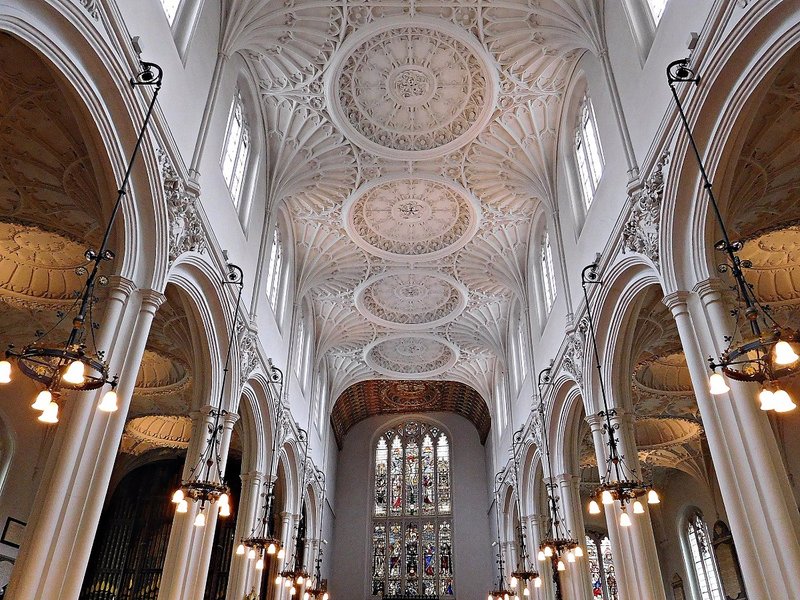 In Kenneth Clarke’s book “Gothic Revival An Essay in the History of Taste” (first publ. 1928), he argued that maybe the taste for gothic never actually died in Great Britain. What we describe as ‘gothic revival’ or ‘neo-gothic’ should be regarded as part of a continuum, which began with early gothic in the mediaeval era. I feel that Wren’s St Mary Aldermary is a good example of this. Built when many people would say that the era of ‘true’ gothic was over, this church is a perfect example of all that is pleasing about early gothic. The most impressive feature of the church’s interior is its delicate fan vaulting, both above the nave and its two parallel side aisles. Unlike earlier gothic churches (e.g. Kings College Chapel in Cambridge), this is not stonework but plasterwork, and therefore has no structural function. The architectural historian Nikolaus Pevsner wondered whether by using this fan vaulting, Wren was trying to imitate the vaulting that had been present in the 1629 church, which was built during a time when fan vaulting was still being created in some buildings. 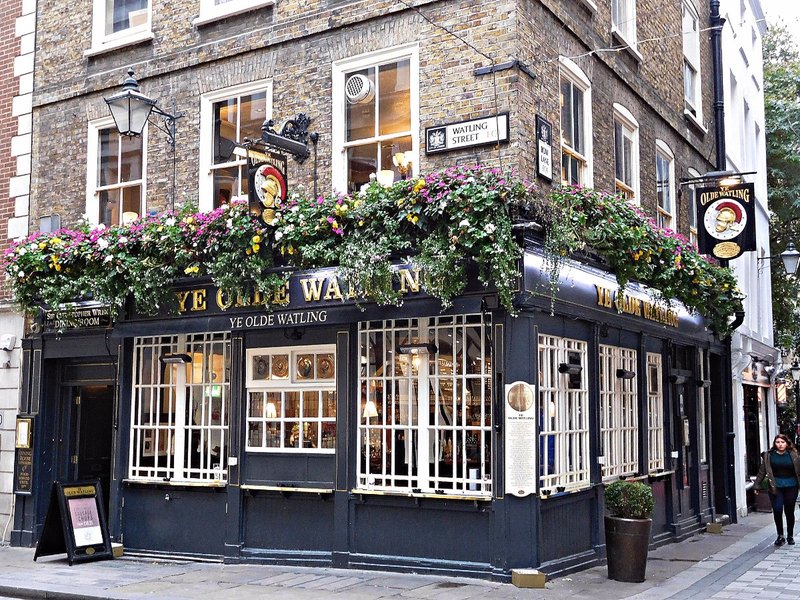 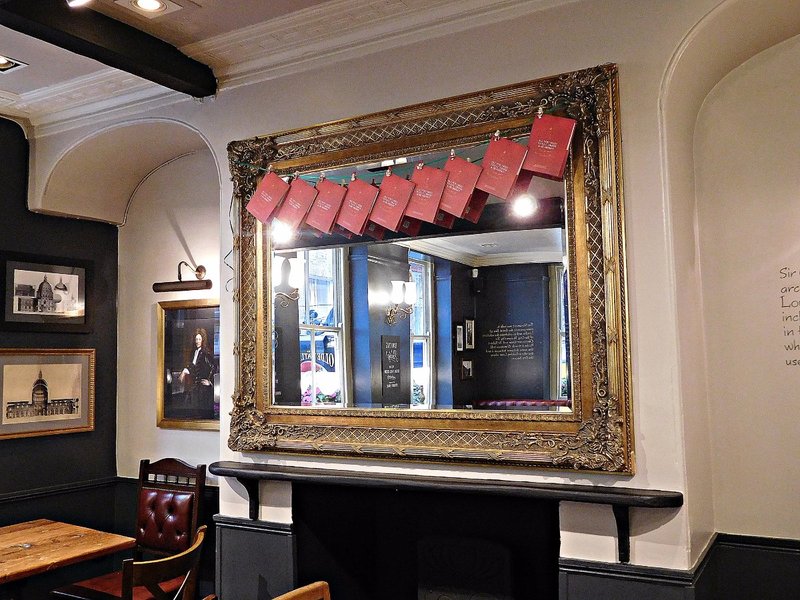 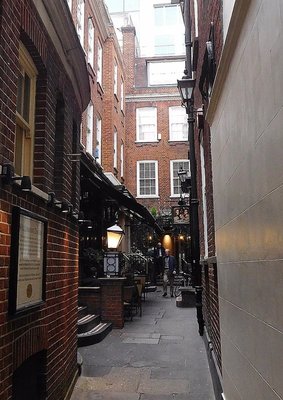 Returning north along Bow Lane, we reach a pub, Ye Olde Watling, on the corner of Watling Street. Built in 1668 to replace its predecessor, which was burnt down in the Great Fire, it is said that Christopher Wren occupied rooms above the pub while he was designing the new St Pauls Cathedral. A room on the first floor, now used as a dining room, is said to be the room Wren used to prepare his architectural plans and drawings. However, the pub was rebuilt in 1901, and then again in 1947 after bomb damage during the Blitz. So, how much remains of what Wren used is questionable. Having said this, the study on the first floor has an authentic feeling if you use a little imagination. 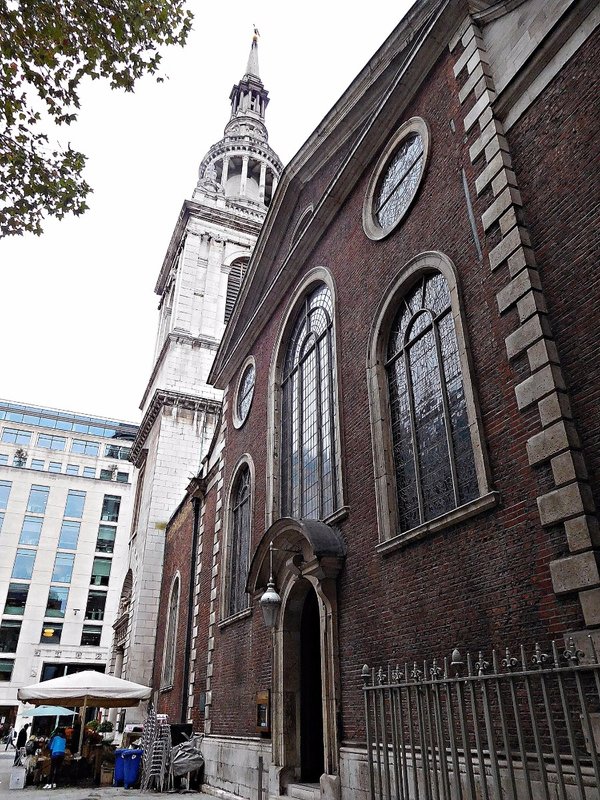 Bow Lane continues north, passing some narrow alleys such as Groveland Court, to reach the eastern end of Bow Churchyard. The main part of this yard opens out onto Cheapside. The church of St Mary-le-Bow was founded in about 1080 as the London headquarters of the archbishops of Canterbury (see: http://www.stmarylebow.co.uk/history/4535373215). It was the bells of this church that the young Dick Whittington, who was to be thrice Mayor of London, heard as he rested at Highgate. Legend has it that he thought that their chimes were telling him to return to London. To be a cockney Londoner, one is supposed to have been born within hearing of the bells of St Mary-le-Bow (rather than Bow Church, which is in the East End). Long ago, these bells could be heard as far away as Southwark, and much of north and east London, but now with high ambient noise levels they can only be heard in the City of London and Shoreditch (see: “Daily Telegraph”, 26th June 2012), where few people are now born. 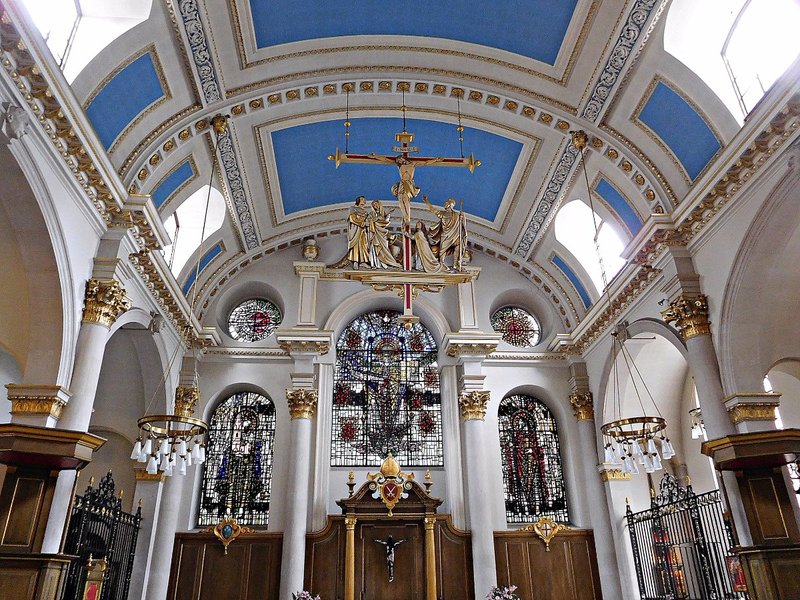 The mediaeval church was destroyed in the Great Fire, and was rebuilt to the designs of Christopher Wren between 1670 and ’80. Pevsner writes that the northern positioning of the church’s tower is because Wren built it on a Roman gravel roadway running from east to west (discovered eighteen feet below ground level while preparing the site for the new church), which made a solid foundation for it.

The church’s wide nave is covered by a barrel-vaulted ceiling supported by pillars with Corinthian capitals. Since Wren’s time, the church has undergone repeated renovations and restorations. 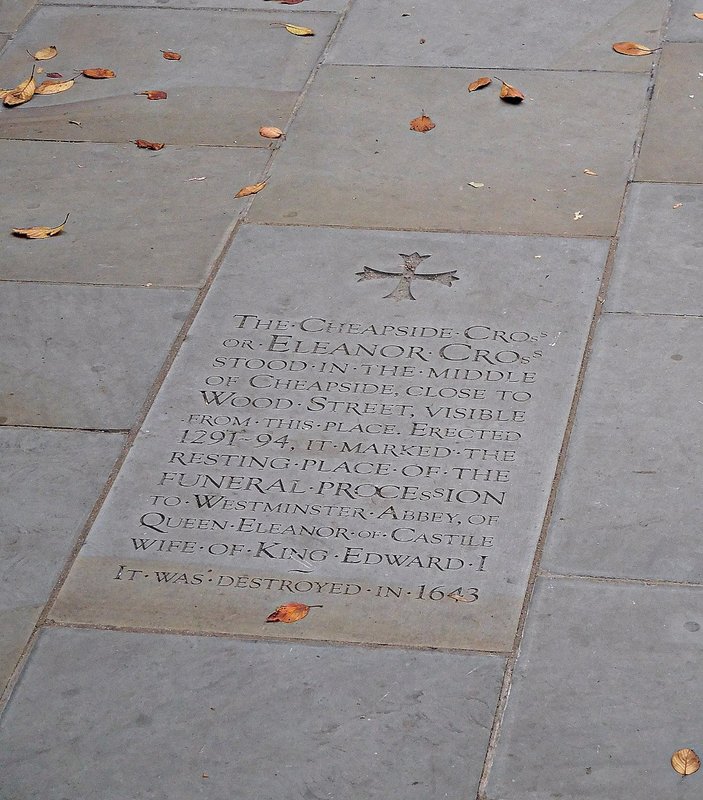 A paving stone with a carved inscription outside the western doorway of church’s tower records the former existence of an Eleanor Cross nearby on Cheapside. This cross was one of a series of such monuments marking the places where the corpse of Queen Eleanor of Castile, wife of King Edward I, rested on its way to Westminster Abbey in 1290. This cross was demolished in 1643 during the English Civil War (1642-51). 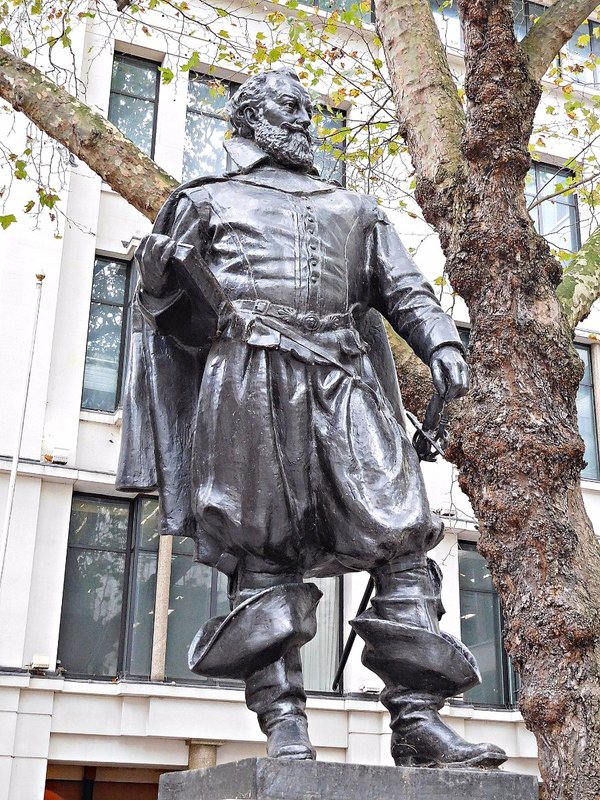 There is a statue in the churchyard. It depicts the cordwainer Captain John Smith (1580-1631), who was amongst the first settlers in Jamestown, Virginia (now in the USA). He set off from the docks at Blackwall in 1606. Wearing knee breeches and boots with very wide rims, the bearded figure stands with his right hand holding a book, and his left resting on the handle of his sheathed sword. The statue, cast in the USA and erected in 1960, was presented to the Corporation of London by Jamestown Foundation of the Commonwealth of Virginia (see: https://www.londonremembers.com/memorials/captain-john-smith). It is a copy of an earlier one originally sculpted in 1907 by William Couper (1853-1942), which stands in Jamestown. 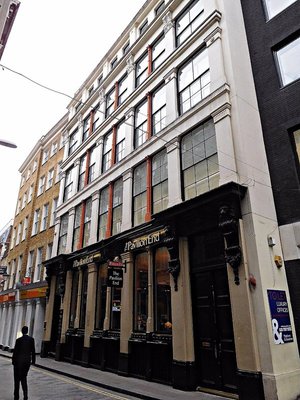 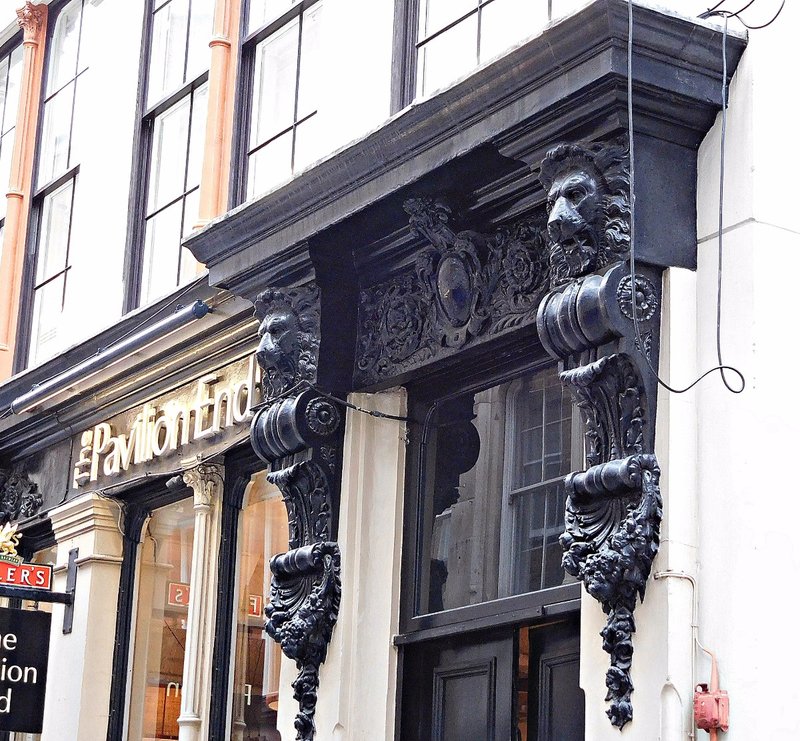 Returning to Watling Street, number 23 has a façade covered with short pilasters which separate the windows from each other. Its two entrances are adorned with lions’ heads, scrolls, floral festoons and crests. Its ground-floor now houses a cricket-themed pub. 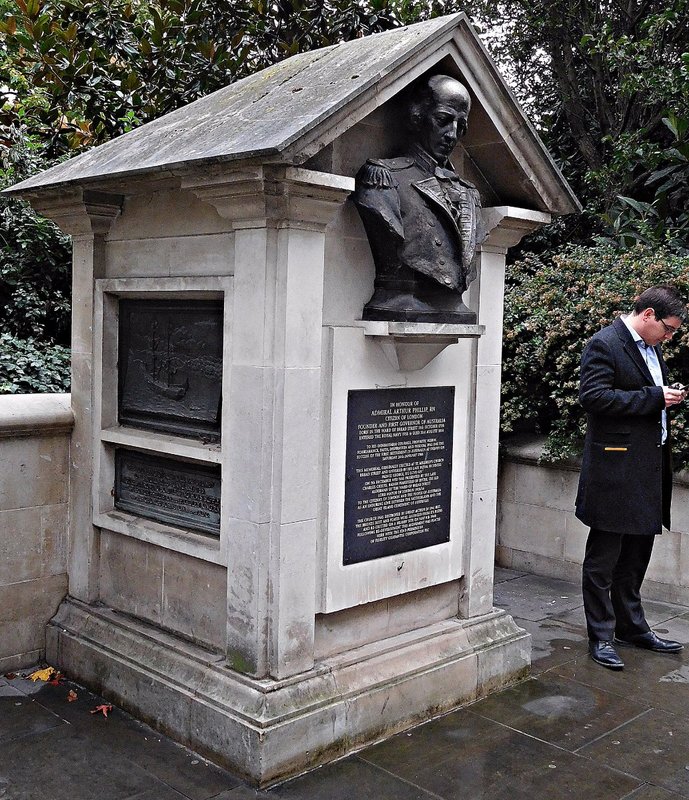 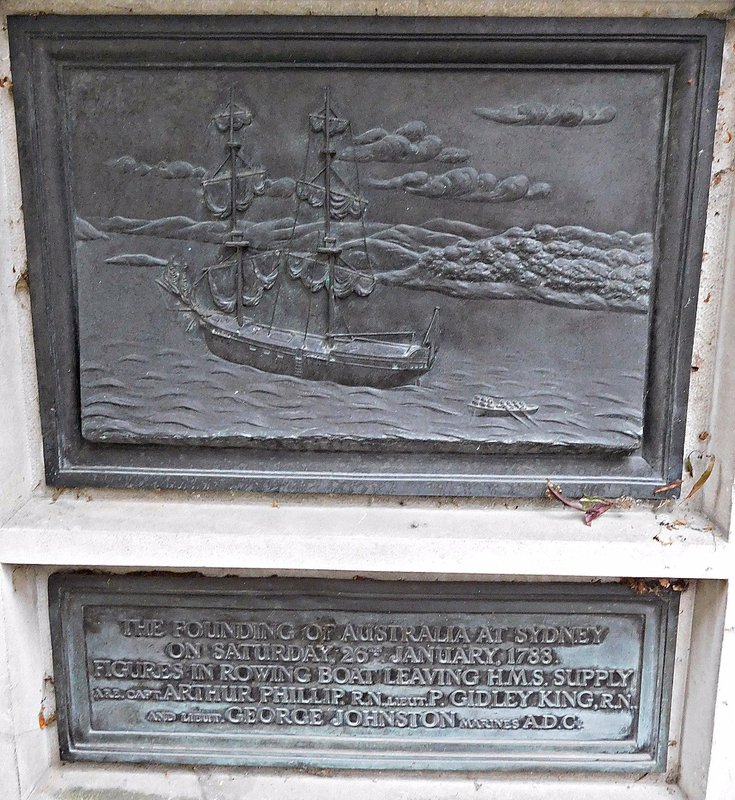 Near the western end of Watling Street there is a stone monument shaped like a small classical building. This celebrates Admiral Arthur Phillip, who was born in Cheapside in 1738. He died in Bath in 1814. In 1788, he established a penal colony in New South Wales (Australia), which was later to become the city of Sydney. The monument originally stood in the Church of St Mildreds, where it was placed in 1932. The church was destroyed by bombing in 1941, but the bust and the bronze commemorative plaques were salvaged, and then placed on a new monument near the present place in 1968. Recent redevelopments caused it to be moved to its present site. 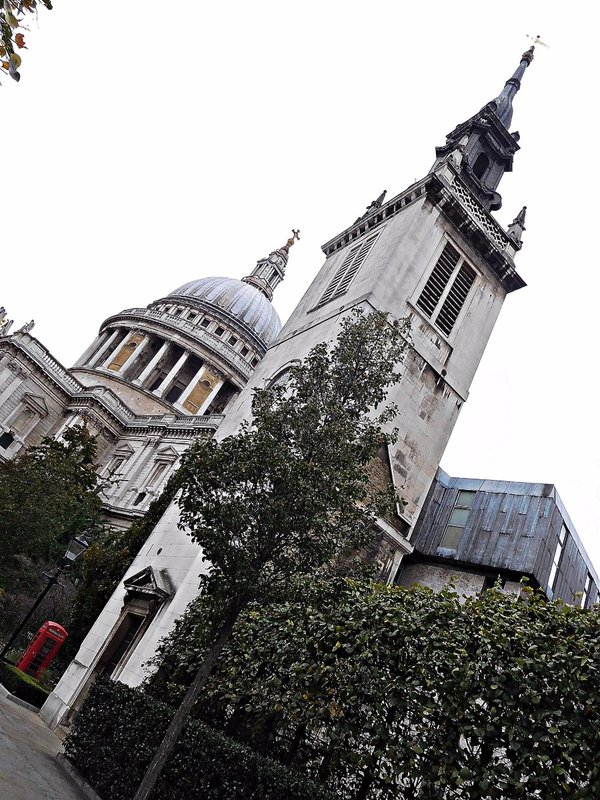 Between the Phillip monument and St Pauls Cathedral, there is an old church tower with an elaborate spire covered in lead. This is attached to a far newer building, a choir school designed by Paul Paget (1901-85). The tower is all that remains of St Augustine Church that was designed by Wren between 1680 and ’83. The spire was added later in 1695. 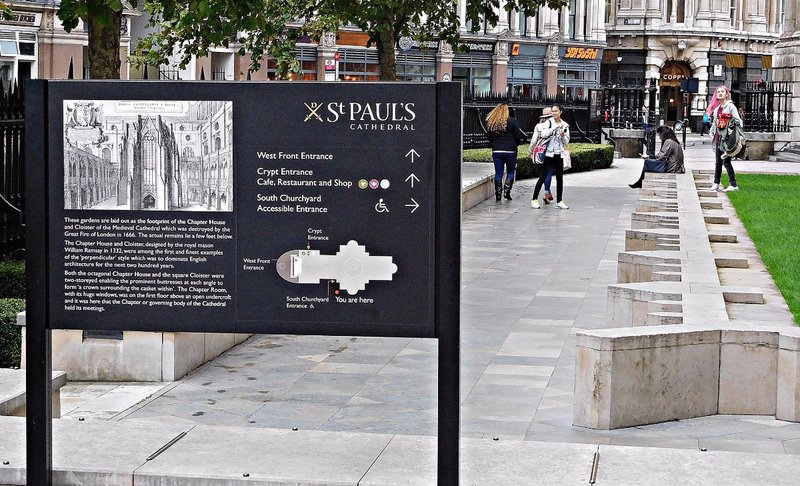 Watling Street ends here, but from Aga’s time up to WW2, it ended at the eastern end of St Paul’s Churchyard. Whether or not this Watling Street is part of the actual Roman Watling Street matters little, because it is close to, or actually where, it ran. Short as it is, it is full of interest, and, also, provides a nicely framed view of St Pauls Cathedral. 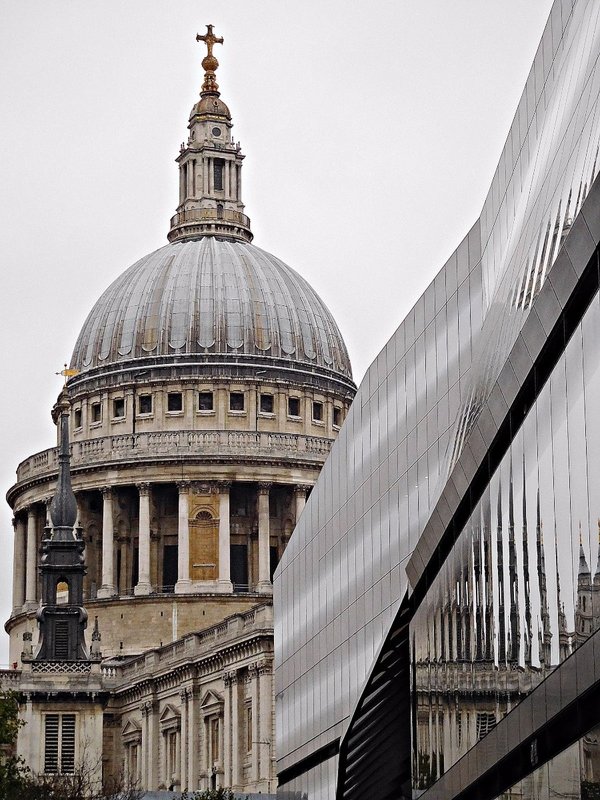 PS: Some of the traffic using the Watling Street route in Roman times and before London Bridge was built might have travelled through what is now the London area by the following approximate route (using modern place names): Elephant and Castle to a ford across the Thames between today’s Westminster and Lambeth Bridges. Interestingly, if one draws a straight line from Marble Arch to this point, it becomes a notional straight continuation of the Edgware Road.

As always I enjoyed my virtual walk with you. I have never been inside St Mary Aldermary and really must do so, as that ceiling looks stunning!

Amazing what you can find when you really examine your surroundings. Great blog.