London's Bell Street, off Edgware Road, has a surprising history and an fascinating present 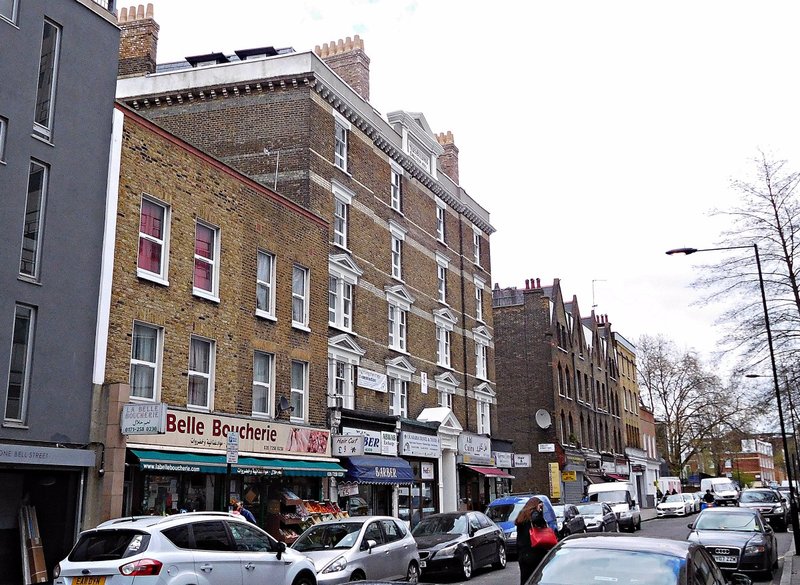 It is unlikely that I would have become familiar with Bell Street had it not been for the presence of the Lisson Grove Gallery, which is housed in two buildings along it. We were first attracted to the gallery when it was showing one of its many exhibitions of works by the sculptor Anish Kapoor (born 1954 in Bombay, India). Before describing why I enjoy visiting Bell Street, let me first describe some of its history and something that made it unique for a while during the mid-19th century, but no longer exists except as a fading memory.

Bell Street currently connects Edgware Road, the Roman ‘Watling Street’, with Lisson Grove. In former times, Bell Street was shorter, only running between Edgware Road and Lisson Street. It continued to Lisson Grove under other names. In 1930, it was continued as ‘Bendall Street’, and before that (on 1901 and 1820 maps) as ‘Great James Street’. Bendall Street became part of Bell Street sometime between 1929 and 1945 (see: http://www.maps.thehunthouse.com/Streets/Old_to_New_London_Street_Name_Changes.htm).

In 1820, Bell Street, named after the nearby Bell Field, was on the very edge of London, bordering open countryside. Soon after this, built-up London spread beyond it. The street was not in a prosperous area. The theatrical impresario and writer John Hollingshead (1827-1904) noted in his “Ragged London in 1861”:
“This is the side of Lisson Grove which is supposed to contain the decent poor; and on the other side, in the streets leading into the Edgeware Road, is a more densely crowded and even lower population. Bell Street, now famous in history as the spot where Turkish baths were first established, is the main stream of a low colony, with many tributary channels. There is no particular manufacture in the neighbourhood to call the population together; a great number are not dependent upon St. John's Wood or the Regent's Park for a living; and they come together simply because they like the houses, the rents, the inhabitants, and the general tone of living in the settlement….
… The Christ Church division of Marylebone, in which Bell Street and all its ramifications stand, is watched over by the Rev. Llewellyn Davies. The whole population of this crowded district is estimated at thirty thousand, and it embraces the worst part of the parish. The parochial work in such an area, which contains at least sixteen thousand idle and industrious poor, is necessarily very heavy....” 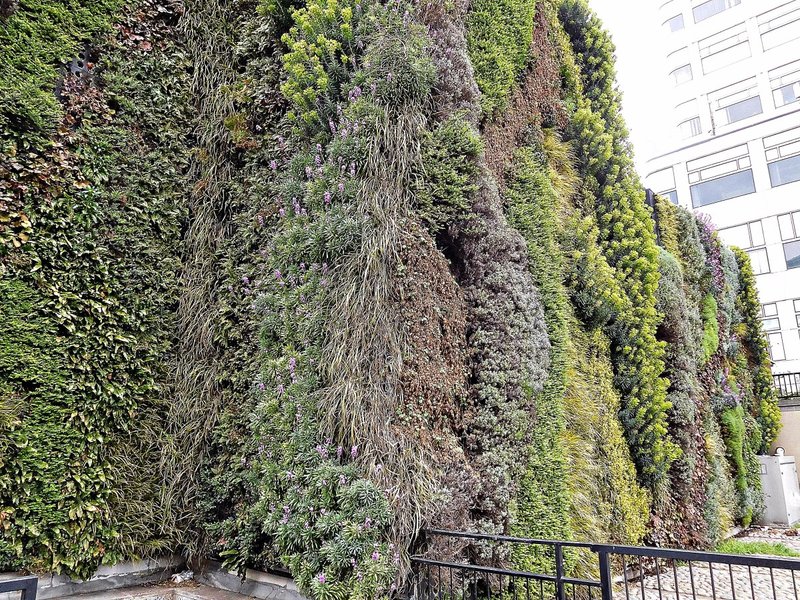 The Turkish baths in Bell Street were the first such establishment in London, opened in July 1860 by Roger Evans, who had suffered from ‘neuralgia’ for many years. Dr RH Goolden (of St Thomas’s Hospital) wrote in “The Lancet”, a leading medical journal (quote reproduced in http://www.victorianturkishbath.org/):
“For some time I watched the effect of the bath in Bell-street … and I went into the bath at such times as that I could observe its effects upon the lower classes, who resorted there in great numbers, not as a luxury, but as a remedy, as they supposed, for disease; and I consider, however much anyone may sneer at my occupation, I could not be better engaged than amongst these people, and studying so interesting a subject, even at some inconvenience. There were often ten people in the hot room at one time, all invalids, and I found them quite willing to tell me all their complaints, and to let me examine them. They were principally artizans, small shop-keepers, policemen, admitted at a small fee. I saw there cases of fever, scarlatina, phthisis, gout ....” 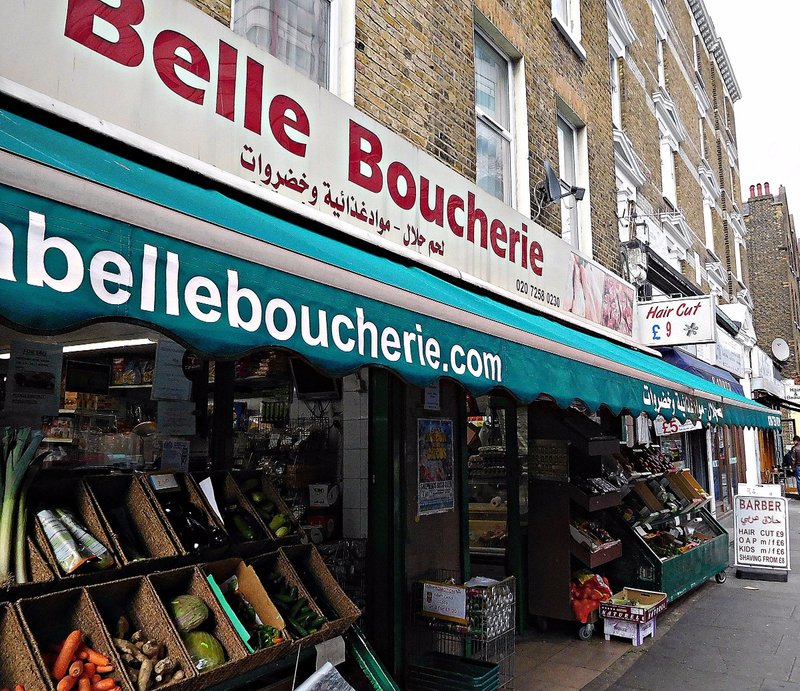 The baths no longer exist. Various sources state that they were at number 5 Bell Street. Today, numbers 3 to 5 are occupied by the premises of the Belle Boucherie, a halal butcher’s shop. If the street numbering is still the same as it was in 1860, then there is no visible trace of the baths. Its neighbouring shops cater to locals including a thriving Arabic speaking community. 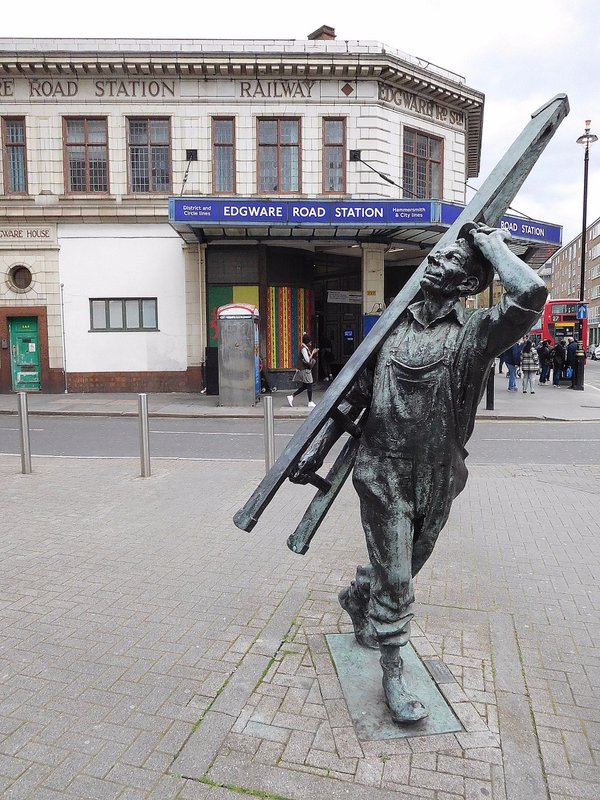 Edgware Road Underground Station on the Metropolitan Line marks the beginning of my tour of Bell street and its environs. Just outside the station, there is a statue of a man, a window cleaner, carrying a ladder. Called “The Window Cleaner”, it was sculpted by Allan Sly (born 1951) in 1990. The window cleaner is depicted looking up at a nearby skyscraper with its sea of glass windows. 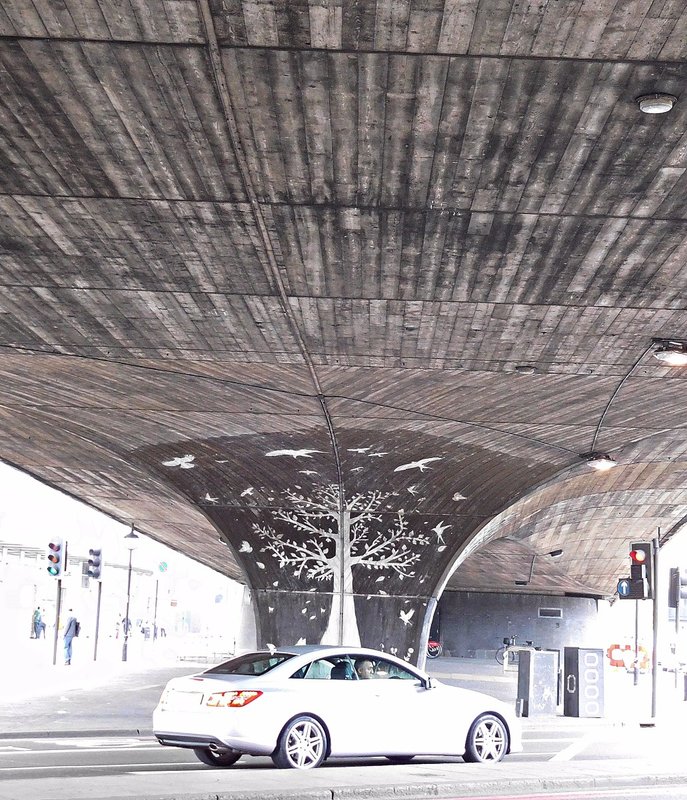 To reach Church Street, it is necessary to walk under the Marylebone Flyover, which carries the A40 over Edgware Road. Constructed in the 1960s, this was opened in 1967 by Desmond Plummer (1914-2009), a Conservative politician and the longest serving Leader of the Greater London Council. At the time of writing this, the brutalist nature of the concrete bridge has been modified by elaborate graffiti representing trees and birds. 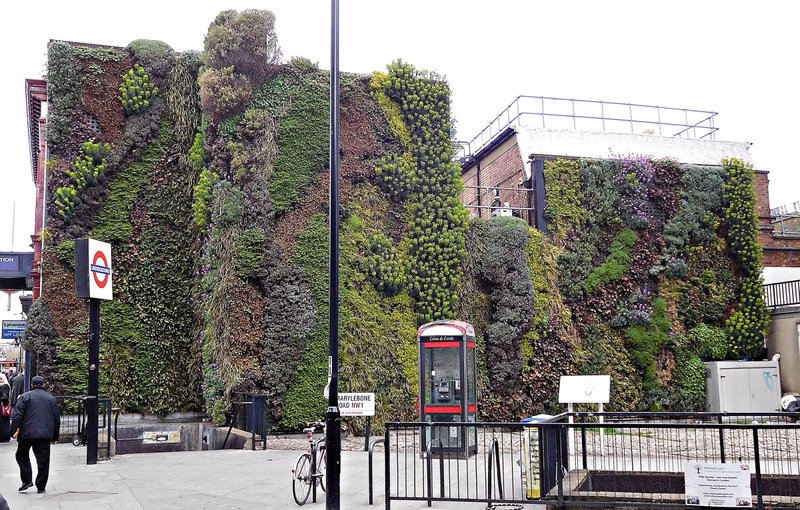 
Immediately north of the flyover, the southern wall of the building that contains Edgware Road Bakerloo Line Station is covered by a riot of greenery, a vertical garden. Known as the ‘Green Wall’, it was designed by a company called Biotecture. Installed in 2011, the wall, measuring 180 square metres, contains “14,000 plants of 15 different species” (source: http://www.biotecture.uk.com), and, apart from looking beautiful, it helps purify the air. 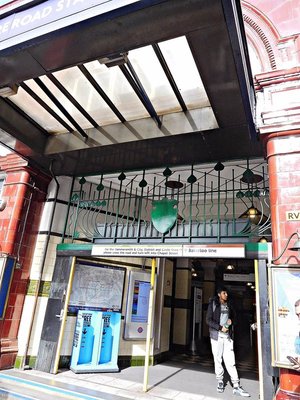 The Bakerloo Line Station, which dates back to 1907, has some art-nouveau ironwork above its main entrance. Originally, the station had an exit in Bell Street, but this was closed a long time ago. The building that contains this former exit contains offices used by the station’s staff. These offices are almost opposite the Belle Boucherie, mentioned above. Close to the butcher, but further away from Edgware Road, there is a slightly scruffy-looking (but clean!) eatery called ‘Ahl Cairo’. 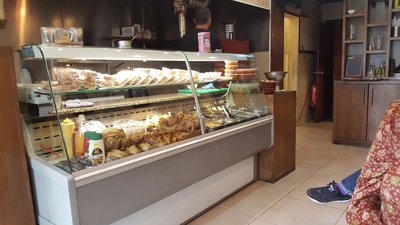 Do not be put off by its appearance. This friendly café/restaurant serves superbly prepared Egyptian food. I have not explored all of its menu, but can safely recommend the following, which I have enjoyed: mutabel, tabbouleh, aubergine and pepper salad, falafels, fried liver, shish kofte, and the sweet dessert fittir (looks like a pizza, but much more delicate and far lighter), not forgetting lovely mint tea. 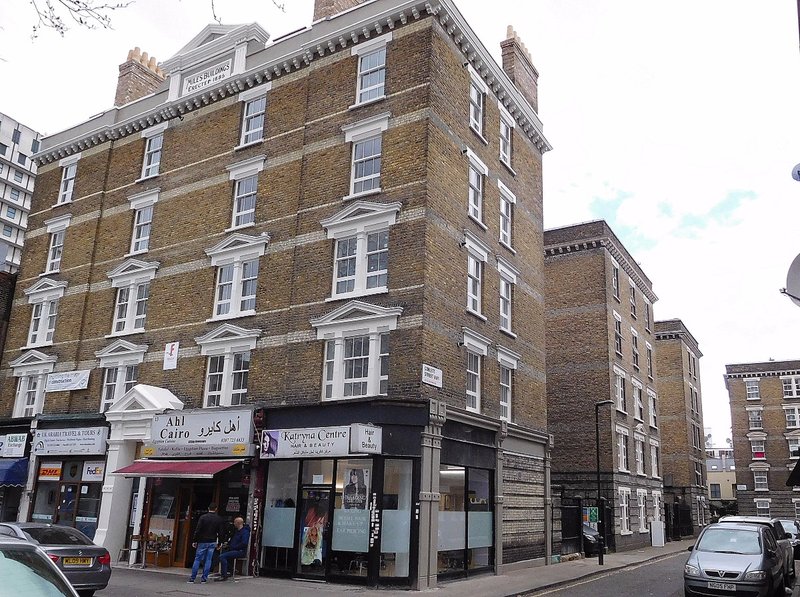 The Egyptian restaurant occupies part of the ground floor of one of the three Miles Buildings. These were built in 1885 by the Improved Industrial Dwellings Company, founded by the philanthropist Sydney Waterlow (1822-1906) in 1863. The company aimed to build housing for workmen and the poor displaced from slums by railway construction works. Waterlow did not employ an architect. He designed the buildings himself. According to a history of the Waterlow family (www.jaggers-heritage.com/resources/The%20Waterlow%20family%20illus.pdf):
“The construction was novel, using concrete floors and roofs, virtually fireproof and well ventilated for health reasons; there were self-contained toilet and washing facilities, open balconies and the staircases were outside. Pompous architects criticised him on the fairly trivial grounds that “coffins could not easily begot down the staircases””.
The three blocks of Miles Buildings can be viewed well from the corner of Bell Street and Corlett Street. 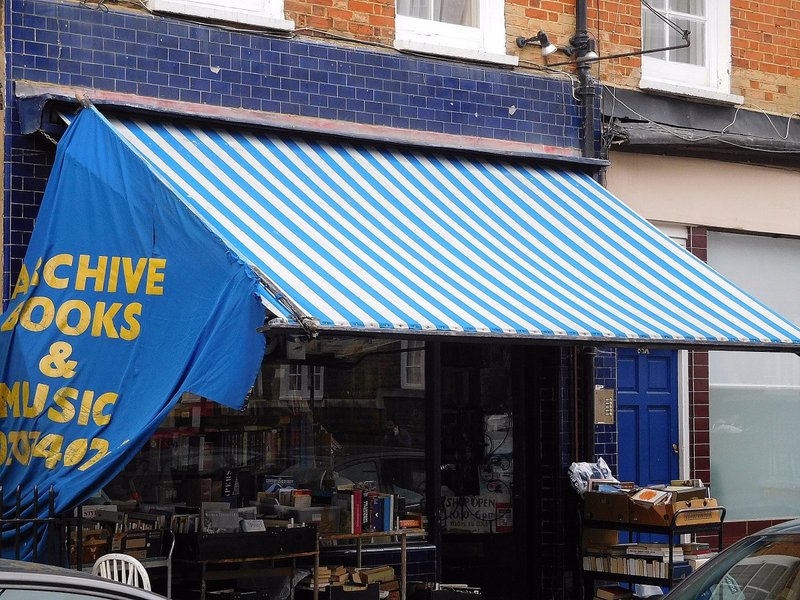 Much further along this same side of Bell Street, the northern pavement of what used to be called ‘Great James Street’, you will come across one of the most wonderful bookshops in London, one of my favourites in the world, Archive Bookstore (established in 1971). Several untidy tables and boxes laden with second-hand books stand under a blue awning on the pavement outside the narrow shopfront. 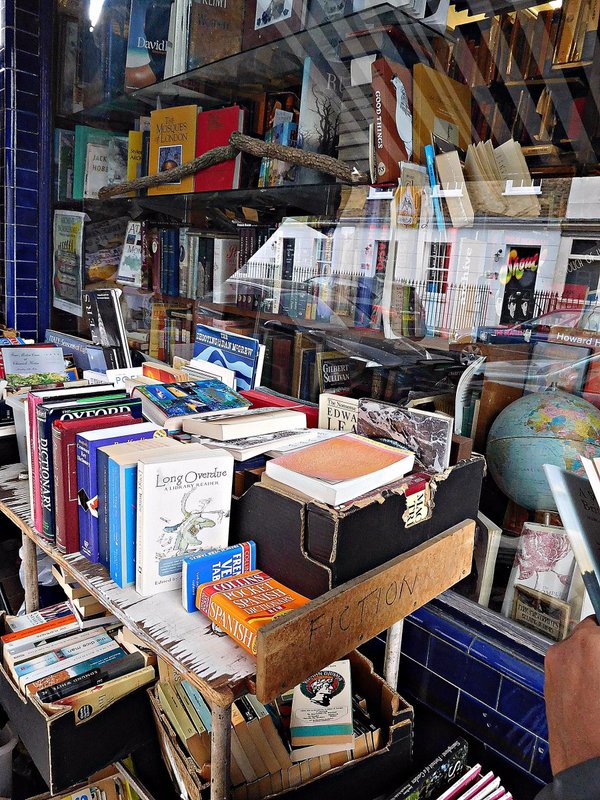 Stepping through the door, you enter an Aladdin’s Cave crammed full of (mostly second-hand and antiquarian) books in apparent disorder. It is decorated with quirky decorations, as well as the odd musical instrument. Often, the shop’s affable owner, Tim, will be surrounded by his friends who come in to chat with him and enjoy cups of tea or cups of sherry. Tim knows his stock well, and is happy to discuss almost anything with you. The store is stocked with books covering a wide range of subjects, and is a particularly good place to find musical scores. 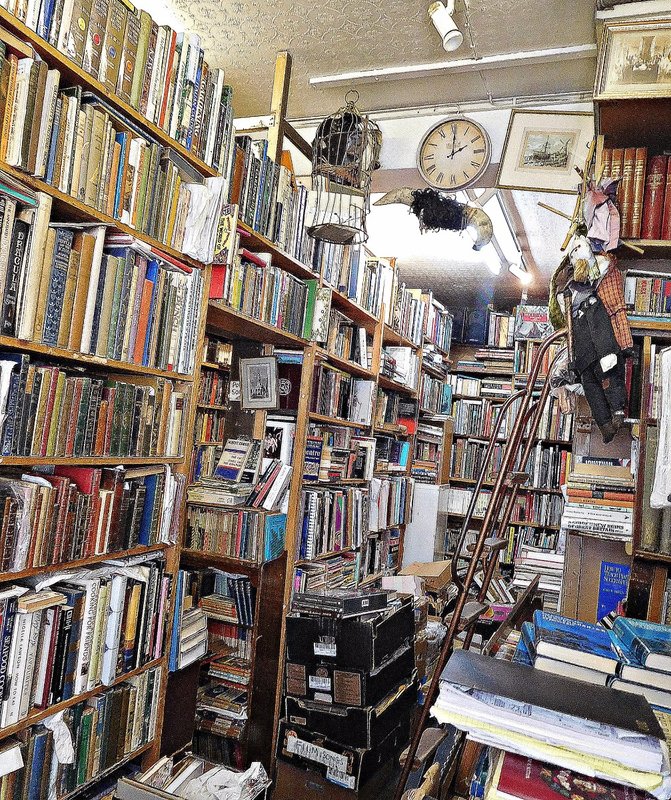 For me, Archive is the main attraction of Bell Street, but for many people it is the Lisson Gallery that attracts most visitors. According to their website (http://www.lissongallery.com/) :
“Lisson Gallery is one of the most influential and longest-running international contemporary art galleries in the world.”
It was founded in 1967 by Nicholas Logsdail, and now has branches in London, Milan and New York City. The branches in London are on Bell Street, one of them entered from that street and the other, which has a frontage on the street, is entered from Lisson Street. The latter branch is next to a currently disused pub, the ‘Brazen Head’. The pub was closed in 2015. 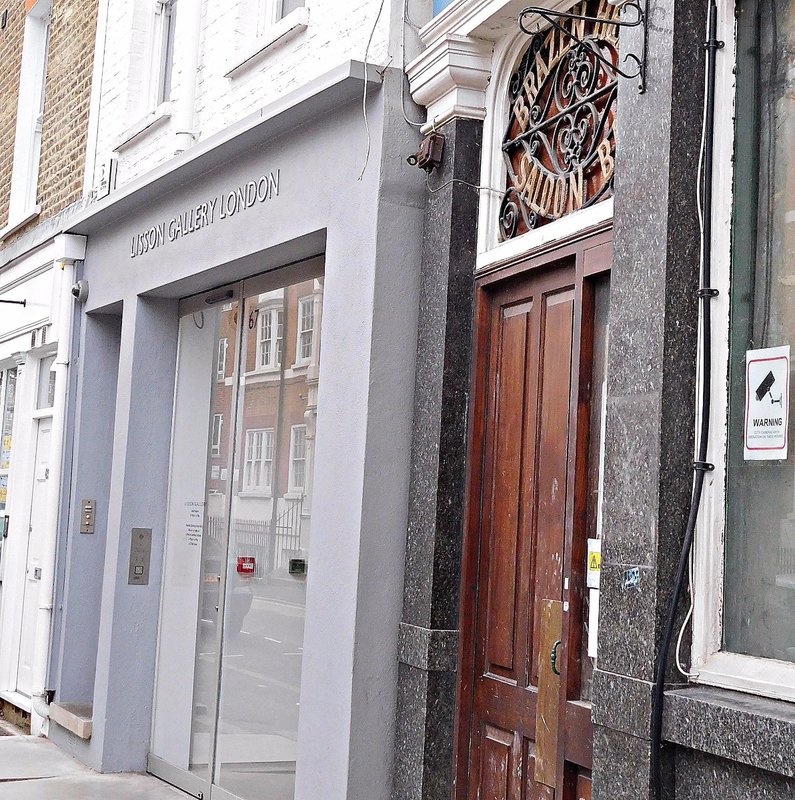 The two branches of the Bell Street gallery offer spaces of varying sizes for displaying art works. The spaces are sparsely decorated with white walls and good lighting. The gallery’s architecture is designed so as not to distract the viewer from the works of art on display. 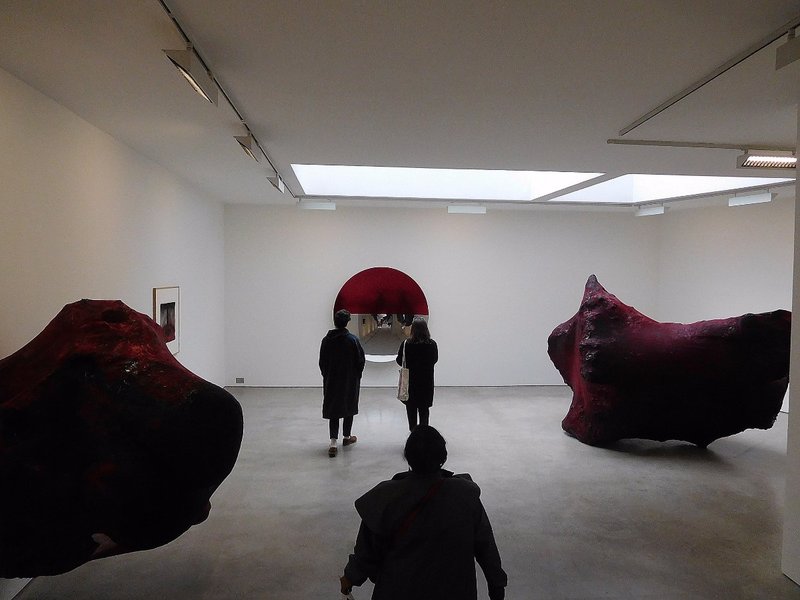 Bell Street, which looks quite insignificant on the maps, is far more interesting that it might seem at first sight, and is a good place to linger and enjoy. 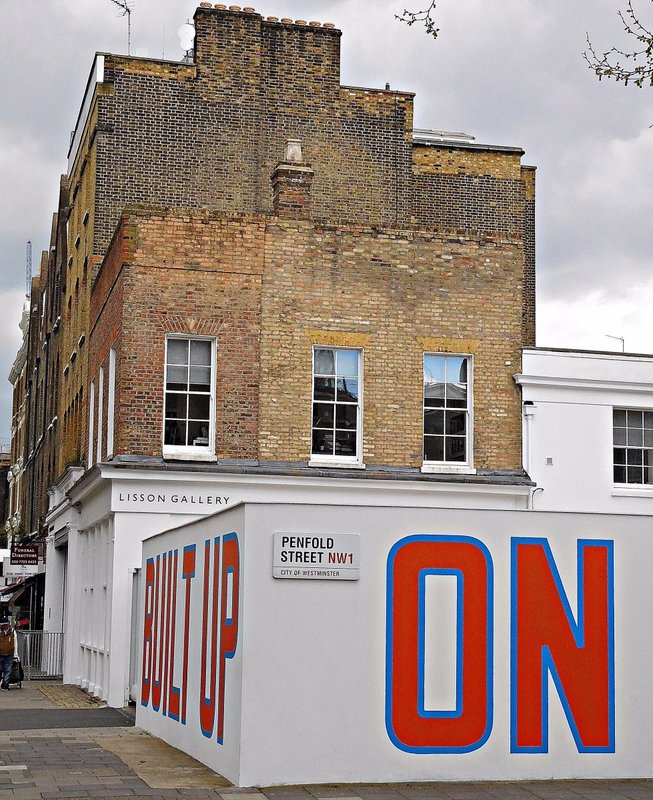 I love the Marylebone Flyover graffiti of the tree and birds. It's beautiful. Around here, we usually have "tagging" instead of true paintings. The tree and birds are a welcome relief and enhancement to the surroundings.

The bookstore looks fascinating. It's on our to-find list for the next trip to London.

I love the look of that bookshop Adam - I think I better start making a list of 'to sees' from you excellent entries here.

Bookshop looks great. I could browse in there for hours.

Your inputs are superb, great Virtual travelling for me with reminders of Edgware subway of decades back

I used to visit this area (mainly Church Street) regularly when I worked for Westminster City Council but haven't done so for years. Those murals under the flyover a welcome new addition