Two Temple Place - difficult to visit, but well worth making the effort! 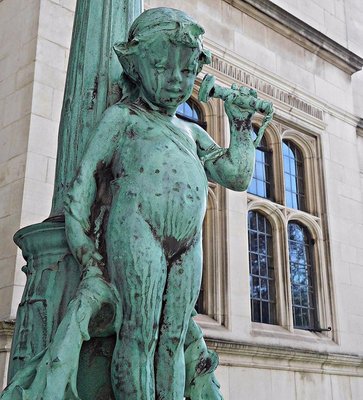 A few years ago, after entertaining my friend Roy Moxham to lunch at Middle Temple Hall, he took me to see something curious nearby. He showed me four metal ‘putti’ (or cherubs) that had become greenish-blue because of oxidation. 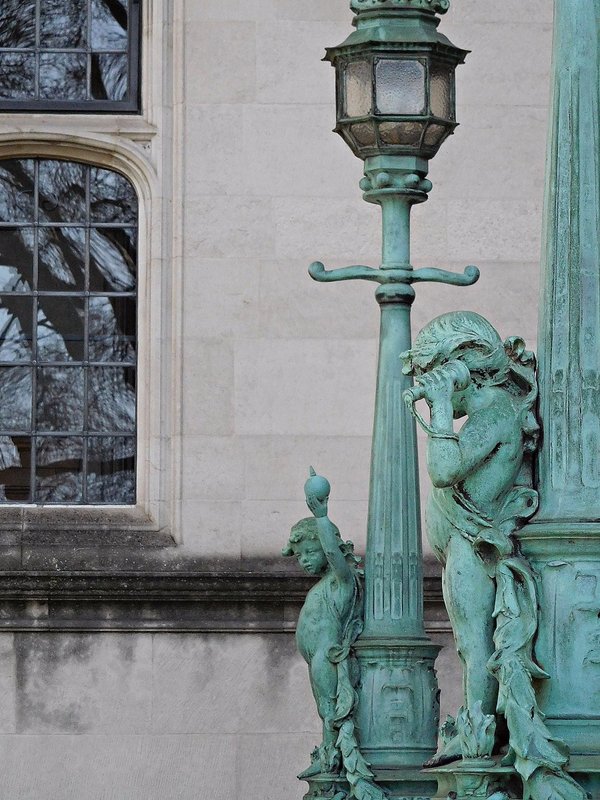 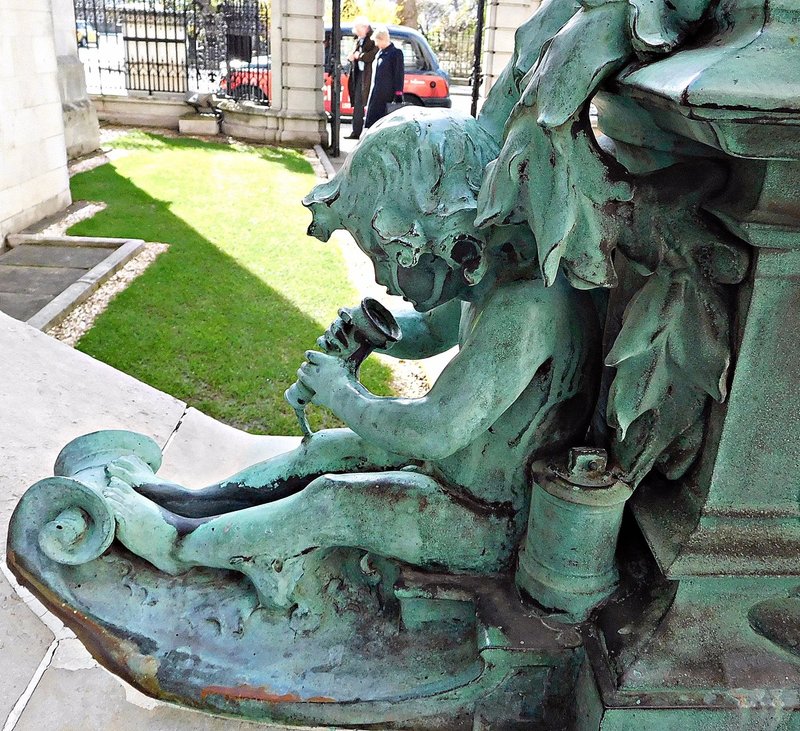 Two of them were at each side of the foot of the staircase leading up to a closed wooden front door. The interesting thing about these angelic figures is that they were depicted using early forms of telephonic and telegraphic equipment. On one side of the stairs, one of the cherubs was speaking into an old-fashioned telephone, and the other was listening to the receiving end of a similar thing. Across the staircase, the one putto is busy operating an antiquated telegraph apparatus and the other is standing with an old-fashioned light bulb held aloft. 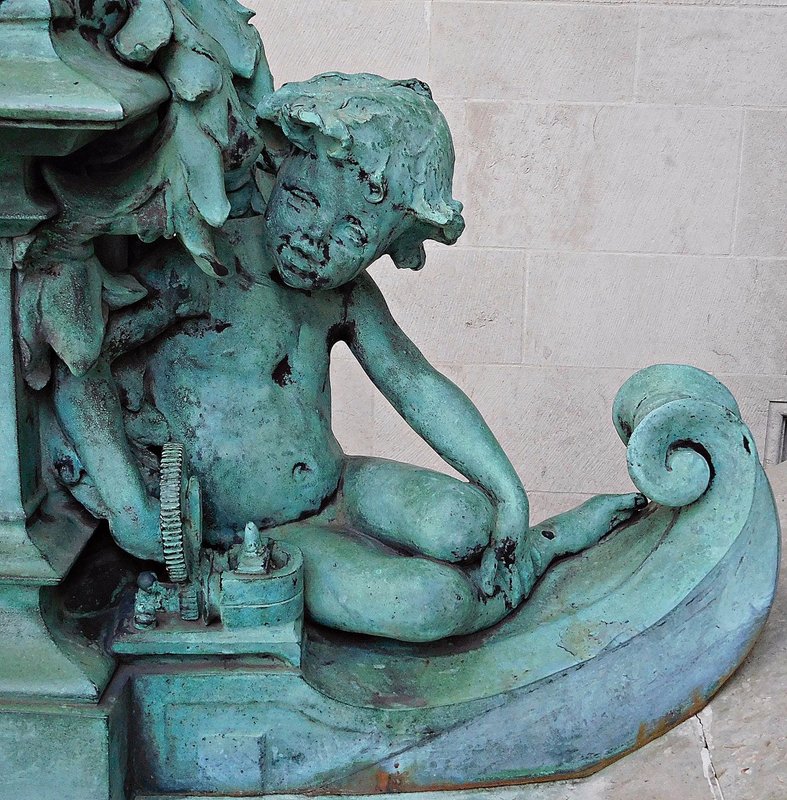 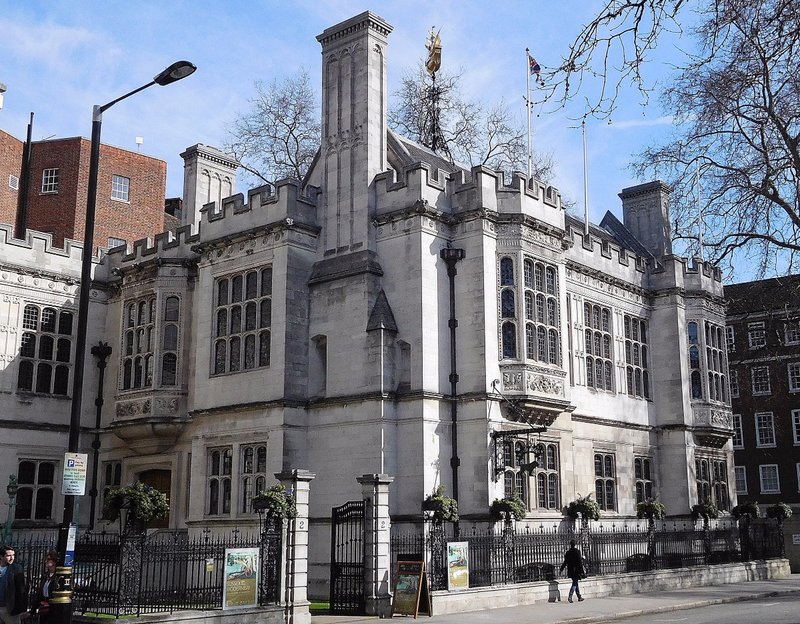 The four putti are placed outside the entrance to a remarkable late Victorian neo-gothic mansion, now known as ‘Two Temple Place’. This elegant edifice was constructed between 1892 and 1895, and bought by William Waldorf Astor (1848-1918), who was born in the USA in New York City, and who added mock Tudor crenellations to it. 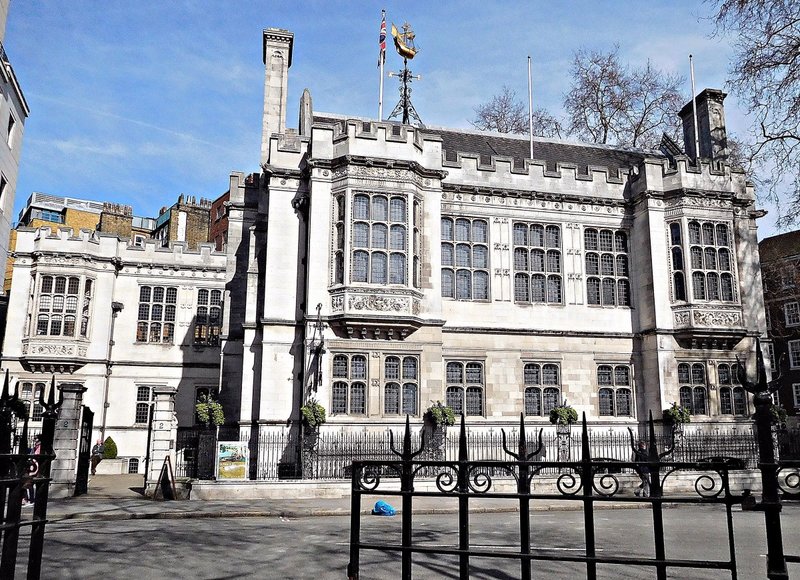 In America, he made his name and fortune as a politician, lawyer, and newspaper owner. In 1878, he married Mary Dahlgren Paul (1858-1894), and they had five children. A family feud in 1891 caused the Astors to move to the UK. The nature of the feud had its origins into whether his wife or his uncle’s wife should be the “official Mrs Astor” in the USA. His uncle’s wife won the battle! Astor became a British Subject in 1899, and because of his extensive and highly generous philanthropic works he was awarded a peerage in 1916, and was made a Viscount the following year.

Amongst his properties in the UK, Astor owned Hever Castle in Kent and gave the Cliveden Estate (overlooking the Thames west of London) as a wedding present to his son Waldorf Aster. In the UK, he was involved with running (owning) several newspapers including “The Pall Mall Gazette” and “The Observer”. In 1908, he opened the Waldorf Hilton Hotel in London. This hotel in the Aldwych is still being used by visitors from all over the world.

Two Temple Place was used mainly by Astor as his estate office. Its architect was John Loughborough Pearson (1817-1897). Born in Brussels (Belgium), Pearson was one of Britain’s leading exponents of neo-gothic architecture. He built or modified many churches and cathedrals in places as far apart as Truro in Cornwall and Brisbane in Australia. However, most of the buildings connected with him are in the UK. 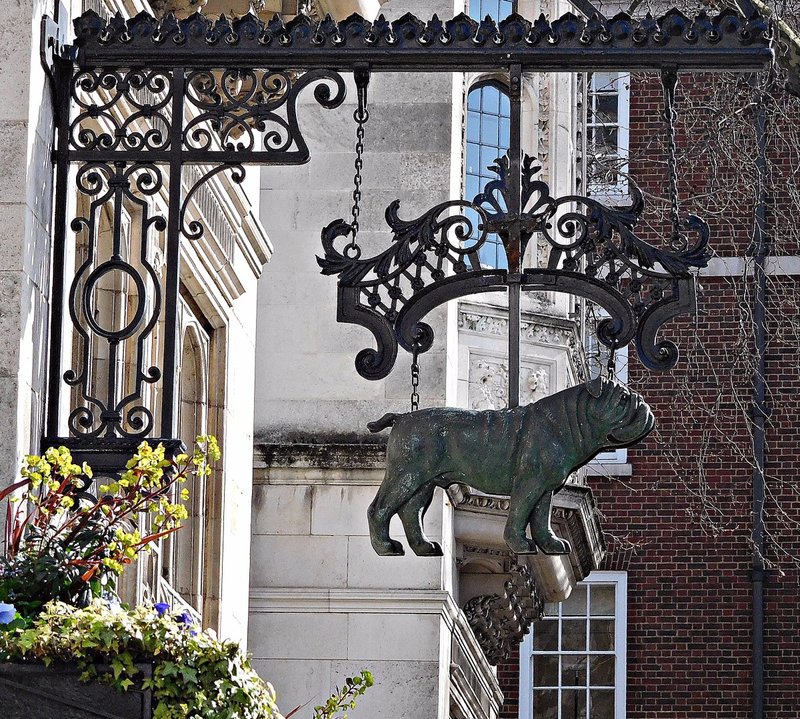 A sign, depicting a bulldog, hangs from the wall of the Two Temple Place closest to Temple Place. This is because nowadays the building is used exclusively by the Bulldog Trust. This is a charitable organisation that was founded by Richard Q Hoare in 1983. Its aim was to provide support and advice for charities that were facing immediate financial crises. Hoare was a Managing Partner in the long-established (since 1672) Hoare & Co, private bank, which has its headquarters in Fleet Street. The Bulldog Trust’s charitable aims have widened since its foundation. 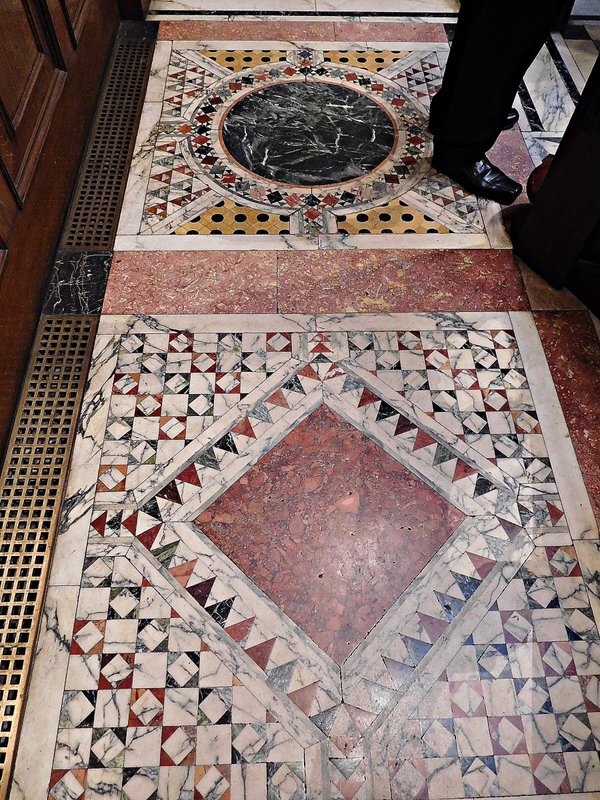 Public entrance to Two Temple Place is restricted to a few months of the year. Once a year, just before spring begins, the Trust puts on an exhibition that is open to the public. This year (2017), the exhibition is of works of art created in Sussex during the years between the two World Wars. It is called “Sussex Modernism: Retreat and Rebellion”. I really enjoyed this show. I am sad that I have missed some of the other exhibitions put on at Two Temple Place. In 2013, I saw a wonderful exhibition called “Amongst Heroes: The Artist in Working Cornwall”. The current show is on between the 28th of January and the 23rd of April.

It is only when these exhibitions are being shown that members of the public are allowed to see inside Astor’s magnificent building. At the risk of contradicting myself, the public can also be admitted occasionally on special guided tours (see: http://twotempleplace.org/involved/tours/ )

The ground floor room that runs beneath the great hall on the first floor is used as an exhibition space. There is also a café/restaurant on this floor as well as a room where one can sit quietly. 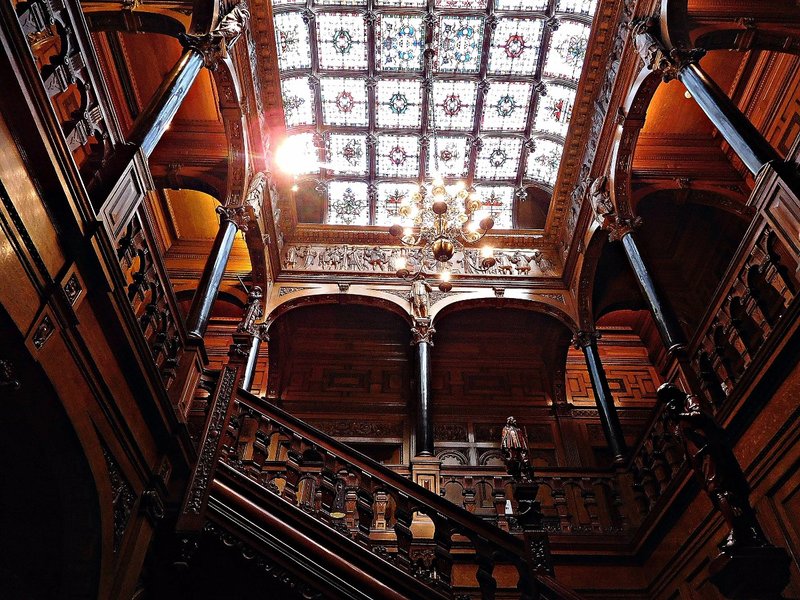 A door leads from the large exhibition space to a corridor that, in turn, leads to the foot of a grand staircase. The floor of the ground floor landing is made with inlaid coloured stones, and looks just like the floors in renaissance or earlier churches in Italy. When it was laid, workers from Italy had to be employed because there was no one in the UK capable of doing that kind of work in the late 19th century. 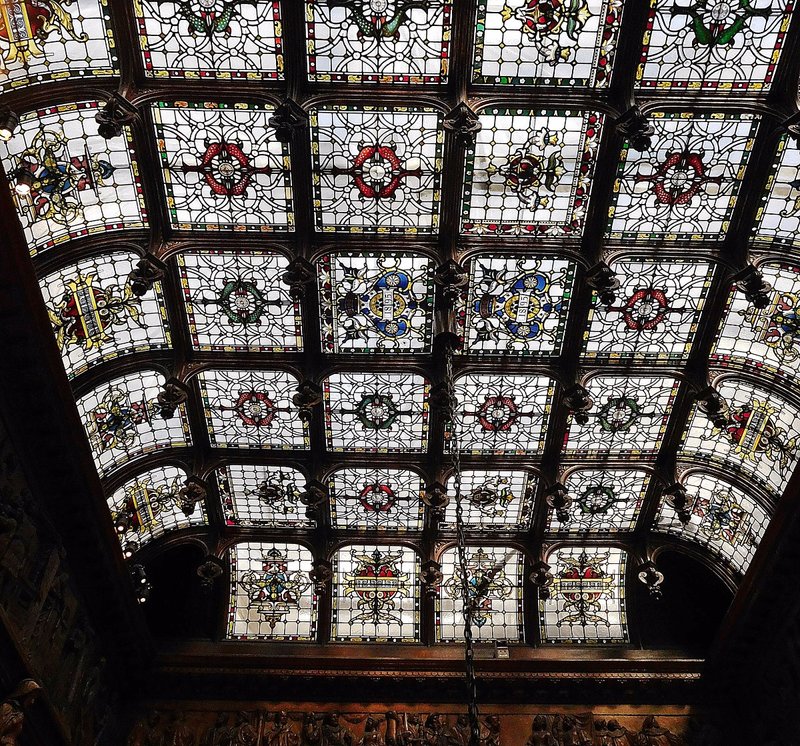 The ceiling of the stairwell is made of multi-coloured stained glass. 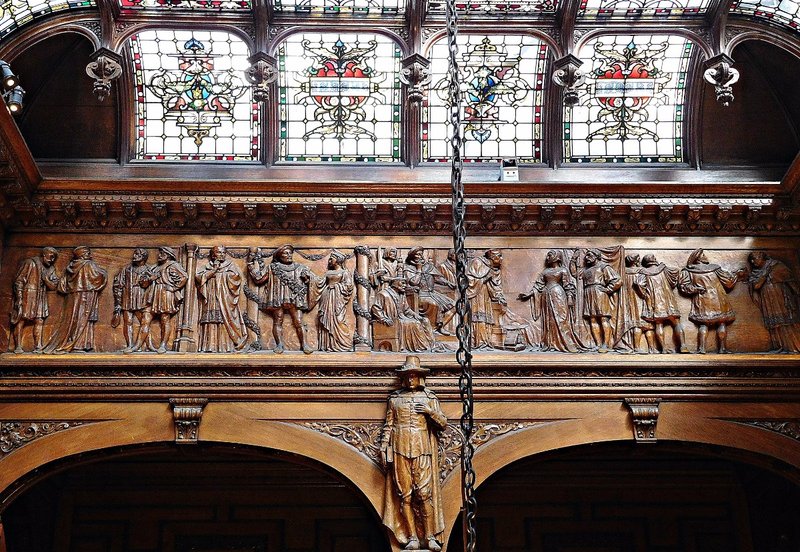 Beneath this, there are intricately carved wooden friezes. The first-floor landing has some circular arches. Wood panelling encloses the whole staircase. 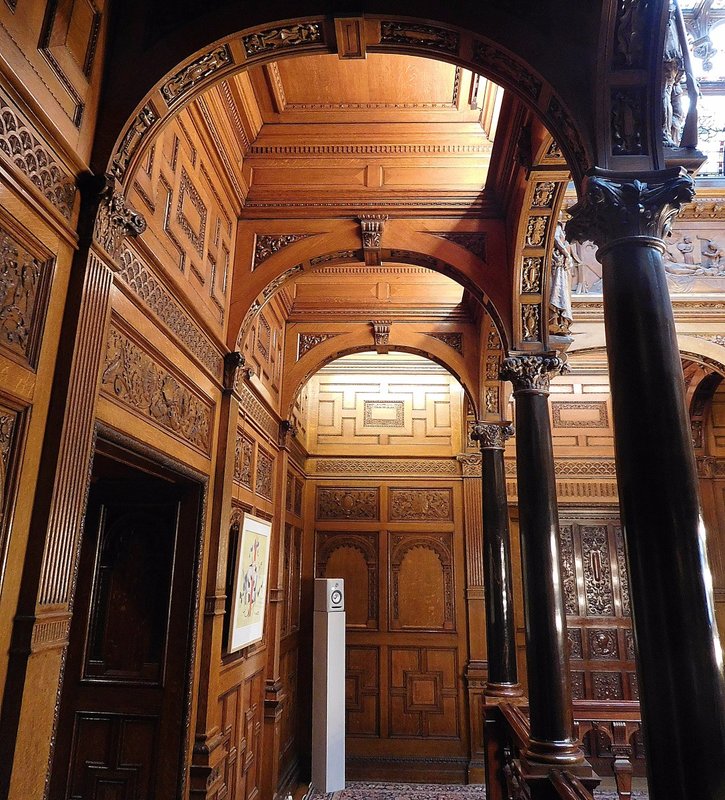 Wooden carved figures stand on the newel posts of the elaborately decorated wooden banisters. The staircase and its decorations are nothing short of spectacular. 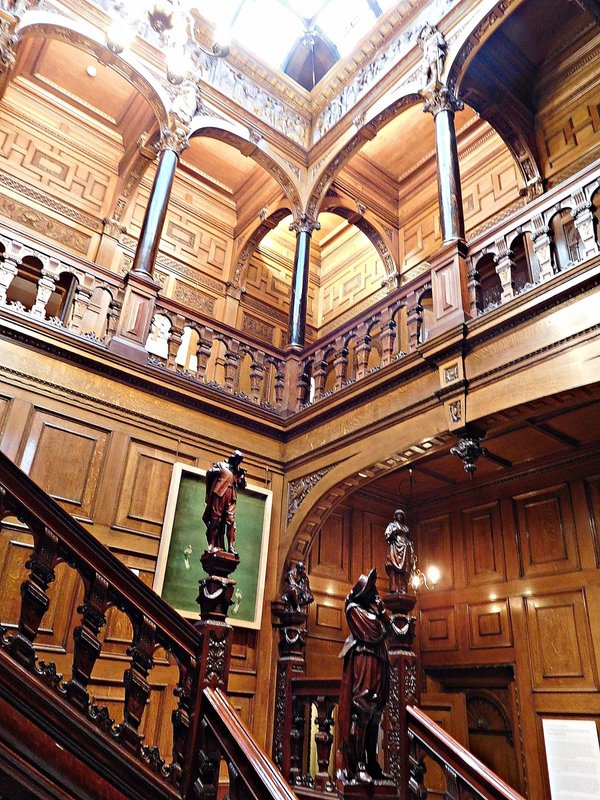 The first-floor has several rooms open to the public. One of these is a well-stocked gift shop, which sells items carefully chosen to be relevant to the exhibition being shown at the time. 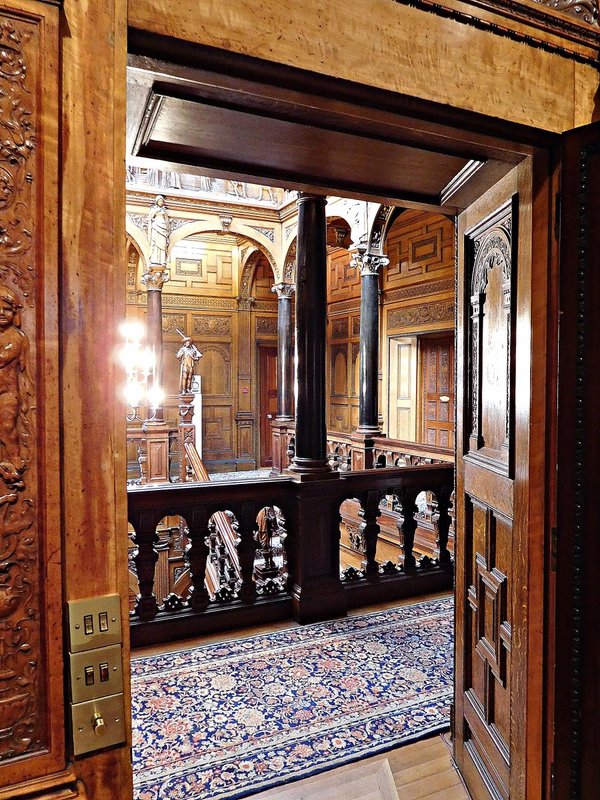 Opposite the gift shop, across the stairwell, there is a small exhibition room. This leads into what I will call the ‘great hall’. With elaborately decorated wood panelled walls, this hall has a hammer beam ceiling, reminiscent of that which can be seen in the nearby Middle Temple Hall. 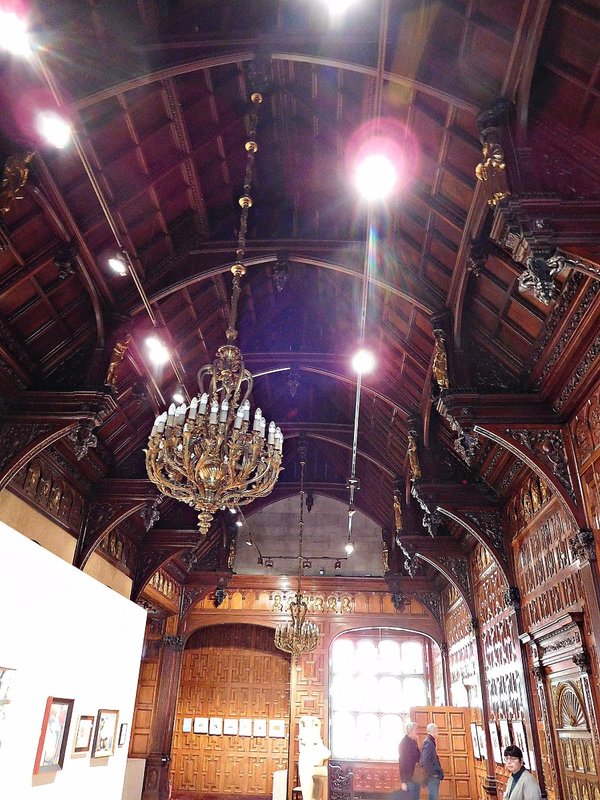 At one end of the hall, there is a fireplace flanked by two tiny windows and an exuberantly carved wooden surround. 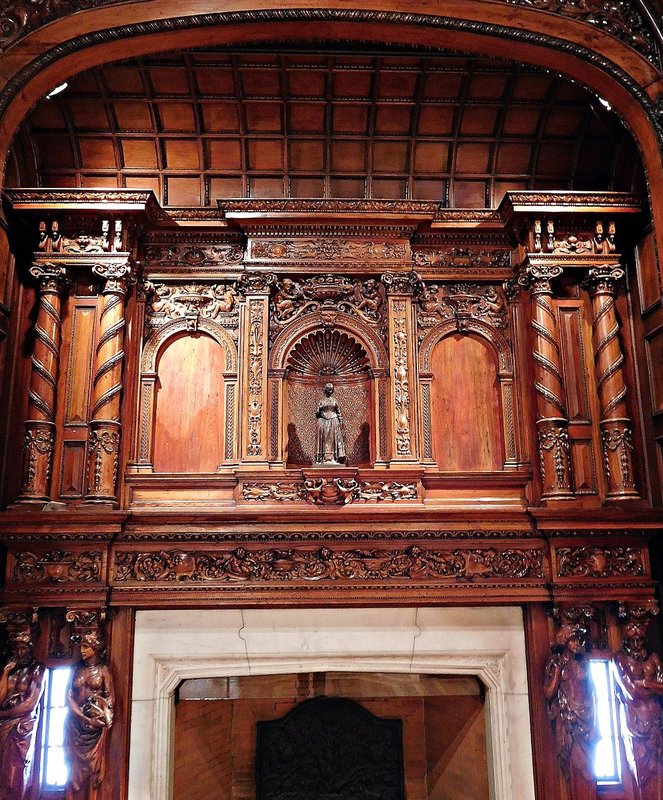 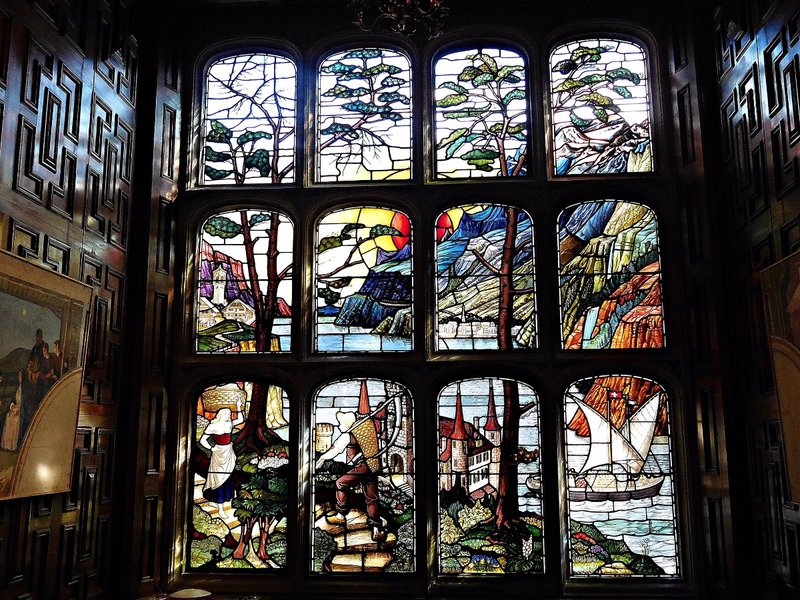 At each end of the long hall, there are two large windows filled with panels of stained glass. These windows with their highly-detailed scenes of great interest were made by the workshops of John Clayton (1827–1913) and Alfred Bell (1832–1895). They often worked with the architect of Two Temple Place on his projects. 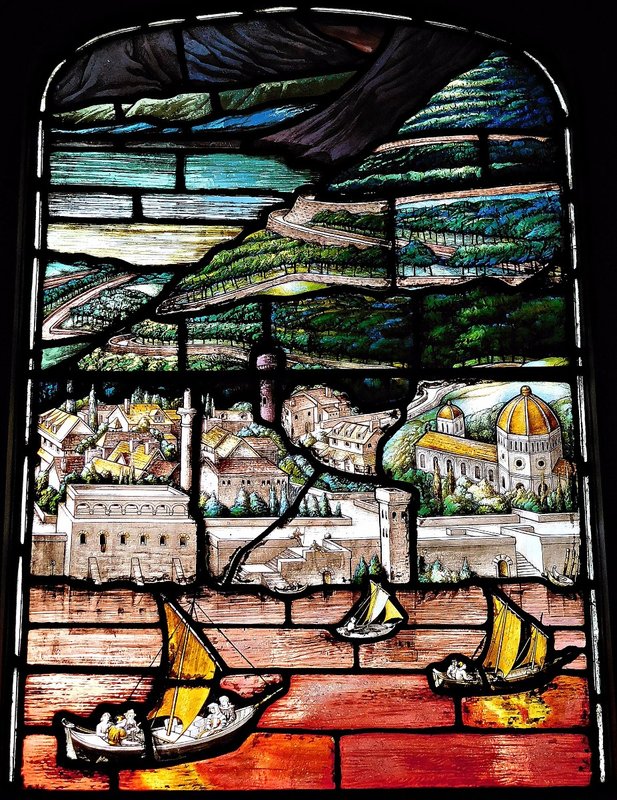 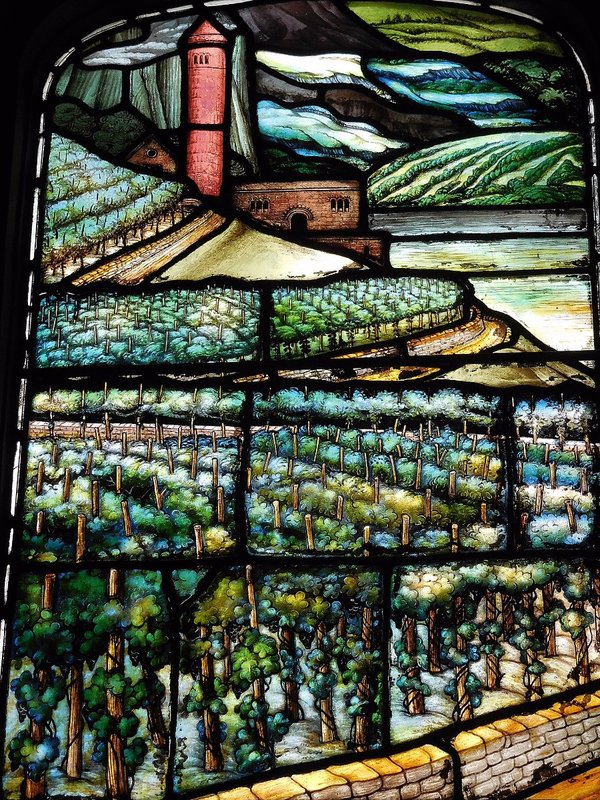 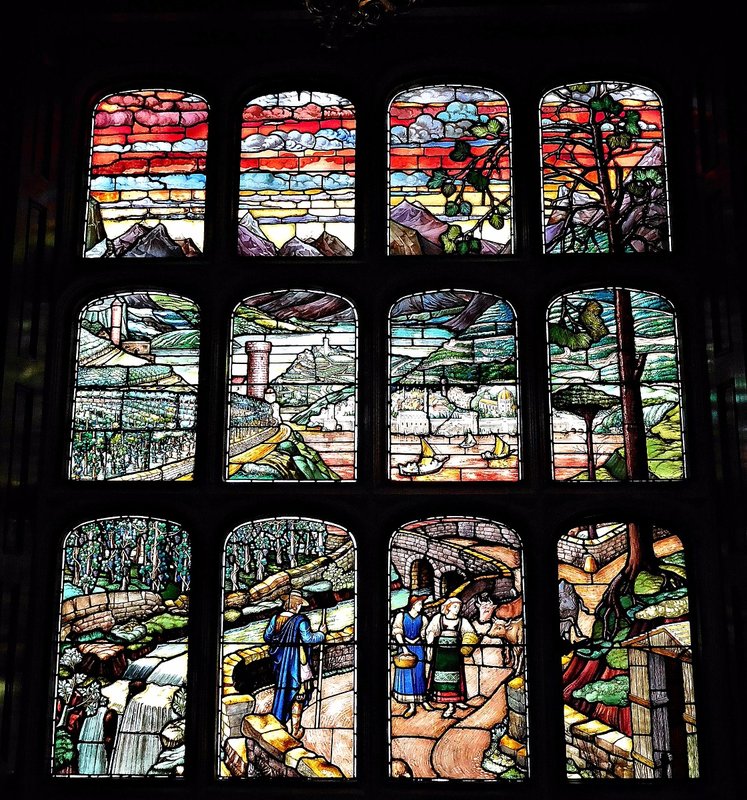 Two Temple Place: the other window

The window that contains sailing boats in its lower right panel and grape vines on the left is entitled “A Swiss Summer Landscape”. 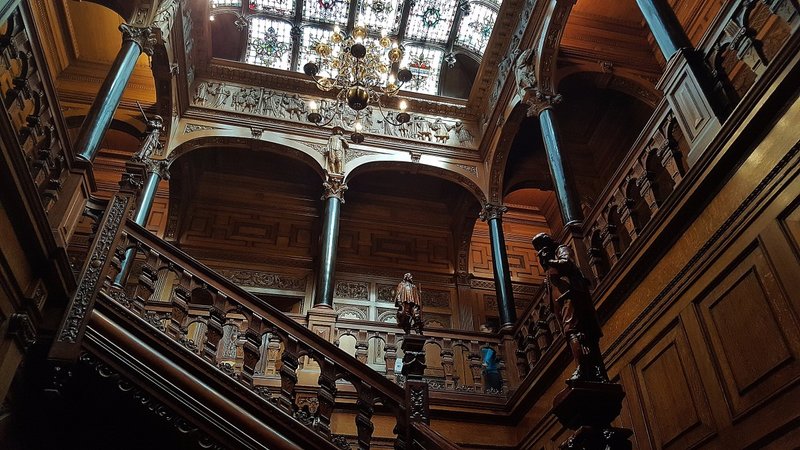 If you can gain entry to Two Temple Place, then do not turn down the opportunity. You will not be disappointed. I am so very grateful that my friend Roy introduced me to this wonderful and surprising building. 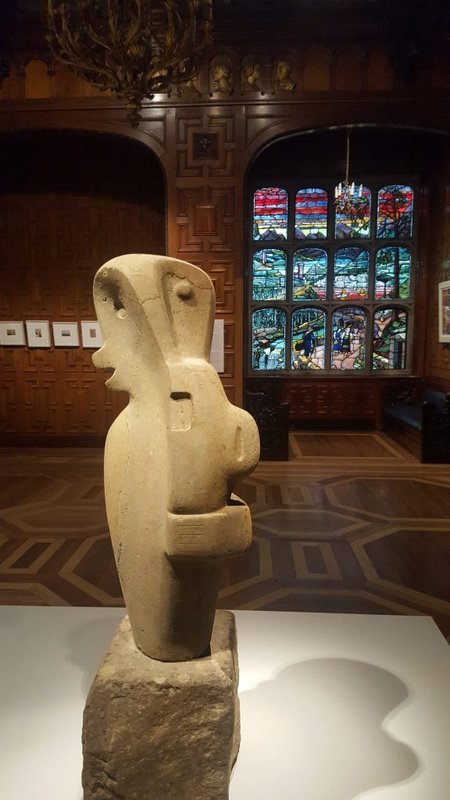 You have again shown me something in my own city that I knew nothing about! I will try to get here before 23rd April for sure!

I do like Two Temple Place as is such a unique building and it doesn't matter how many times i went there is always a pleasure to go and see the exhibitions they have on.

This is a treasure indeed ! That will be an ectra day for me on my next transit via LHR Great write up Adam ;-)))

What an amazing building .. it would be hard for any exhibition to compete with the beauty of the building itself.