Some brutalist architecture in the centre of the City of London 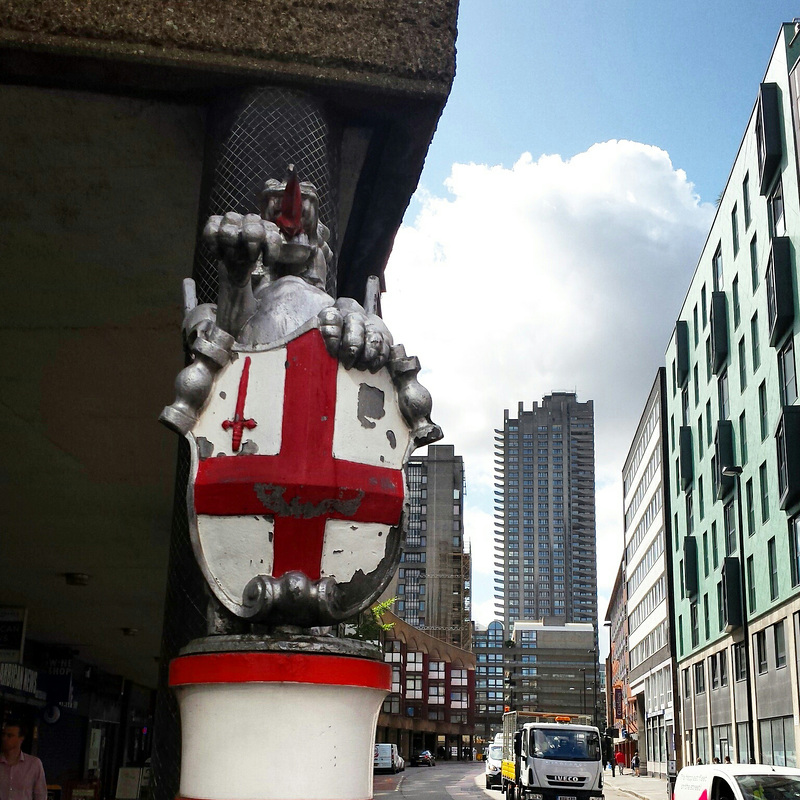 Approaching the BARBICAN from the north along Goswell Road

We have the hostilities between Germany and Britain during the 1940s to thank (or to blame) for the existence of the Barbican development just northeast of St Pauls Cathedral. 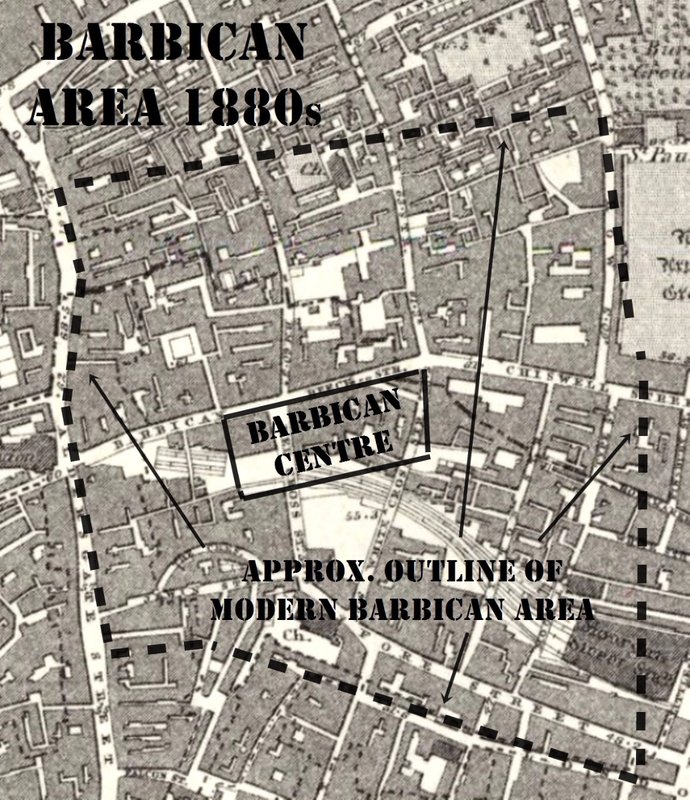 The present Barbican development (or urban complex) is bounded (approximately) by: London Wall to its south; Goswell Road (that becomes Aldersgate Street) to its west; a series of small streets (including, for example, Fann Street and Criplegate Street) to its north; and Moor Lane to its east. Prior to WW2, this area was a maze of small streets through which a section of the Metropolitan Railway line ran above ground. This section of the line now runs underground between Barbican and Moorgate Stations. 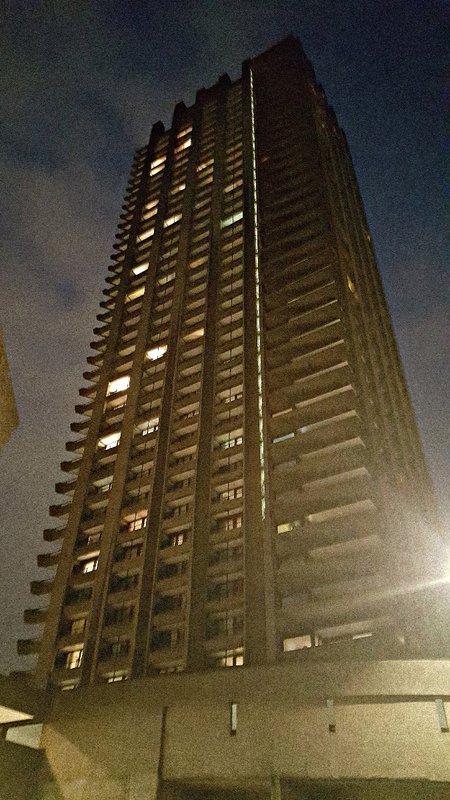 The name ‘Barbican’ derives from a Latin word ‘barbecana’ which meant ‘fortified gateway’. This gateway in the wall surrounding Roman London stood roughly where the Museum of London stands today. Before WW2, there was a street, which no longer exists, in the area called ‘Red Cross Street’. The northern end of this was the site of the Roman gateway with its watchtower. The gateway was used as a castle in the 13th century by King Edward the First, but it was destroyed in 1251. Later, it was restored, but by the 17th century all traces of it had disappeared. It became the site of the former Willoughby House, also now non-existent. In its memory, one of the buildings in the current Barbican complex is named after it. 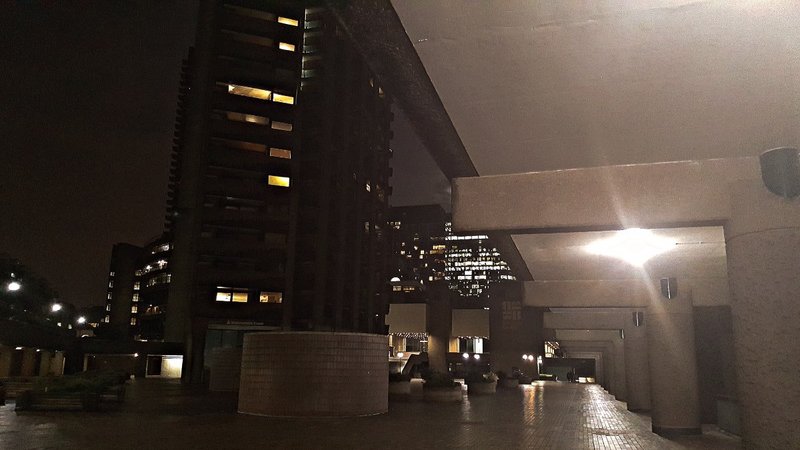 The Barbican complex built in the district (most of the Ward of Cripplegate) that had suffered so much bomb damage was constructed between 1965 and 1976. The development consists of both high rise and lower residential buildings as well as the Barbican Centre, which is one of London’s major cultural venues. One might say that it’s the City of London’s counterpart of the Thames-side cultural complex, the South Bank Centre. 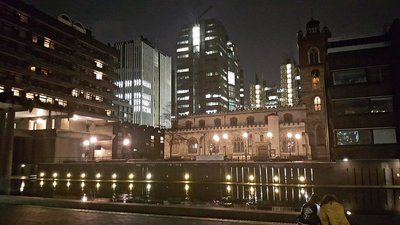 I suppose that it was hoped that the creation of the Barbican would give rise to another lively neighbourhood in the city. I believe that it has failed, rather like Canary Wharf and some of the other Dockland redevelopments. These places become lively at certain times, but otherwise seem deserted. For example, Canary Wharf is a hive of activity during office hours, but almost a ghost town the rest of the time. Likewise, when there are events at the Barbican Centre, there are swarms of people, but the rest of the time it feels as one has the Barbican area to oneself. It takes more than construction to produce a real, vibrant neighbourhood. Maybe, given enough time, the Barbican will become like, for example Covent Garden, a place that people like to love linger. 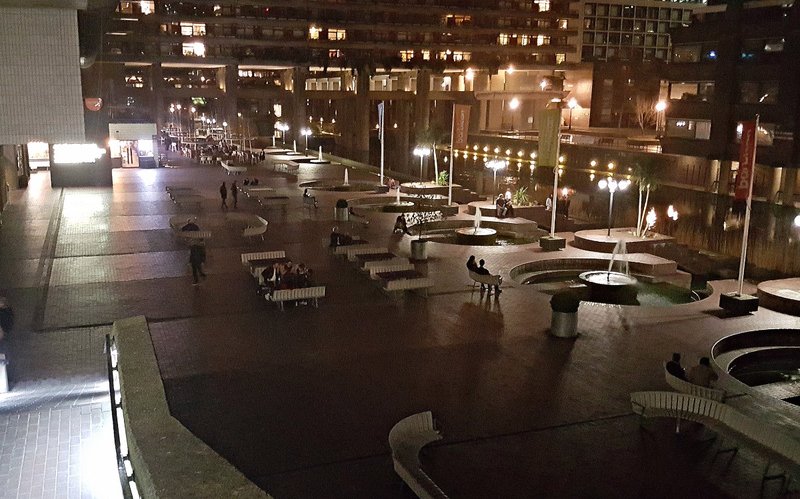 The architecture of the Barbican area, including the Centre, is uncompromisingly harsh, unfeeling. It is a brutalist architect’s paradise. The few open spaces and water features that punctuate this mass of concrete do little to alleviate its inhuman feeling, yet it is home to many who wish to live close to the heart of the city. I have never met anyone who lives there, so I cannot say whether my antipathy to the place is shared by its residents. 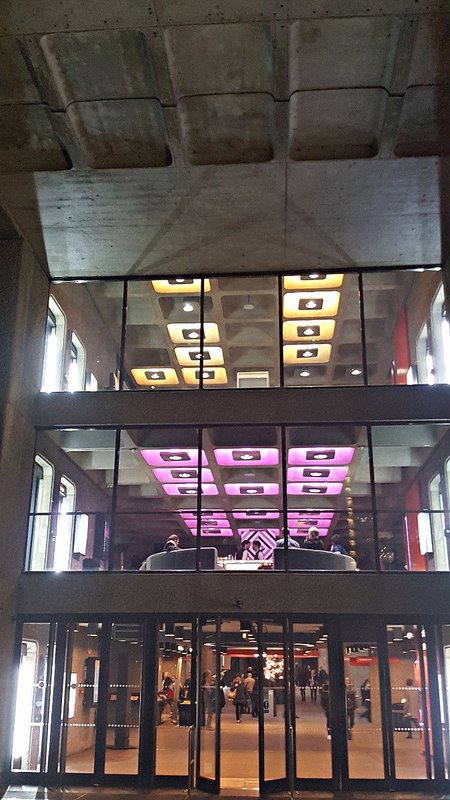 Barbican Centre from outside

Apart from residential buildings, there are others with different purposes including the Centre, City of London School for Girls, The Guildhall School of Music and Drama, and the Church of St Giles Cripplegate (which more, rather than less, survived the ‘Blitz’). The rest of this essay concerns the Barbican Centre. 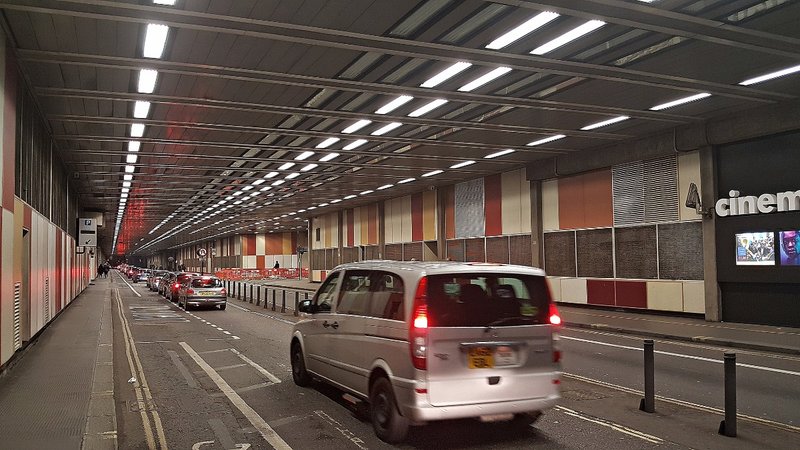 A long tunnel containing Beech Street, which existed before WW2, runs under the Barbican from Goswell Street to Silk Street that leads south to the main entrance of the Centre. The tunnel carries both vehicular and pedestrian traffic. Pedestrians may avoid the tunnel by walking along a series of walkways that weave between the brutalist architectural blocks above the tunnel before descending via a stairway to the ‘piazza’, the Barbican Lake Terrace, that runs between the Centre and a body of water with fountains. 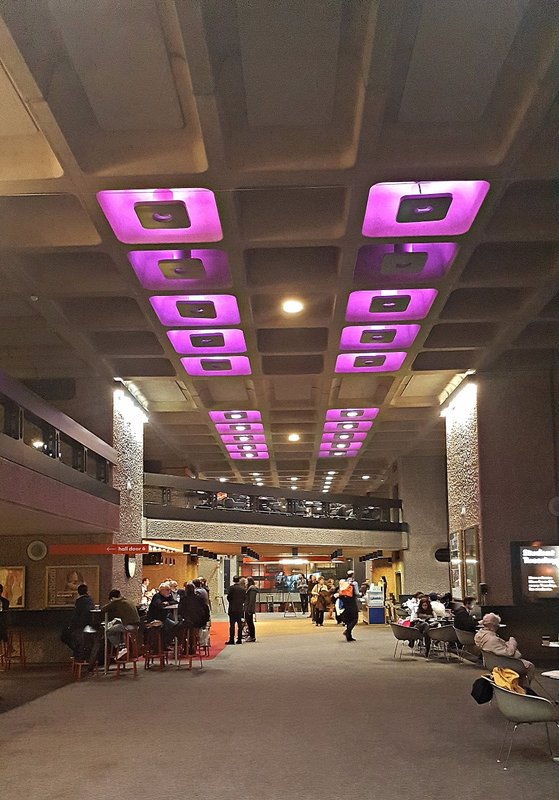 Barbican: a foyer or lobby 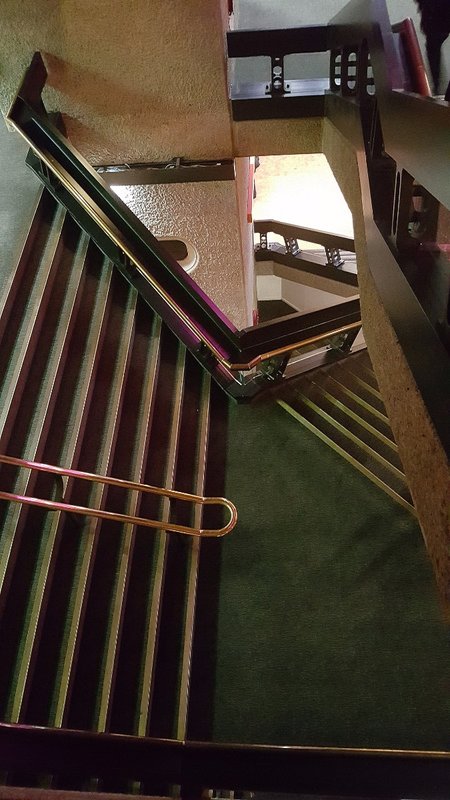 The common parts, the lobbies, waiting areas, and staircases, of the Centre are a disaster. Whoever designed it must have been determined to make it as difficult as possible for, even regular, visitors to find their way around. To get from A to B, the visitor is forced to go up one set of stairs and down another even if A and B are actually on the same level. 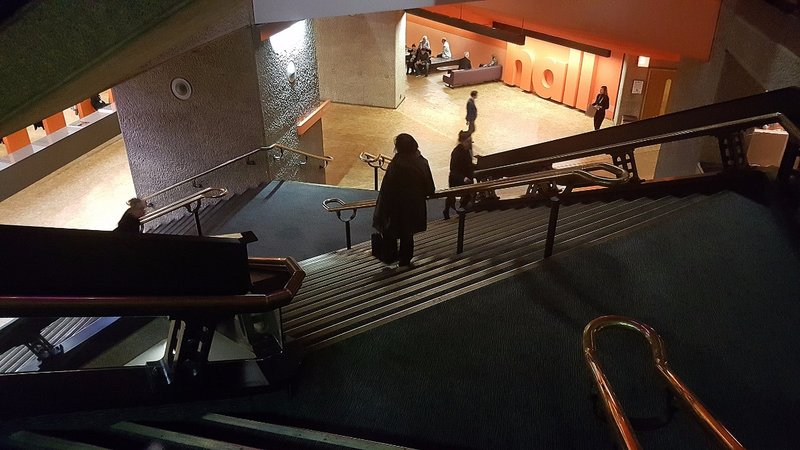 Signposting is terrible. So, it is lucky that there are plenty of staff members to ask for directions. On top of that, the interior design is ugly. Parts of the building bring to my mind some of the sets of Fritz Lang’s 1927 film “Metropolis”, the rest is non-descript. The only thing that I like in the common parts is an expanse of flooring made from wooden rectangles, rather like parquet flooring. 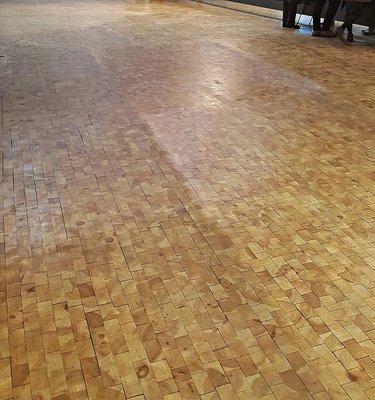 Entering the Barbican Concert Hall from the common parts of the Centre is a delightful relief. This spacious hall is beautiful with its walls lined with wood panels and its ceiling with curved metal sheets. The seats are comfortable and well-spaced so that people may walk along a row without having to ask seated people to stand up to let them pass. Every seat has a good view of the stage. This is also the case with the Barbican Centre’s magnificent theatre. Even sitting in the back rows of the hall furthest from the stage, there is no problem hearing even the quietest sound produced by the performers. The acoustics of the hall are near perfect. This hall is a wonderful place to hear music – whether it be performed by a soloist or a full orchestra. It is worth suffering the hideous, badly designed waiting areas to enter this hall. 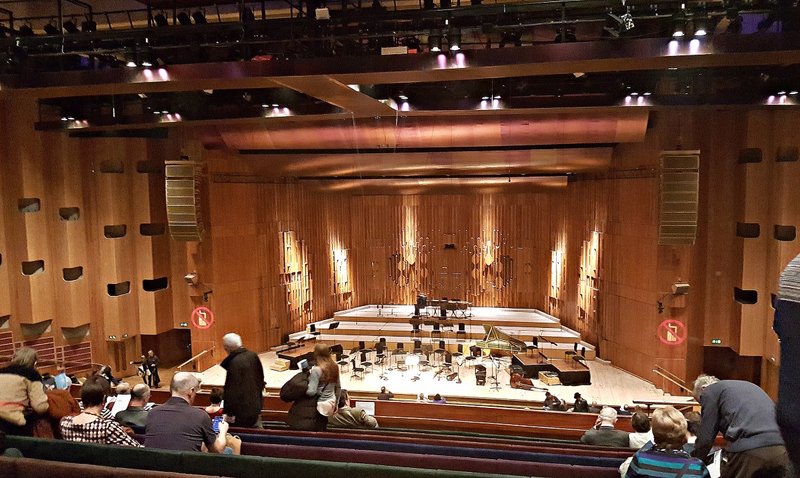 Barbican Barbican Hall: inside the auditorium

Although I used to admire the brutalist architecture in London when I was a vaguely rebellious teenager with ideas of studying architecture (quickly abandoned) in the 1960s, now it often gives me the ‘blues’.

I used to live not far from the Barbican, and have always had mixed feelings about it. I quite like the brutalist look of it, and I like the idea of the little community. They also have what they claim is the second biggest conservatory in London, which is a lovely place to while away some time.

However I do find the way it is often so deserted to be a little disconcerting, and I get lost every time, even if I do follow those yellow lines.

Yes, I know the conservatory, but have never been into it. Getting lost is what the Barbican is all about!

Very interesting Adam and well written with descriptive words that created a vivid picture in my mind of what you were conveying.
I enjoyed the read and pictures

Small world, one of my ZA friends was the secretary for one of the Engineers on this project in the late 60's , so the construction site was a regular stop. Great intro into another corner of your great city ;-)))