AN OASIS NEAR OXFORD STREET

RETAIL RESPITE: An oasis a few yards from busy Oxford Street, a stone's throw from Selfridges

I have often walked south from Oxford Street along Duke Street, and always noticed the raised pavilion with a dome on the right. It stands in what appears to have once been a square. The dome surmounts four neoclassical porticos each supported by a pair of columns with florid capitals. I have always wondered about it, but until recently did nothing about researching it. It was only lately that I explored it and its companion on Balderton Street, which runs parallel to Duke Street. 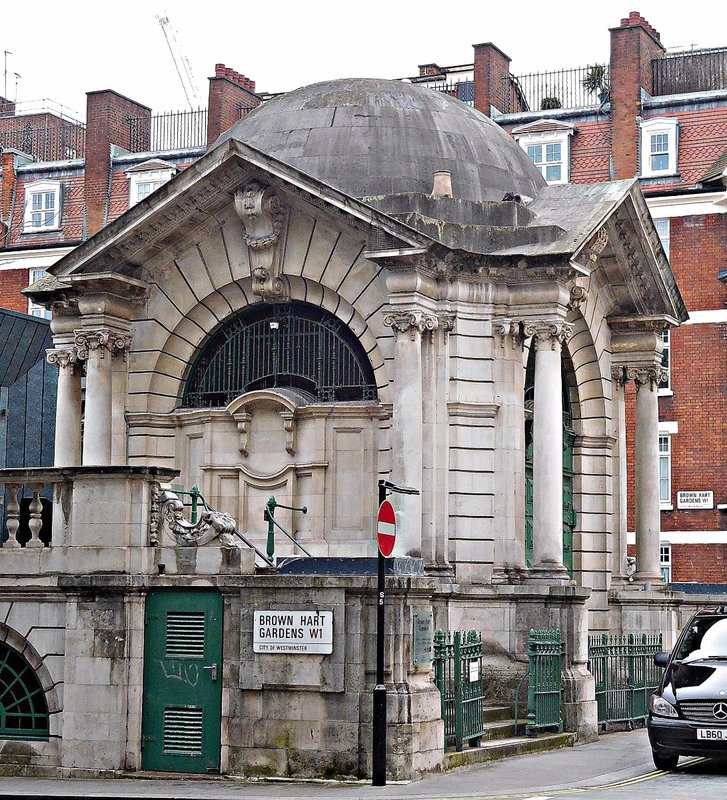 We had arrived early in Balderton Street, where we were meeting foreign guests at their hotel, the Beaumont. With time to spare, we took a closer look at these pavilions. Staircases on either side of both pavilions lead from street level to a raised or elevated roof garden, which is about twelve to fifteen feet above street level. There is also a lift. The garden looked recently designed, and at the Balderton Street end there is a modern café that looks like an elegant glass shoe box. 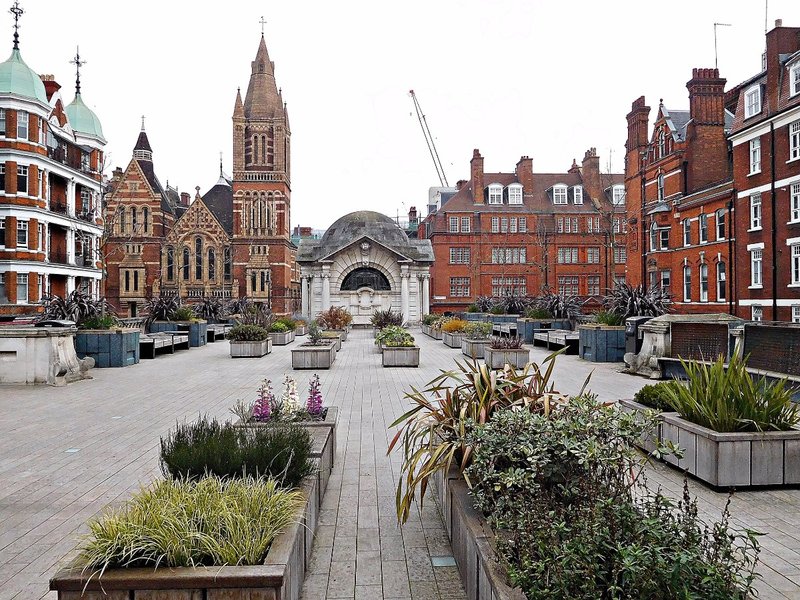 The raised structure with its roof garden, café, and pavilions occupies the centre of a rectangular ‘square’ surrounded by mostly residential blocks on three sides and the aforementioned hotel on its fourth. It occupies the space that would usually contain a garden in London squares.

The garden and the building upon which it stands form the centre-piece of Brown Hart Gardens.

From “Survey of London: Volume 40, the Grosvenor Estate in Mayfair, Part 2 (The Buildings)”, we learn that:

“…plans were in preparation for the complete rebuilding of Duke Street and for the blocks of industrial dwellings that were to be built around Brown Hart Gardens in 1886–8. The new Duke Street appears to have been conceived as a street of shops with somewhat better-class flats over, acting as an intermediate zone between the blocks round Brown Hart Gardens to the west…”

When the gardens and its surrounding buildings were being planned, The Duke of Grosvenor, the landlord of the Grosvenor Estate, wanted (according to the Survey, quoted above):

“… to have a ‘cocoa house’ or coffee tavern and a public garden. The coffee tavern was dropped for want of an applicant, but the I.I.D.C.'s contract included an undertaking to clear a space and provide a communal garden on the site between Brown Street and Hart Street. The Duke soon took over the garden scheme except for the surrounding railings, and in 1889 it was constructed to the layout of Joseph Meston …”

“…The simple garden included a small drinking fountain at the east end, a urinal at the west end and a shelter in the centre; trees were also planted. None of these features was to survive long…” 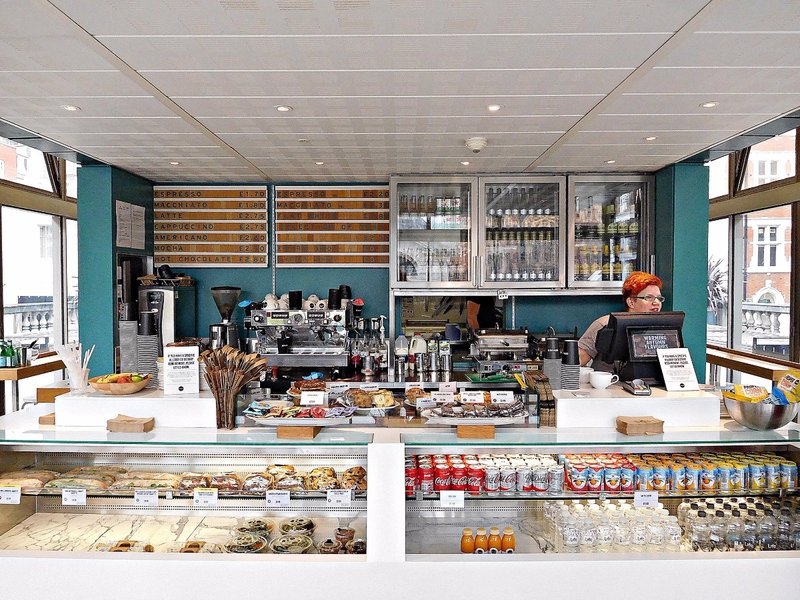 These features disappeared as did the garden itself. For, in 1902 the street level gardens were cleared away to make way for the construction of the Duke Street Electricity Substation. Partly above ground and partly below, this electrical facility was completed in 1906. It was built for the Westminster Electric Supply Corporation to the designs of C. Stanley Peach (a leading architect of electrical installations), with C. H. Reilly as assistant. The domed pavilions at either end of it were part of the original design. The Survey describes the building well:

“As built, the sub-station rose to a greater height than had been contemplated but retained Peach's original layout, with a tall 'kiosk' or pavilion and steps at either end, a balustrade all round, and Diocletian windows along the sides to light the galleries of the engine rooms, which occupied deep basements.”

The company had managed to persuade the Grosvenor Estate to demolish the gardens because they said that they were being used by disreputable types. Of course, the presence of the new electricity building deprived the residents of the square of their garden.

The residents protested. The electricity company laid out a garden on the roof of the substation, using trees planted in tubs. According to the Survey (quoted above):

“…the 'garden' is perhaps the only place in London where quarrelling is specifically forbidden by law.”
The garden survived until the early 1980s, when the then lessees of the plot, the London Electricity Board, closed it to the public.

In late 2007, the City of Westminster decided to spend money on improving public spaces. On the 7th of December 2007, its Press Department issued a release that included the following:

“Brown Hart Gardens, which has a closed off elevated 10,000 sq foot stone deck with two listed early 20th century domed features - is one of three schemes set to benefit from a proposed multi-million renewal of the open spaces and streets surrounding three of Grosvenor's sites across Westminster….
… The proposals could see Brown Hart Gardens become a distinctive destination, opening up the square for the first time in two decades and possibly adding some much needed greenery to the area.”

The gardens were re-opened to the public after more than twenty years.

In 2012, the gardens were closed once again, but this time for a short period. They opened again in 2013, having been fully and beautifully refurbished by the Grosvenor Estate. 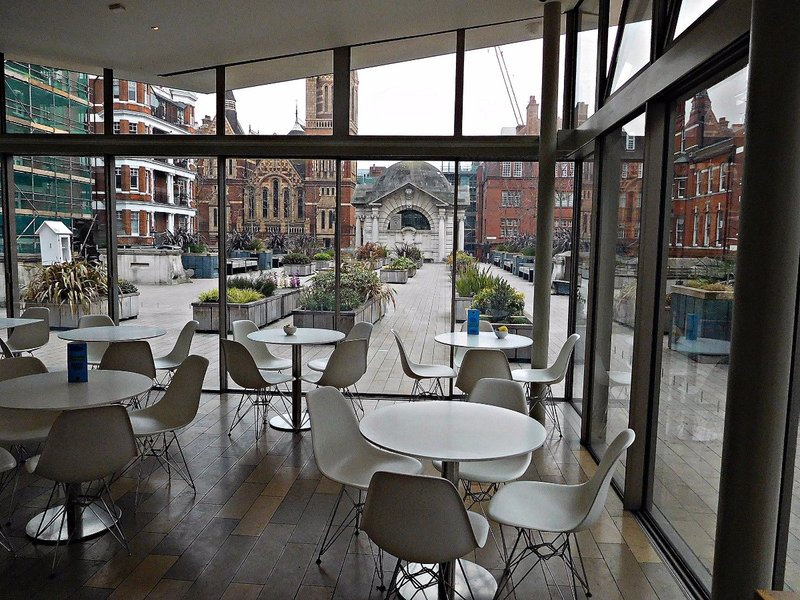 The restored roof garden contains a café, currently managed by the Benugo chain. This contemporarily designed café is almost entirely surrounded by huge glass windows, making the place feel light and airy. Situated at one end of the Brown Hart Gardens roof garden, this place offers a lovely view of this horticultural oasis. So, finally, the former Duke of Grosvenor’s desire to have a café in his square has been realised. 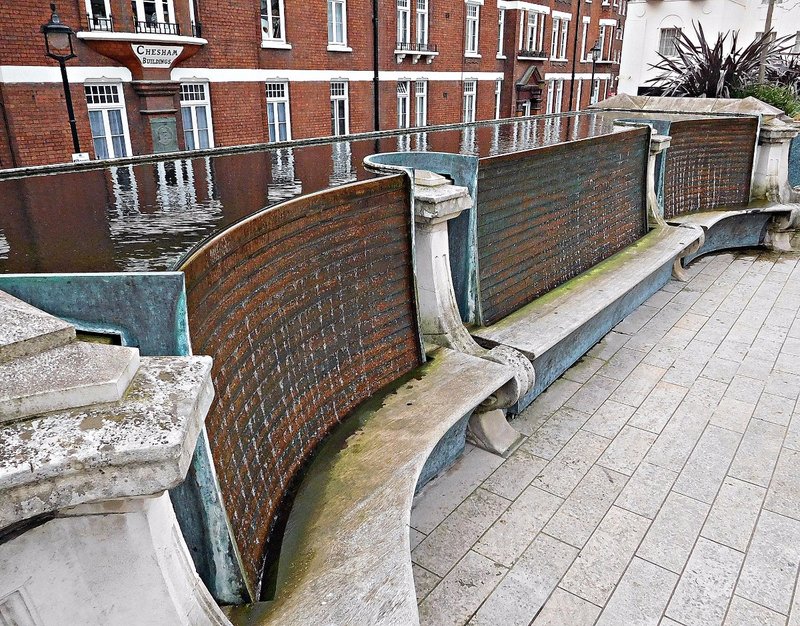 The garden also contains a water feature designed by Andrew Ewing. The numerous planters (plant pots) and benches can be moved around to change the layout of this pleasant garden.

West of the gardens, there stands the Beaumont Hotel. I have not stayed here, but some friends, who were, showed us around the place, including their suite of rooms. 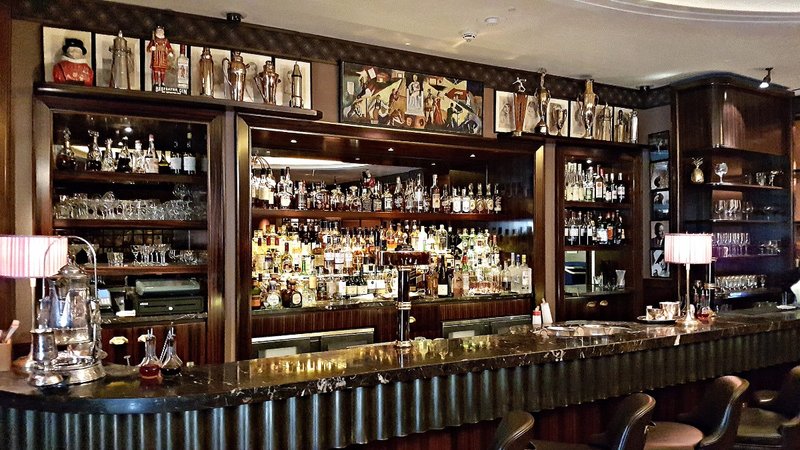 Stepping into the lobby is like walking out of the 21st century and right back into the 1920s. The whole hotel is decorated in the art deco style, but it is all recently built - the hotel only opened in 2014. So, what you see is 'neo-Art Deco'. But, its brilliantly done. 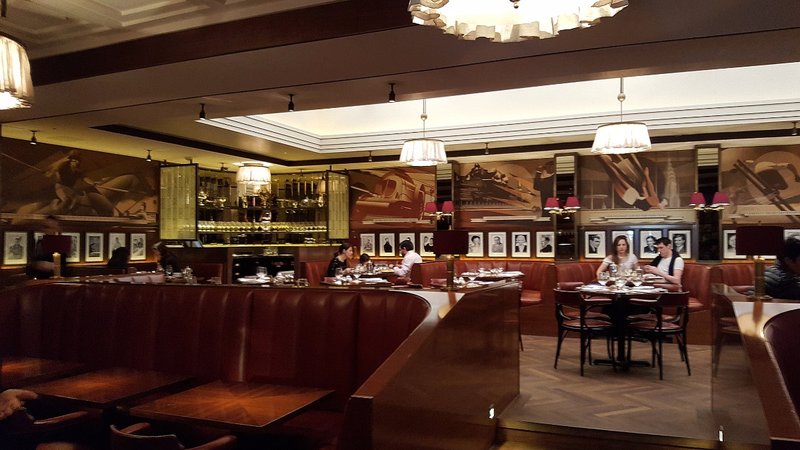 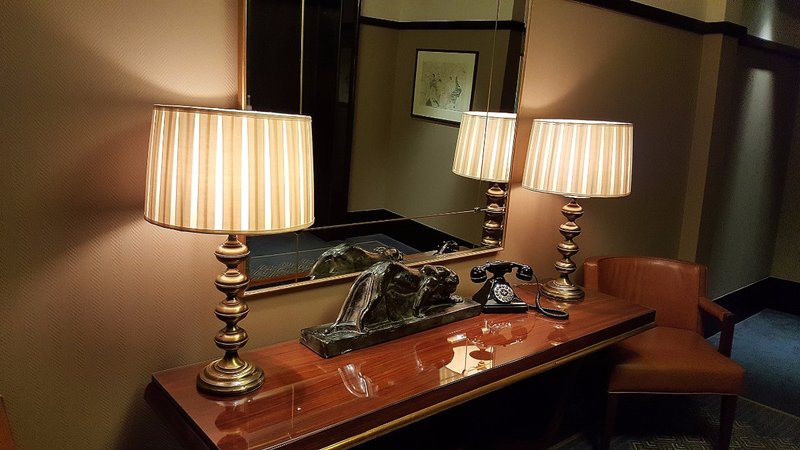 Our friends' suite of rooms was also decorated in the 1920s style. It was immaculately equipped with a comfortable bed, spacious cupboards and dressing rooms, a range of magazines, a bookshelf filled with recently published books, drawers full of luxurious snacks, a coffee-maker, and so on. The en-suite bathroom was spacious and superbly equipped. 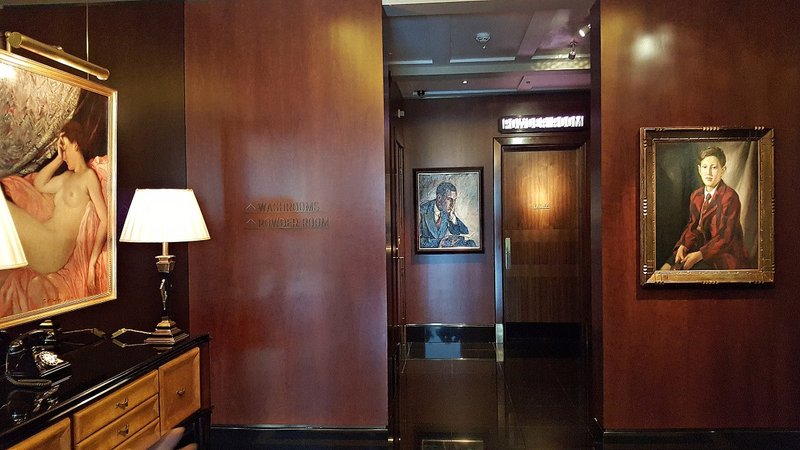 This is a hotel to head for if money is no problem.

Brown Hart Gardens is only a few yards away from Selfridges and busy, crowded Oxford Street. Yet, when you reach this square, you feel as if you are miles away from the commercial chaos of London’s West End, possibly even in the heart of the countryside. 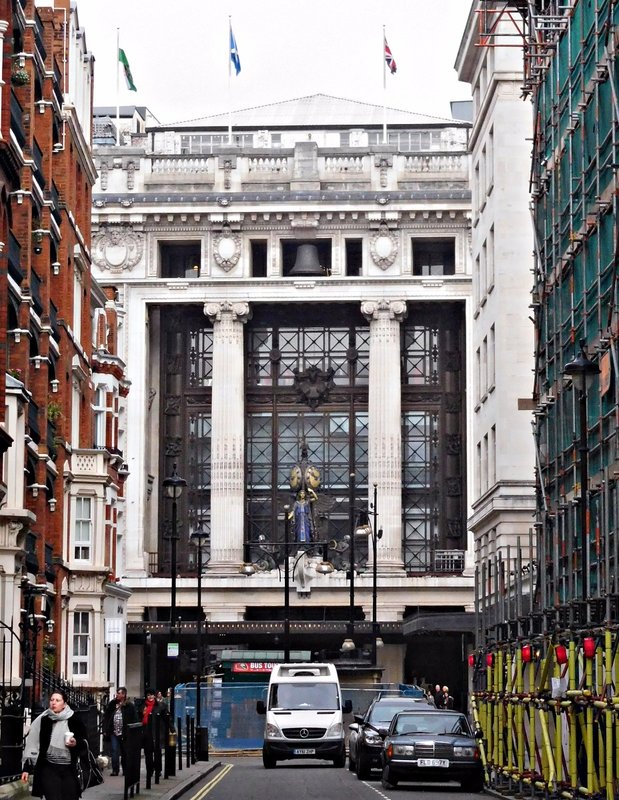 Brown Hart Gardens provides a welcome respite from retail hustle and bustle. According to the people working in the café, few realise that it exists and it is quiet for most of the day apart from lunch time.

I like the idea of a garden where "quarrelling is specifically forbidden by law." I wonder if that could be expanded to include a larger area . . . ;^)

Oh this is interesting! I was there in 2008, and those days there was a very delicious restaurant, Allen's. But that is gone (someone at VT told me)