WOOLWICH - above and below

Retired cinemas, a ferry, a station, and a tunnel

My wife is a legal professional. Her work takes her to courts all over Greater London. When I am not working, I often meet her near a court, where she is working, for lunch or a snack. Recently, she was working at Woolwich County Court, near which I met her for lunch (at the good Granier Cafë in Powis Street). After lunch, I headed north a short distance to wards the River Thames.

The name Woolwich might be derived from the Anglo-Saxon words meaning 'place for trading wool'. What was once a small town used to be in the County of Kent, but is now part of the London Borough of Greenwich. 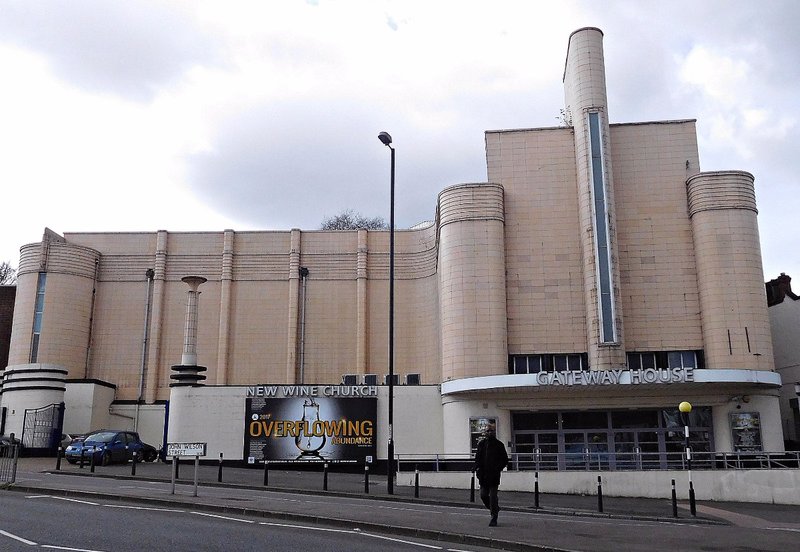 Within a few yards of the Thames bank and several feet above it there stands Gateway House. This magnificent art-deco building designed by George Coles and built in 1937, used to be the Odeon Cinema of Woolwich. Since about 2001, it has been used both as a conference centre and a religious centre. 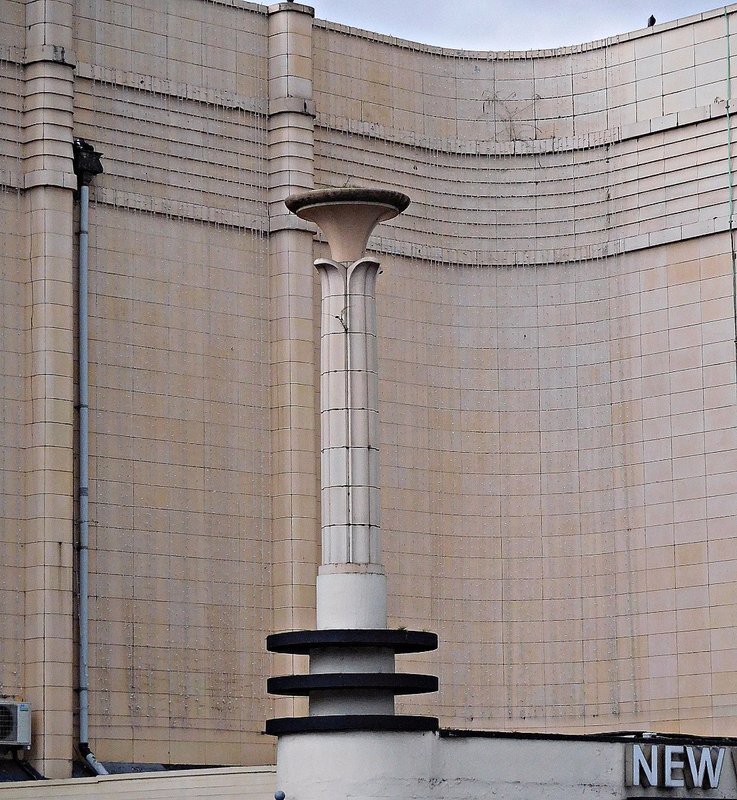 Across the road from Gateway House, there stands a brick building that calls itself 'The Cathedral', or CFT Cathedral (Ebenezer Building).
Formerly, this building housed the Grenada Cinema. It was opened four months before the Odeon, which it faces, and it could seat an audience of almost 2500. Designed by a team that included Cecil Massey, Reginal Uren, and Theodore Komisarjevsky, it is now used and maintained by the Christian Faith Tabernacle. This organisation also restored what had once been a luxurious cinema to its former glory.

Theodore Komisarjevsky (1882-1954) was Russian but born in Venice (Italy). Apart from being a noted theatre director and designer, Theodore is also famous for having taught the influential Russian theatre director Konstantin Stanislavsky. In London, he designed a number of theatre and cinema interiors, of wihich the Grenada in Woolwich is a fine example. 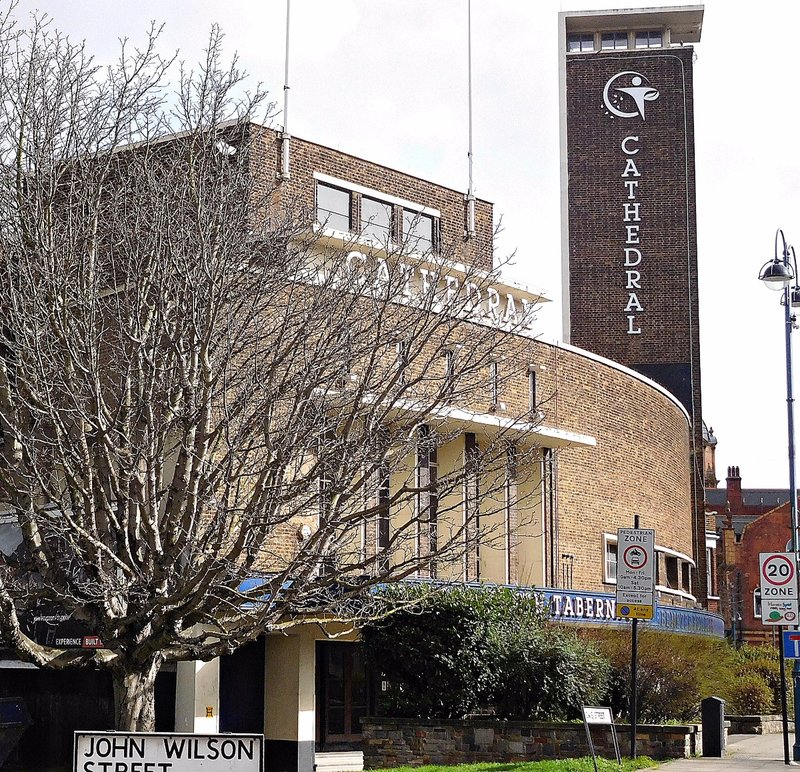 These two ex-cinemas were not actually where I was heading, but they caught my attention, and have proved to be of interest. Sadly, i was unable to enter them. My aim was to reach the nearby WOOLWICH FREE FERRY. 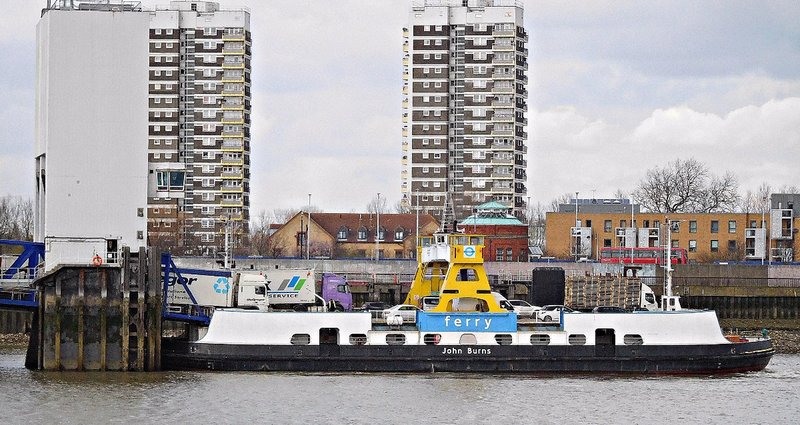 There has been a ferry across the River Thames at Woolwich since the 14th century, if not before. Various ferry services crossed the river hera at woolwich between the 14th and the 19th centuries. In the same year as the Eiffel Tower was completed, 1889, the 'modern' ferry service was inaugurated using a paddle steamer. As motor traffic increased during the ealy 20th century, the idea of a bridge from Shooters' Hill to East Ham was discussed, and rejected, in the House of Commons. During the 1960s the ferry service was improved to handle the large volume of traffic more efficiently. 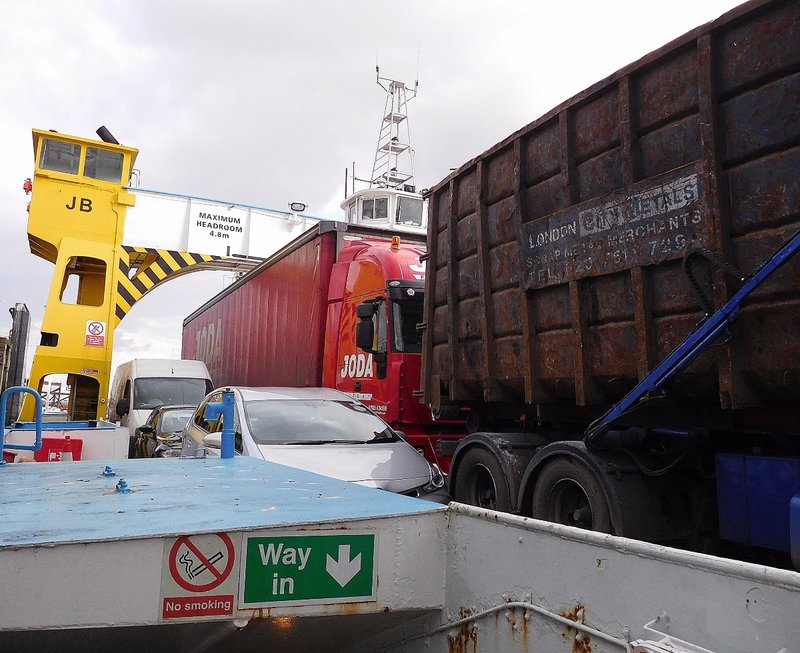 In 2015, more than two million passengers (foot-passengers, vehicle drivers, and vehicle passengers) used the ferry service. Of late, pedestrian usage has decreased, but there has been no diminution of vehicle users. To this day, the ferry is FREE OF CHARGE for both vehicle users and footpassengers. This is in common with the nearby Blackwall Tunnel. Further downstream, the newer Dartford Crossings attract an ever increasing toll payment.

I walked down to the embarcation pier. Looking across the river you can see the northern terminal of the ferry, and also watch 'planes landing and taking off from nearbt london City Airport. Looking upstream, you get most wonderful views of the skyscrapers of Canary Wharf, and in front of them the sections of the Thames Barrier that operate the barrage gates.

Two ferry boats operate simultaneously: one leaving the north terminal at about the same time as the other leaves the southern one. I waited at the pedestrian gangplank until the ferry was ready to board. 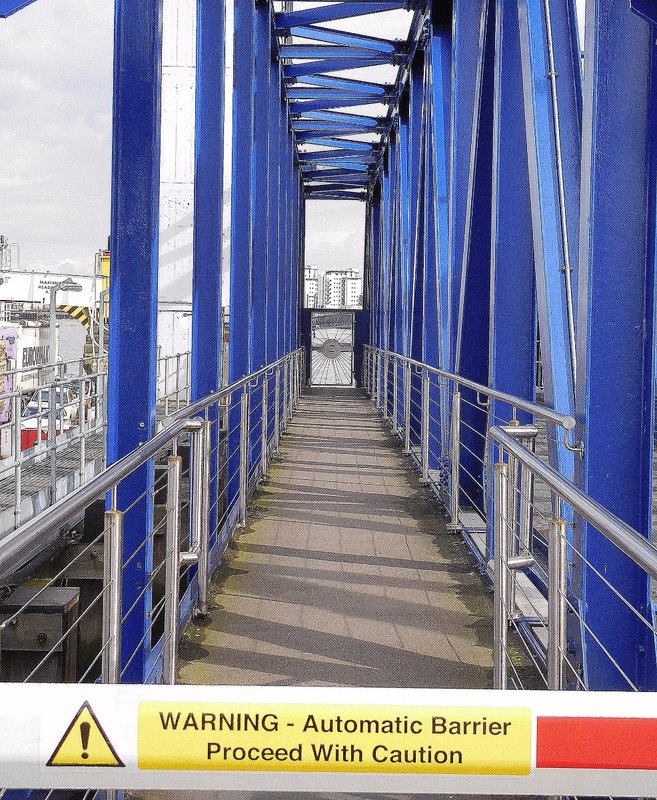 Passengers travel under cover below the car deck, which is open air. 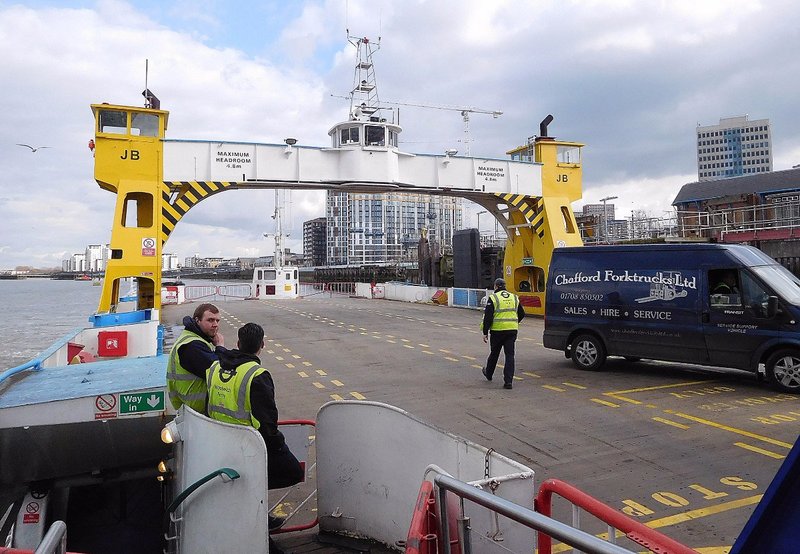 The passenger accomodation is spacious, but a little bit 'spartan'. There are plenty of benches on which to rest during the less than five minute long voyage. 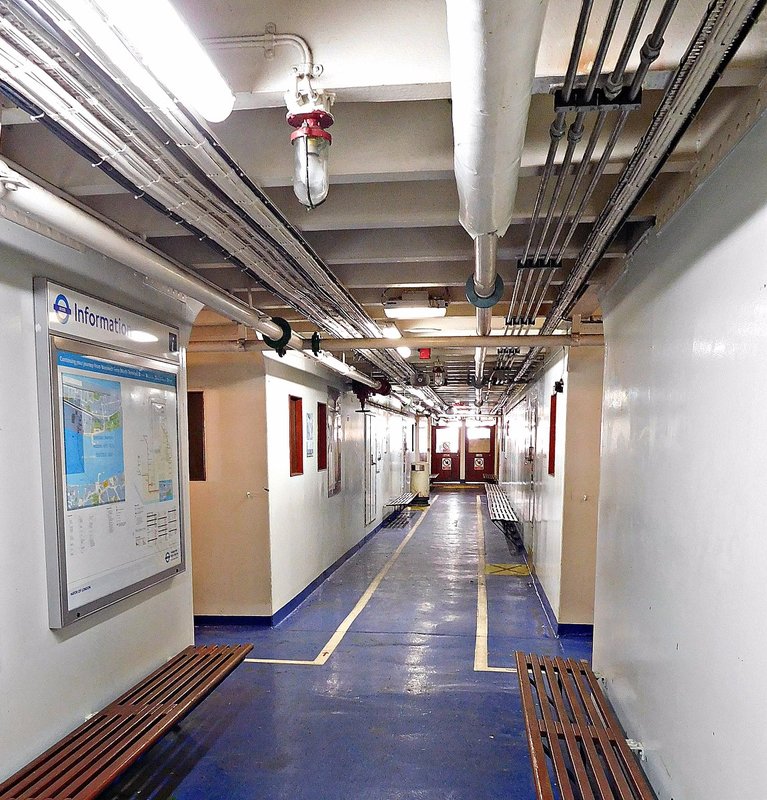 From the passenger deck, views are somewhat restricted because there are limited openings through which to see what is outside. 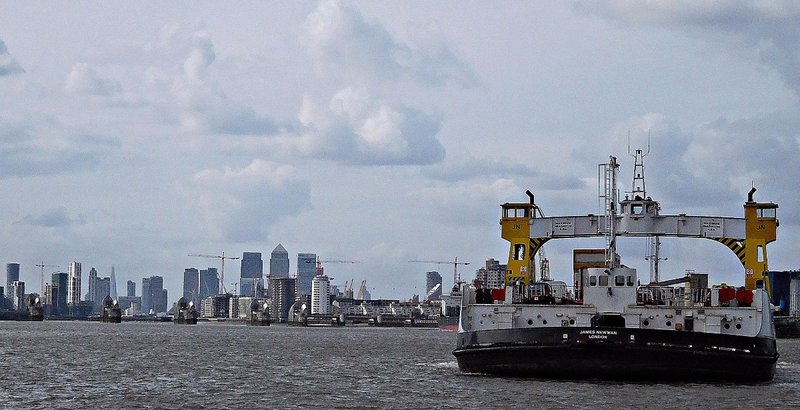 The observant ferry user will not miss noticing that close to each terminal of the ferry there is a small circular building made out of red bricks. 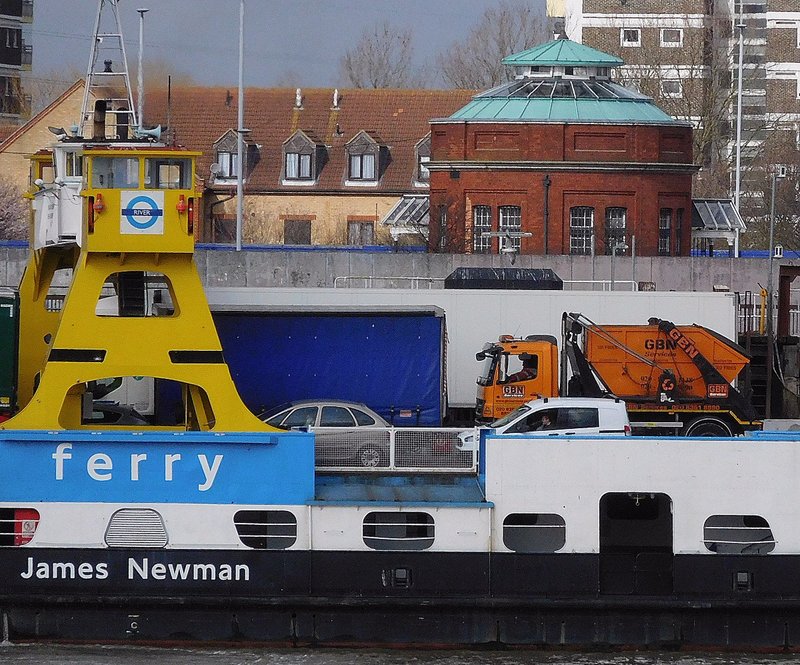 These two small, round, red brick buildings with conical roofs mark the northern and southern access points to another way of traversing the river Thames: THE WOOLWICH FOOT TUNNEL. Like the ferry, the use of this tunnel is free of charge. It is for use of pedestrians only, not cyclists. 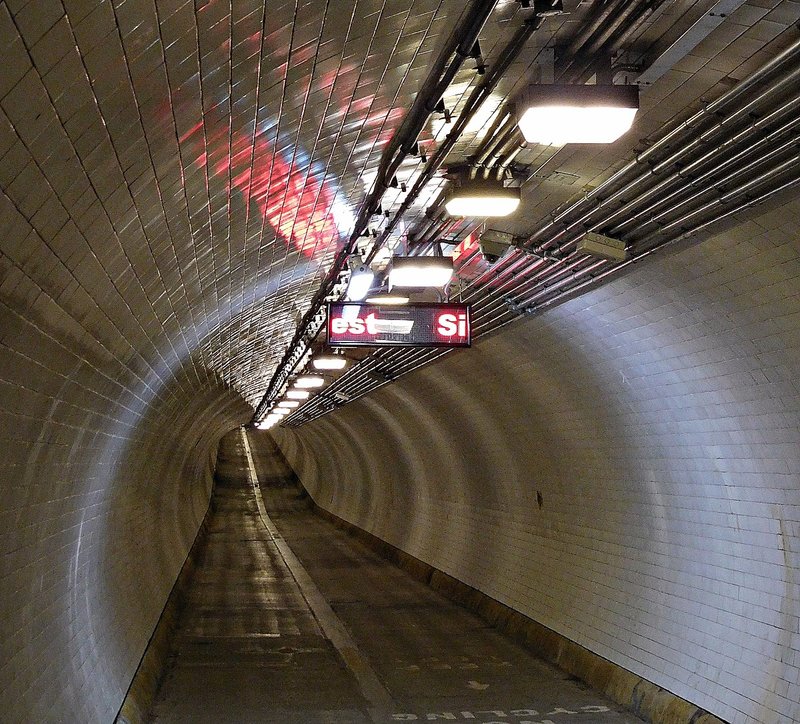 Opened in 1912, the tunnel is 504 metres long, and about 3 metres below the river bed. It is fitted with a system that allows mobile telephone users to use their phones whilst in the tunnel. There are two ways of reaching the tunnel from the surface: 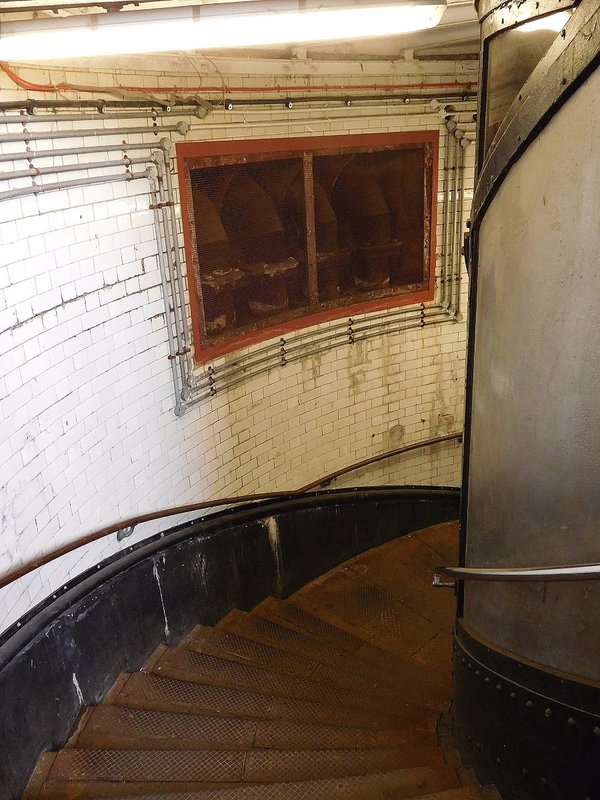 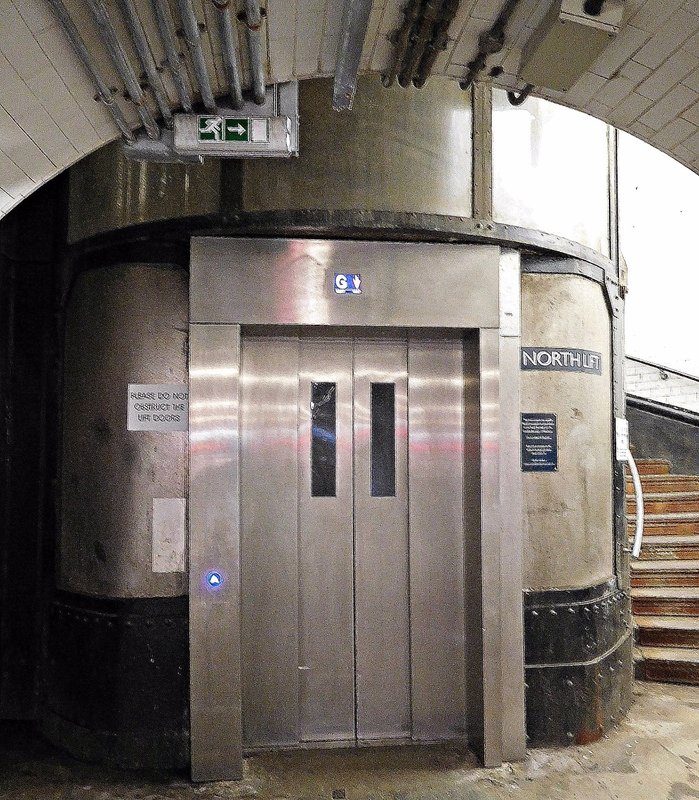 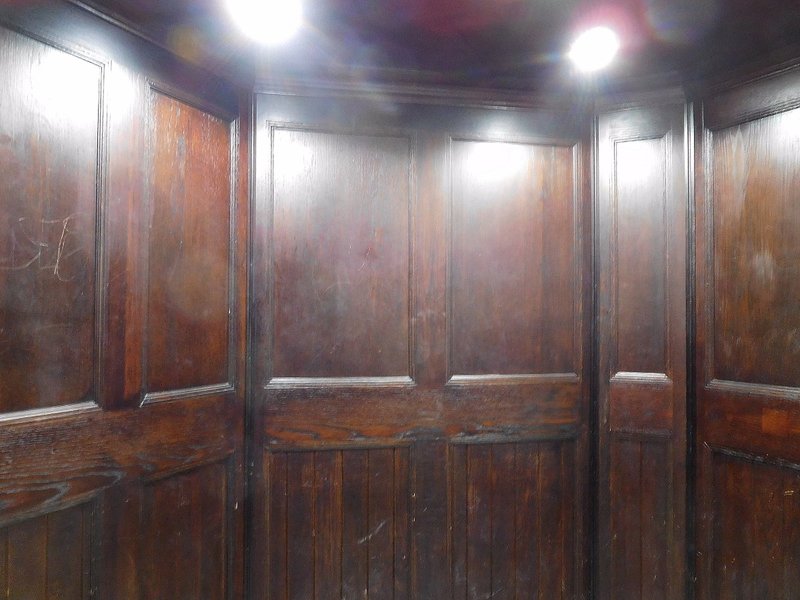 Woolwich Foot Tunnel: inside the lift

The tunnel is for the more energetic traveller or for those who get seasick easily. It also 'operates' when the Woolwich Free Ferry is not working. 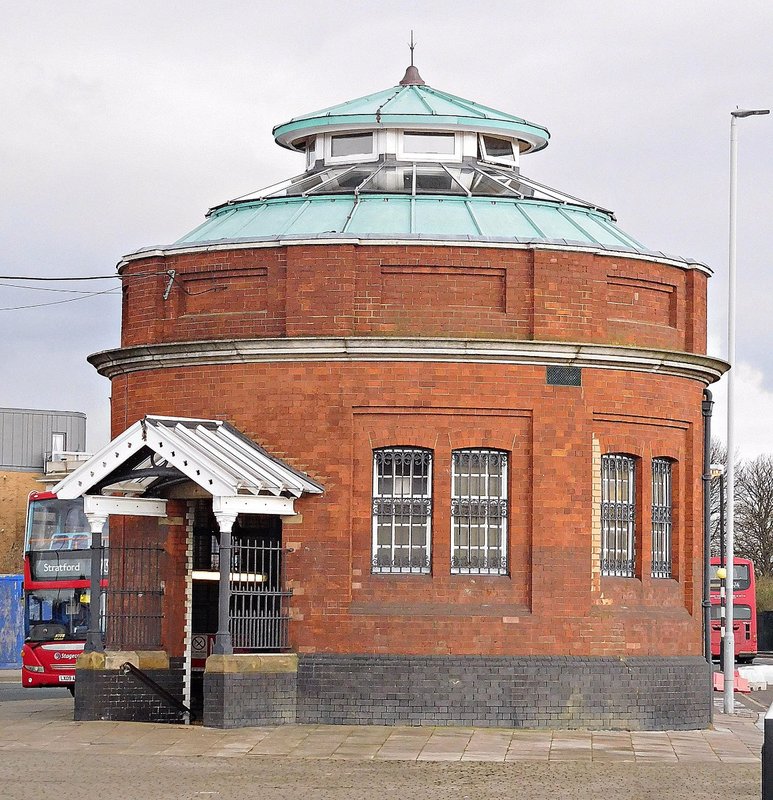 Beyond the northern terminal of the ferry at North Woolwich, I came across the OLD NORTH WOOLWICH STATION 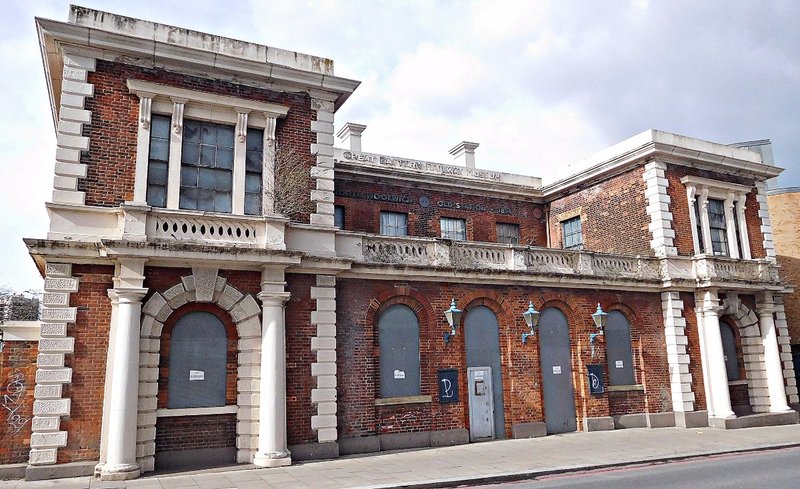 Its windows are boarded up, and from what one could see through the railings surrounding its rear, it is falling to pieces. This was once North Woolwich railway station. The lovely red bricked building that dates back to 1854 served as the ticket office until 1979. 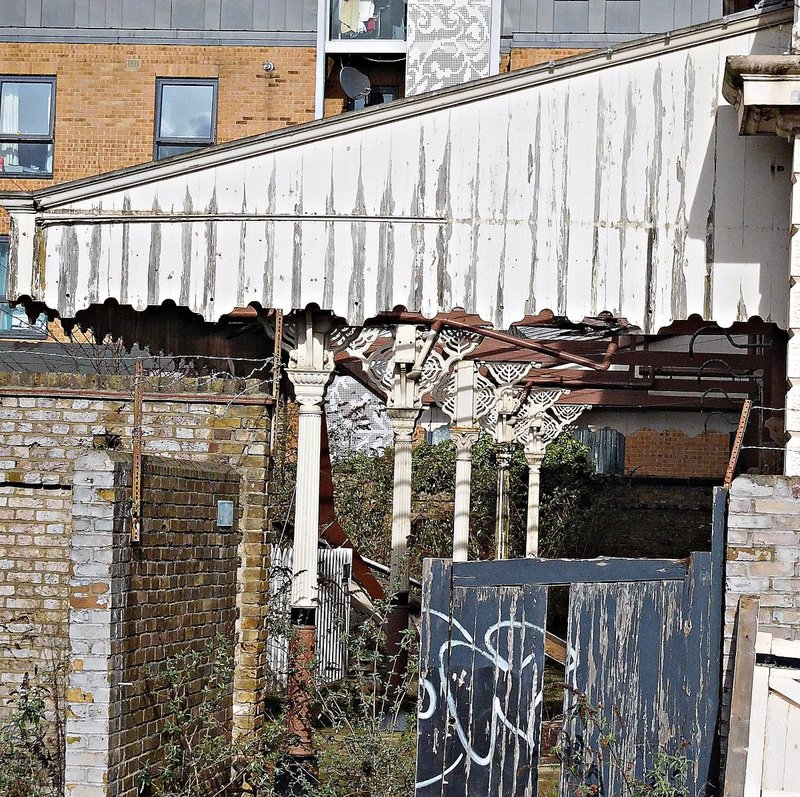 Between 1984 and 2008, this disused station was used to house a museum. It has been closed for years. I have no idea what the future holds for this fine example of station architecture. I hope that it will not be demolished. 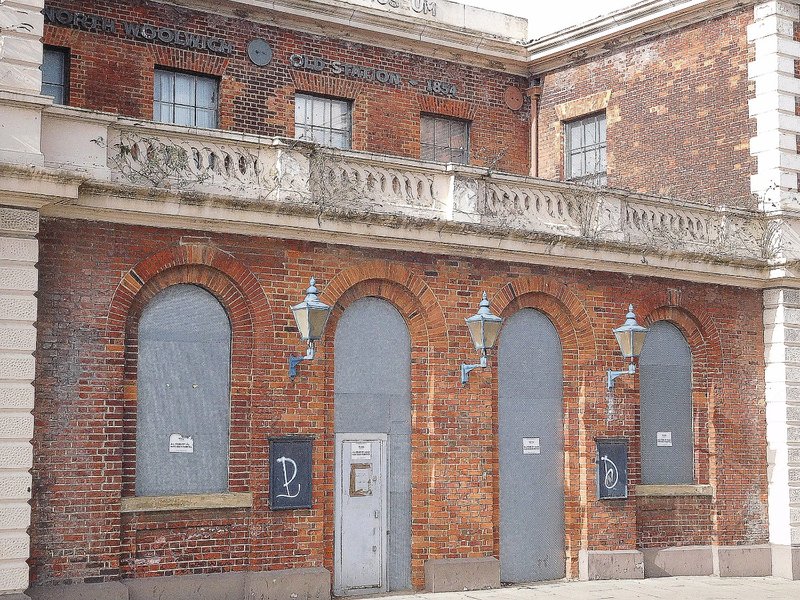 So, what started out as being my desire to travel on the Woolwich Free Ferry has ended up as being an excursion filled with interest.

Another great review here Adam,I done the cycling from Wapping to North Woolwich a few years ago and that it was very interesting as i went past the old Tate and Lyle sugar factory and that it was a very interesting area. Just across the derelict station of North Woolwich there's a lot of old ship items that were found in the area when it used to be functioning.I have got photos somewhere but i will be cycling down there again on Monday and i take again the photos.